In my previous series of postings (first, second) on how to separate the art from the fractals, I basically say that the only way to do more with fractals than simply create computer crafts is to focus on producing works of abstract expressionism or landscape/place.  These are the only two existing art genres where fractals seem to gain any traction.  This is where the artistic talent of fractal algorithms really start to shine.  Everywhere else fractal programs function as nothing more than The Kaleidoscope of the Computer Age, a magical toy that makes everyone feel they’ve captured the genie in Aladdin’s lamp and become rich.

On a side note, I was recently contacted by Paul Griffitts, a fractal artist whose work fits in well with the Benoit Mandelbrot Fractal Art Exhibitions that occurred several years ago in Spain..  Paul’s vision of fractal art is dramatically different than mine as can be easily seen by the work he produces.  But Paul’s work, despite being made in the 3D fractal program, Mandelbulb3d, doesn’t exploit the landscape or “depiction of place” potential that this new fractal programming presents and for that reason is a good teaching example of why fractals so often fall short of becoming more than just colorful imagery.  However, another of Paul’s images that I will present is something that shows real potential in a way that startled even me.  Fractal art is full of surprises.

~ Click on images to view full size on original site ~ 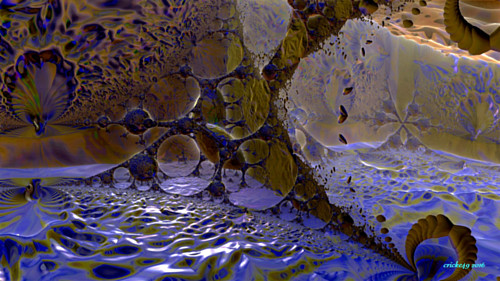 Folks, don’t be fooled by the homey Christmas theme here, I cried out, “Son of Dali!” when I saw this one just a few weeks ago.  It’s full of the “window-worlds” of micro imagery that often pour forth and drain back into the limitless panoramas of Salvador Dali’s fragmented surrealist symphonies.

The ornate spiderweb fractal thing is not terribly important; it’s the three dimensional landscape and places to be discovered in the web holes and and room dividers of the image.  The simple blue palette is almost “anti-fractal” in its muted appearance but the strong reflective light on the snow (ice?) in the left foreground pours a strange kind of life into the image’s deserted panorama.  It’s “full” of emptiness.  As well as additional rendering in Twisted Brush, if I’m reading the Fractalforums.com gallery page notes correctly.

This is the kind of mental dimension that I’ve been saying marks the difference between artistic imagery and the purely “nice to look at” imagery that is craft or decoration or ornament.  They function differently and as such the two types of imagery get different receptions.  Not everyone will get the same sort of mental thrill out of this image by Crike49 that I do, but I have enough confidence in my perception of art to say that it’s not just all in my own head.  People argue all the time about the relative merits of artworks.  Click on it and view it full size on Fractalforums to get a heaping eye-full. 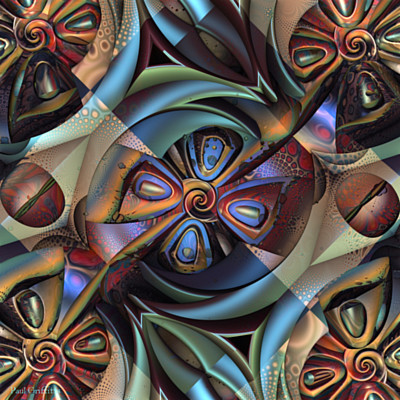 Believe it or not, this was made with a 3d fractal program and not Ultra Fractal.  I find it intriguing how Paul would pursue a type of traditional fractal imagery, ornamentalism, with a program that has been blowing the doors off business as usual in the fractal art world.  This is what I mean when I said Paul has a different vision for fractal art: he’s not afraid of sticking with the conventional 2d style of fractal art that could almost be labeled retro (note the spirals).  The 3d capabilities of the Mandelbulb3d are utilized in a muted way here just to provide a bas-relief or embossed effect rather than the deep panoramic landscapes that Crike49 presents.

Paul’s work is oriented around a very different aesthetic and naturally that’s his prerogative as a creative artist; what I’m arguing is that the elegant design approach to fractal art is actually rather limited because it speaks a much simpler language than landscape and place does and for that reason all one can say is “beautiful” over and over again as variations on a theme.  It’s a niche, and not a very deep one despite it’s prevalence in the fractal art scene for decades.  There was a time when that’s we all had to work with.  It’s ironic that the new software is being used to make the old art.

And now for something completely different 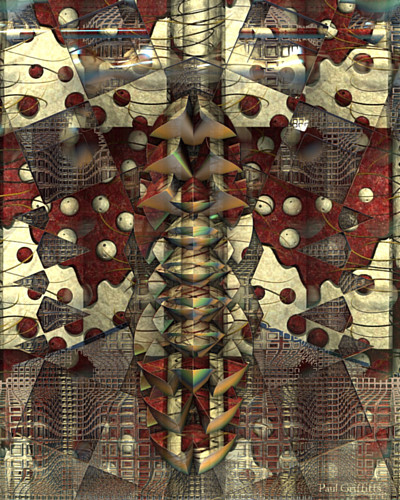 If you remember what I wrote about fractals and portraits you will know that I basically said that fractals can’t make portraits because the human form and especially human facial expressions just don’t happen with fractal algorithms in the same way that landscapes and wild abstract expressionism does.  So the guy I just labeled as “retro,” and using the same program as before, created this “impossible” fractal portrait: he broke the fractal portrait sound barrier.

If you don’t see the portrait that’s okay.  I don’t think Paul saw it either, but that’s what art criticism is here for: to sharpen your perception.

A picture says a thousand words and this one should do it: 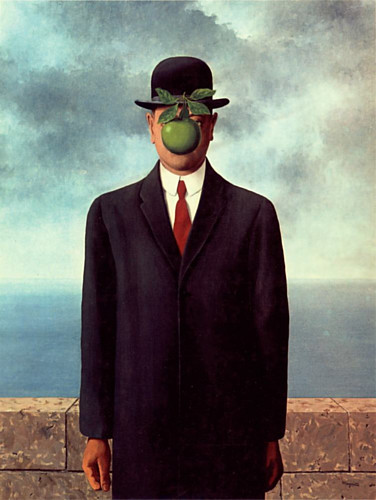 Son of Magritte!  Notice how well Magritte avoids the human face in his portrait.  It’s almost become a sub-genre in surrealist art, putting an apple or anything else in front of a human face to obscure the expression in a startlingly expressive way.  I think the most widely accepted interpretation of Magritte’s floating apple in front of the face is that people hide behind things and so a more accurate portrayal of people is actually what obscures them rather than the “real” person behind the apple.  If the existentialist quote is true: “man invents himself” then this portrait by Magritte would say: “man becomes his deception”: we are what he hide behind: our choice of masks betrays our identity.  Ironic, iconoclastic and well worth the effort it takes to produce a painting; not to mention the numerous art discussions it has spawned.  Perhaps Magritte just like painting stuff that was startling and it was his audience that invented the “man hides his true face” explanation.  The paint never dries on a surrealist artwork.

Back to Paul’s image: surely you must see the portrait now: there’s a suit jacket, a shirt collar, a tie; and the clothing pattern reiterates itself into the face which appears, like Magritte’s in basic shape only, a sort of “your face here” portrait template that could fit as the (male) avatar for our age.  Paul made a piece of “art”.  Compare how it functions with this extremely famous one: 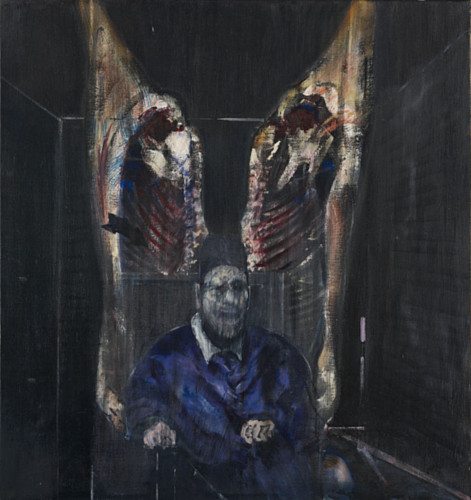 Figure with Meat by Francis Bacon, 1954

Nobody worth his gallery coffee shop latte argues that this isn’t “art”  And what does it mean?  What is it saying?  Many artists are silent on what they’re work “means” or “says” and I think one reason is that they themselves aren’t completely sure about what it’s saying or meaning and they don’t want to appear ignorant.  Art is not always deliberate or intentional and just as I said the paint never dries on surrealist art, it’s pretty slow to dry on many other kinds, too.

One of the things the study of psychology brings to art is the understanding that we don’t always know why we do things and therefore an artist may not fully understand what it is that creates the impression they get from their own work.  How much less the impression their audience gets.  Or doesn’t get?  Furthermore, in different cultural contexts and even different generation contexts I’m sure “the” message of almost any artwork can change.  I’ll bet no one looks at Paul’s, Untitled May 18 2016 the same way anymore, now that I’ve reinterpreted it.  That doesn’t mean I’ve made them like it or not like it, art is too complicated for such crude words; a useful interpretation is one that helps people decode their own impression of an artwork.  At its best, a useful interpretation allows the viewer to see greatness in an artwork that they’d previously passed over.  It’s the same with movies, books and music, too.  Art isn’t always obvious but beauty is.

Where art grows on trees

Looks pretty “fractal” doesn’t it?  Not in the usual way but in the sense that it’s very geometric and detailed.  What transforms this image from just an example of freaky fractal feedback into art is the expression of an idea: art factory.  The little mondrian frames are each quite unique and the medium sized one in the right bottom edge ground (bottom second column from the right) with it’s yellow color scheme has an almost deliberate artistic touch. Move up two frames to the little louvered thing and the impression of sunlight and the outdoors is a sharp contrast to the factory, although it might represent the final installation of a factory made ventilator outlet.  Could this be the raw artwork for a sales brochure?

But the strongest of all themes and ideas represented here is the recursion of the frames in several places that clearly suggests mass production all over the place.  So much everywhere and leading back into an endless supply of more.  It’s almost a comment on fractals: cheap and perfect.  I doubt Jock was thinking of that, but I’m sure the theme of recursion is what caught his eye when he made this one and picked it out from his explorations.

This one is an example of both place as well as abstract expressionism.  Notice how in the top right corner of the largest recursion example, in the top mid-ground, the pattern becomes just squares on a black background in an Escher-esque dissolving into simple shapes way: substance becomes symbol.

Then there’s the simple blue frame triplet in the top right corner.  It looks like the view out of a window overlooking the sea, and again in contrast to the darkened factory imagery this outdoor and minimalist view suggests the intervention of human artistry, but I’m guessing it’s just one of those fractal accidents that one has to keep their eyes peeled for when browsing raw fractal imagery.

Fractals are a different kind of medium and I guess in the end that’s what makes fractal art so hard to explain, as well as so hard to make.  We think we’re the artists but we’re really the audience.  Our role is different and it’s more about looking and sensing than it is about making and doing.