The purpose of this posting is to show you that an old, point and click program operating in grayscale can be more creative and artistically profitable to use than a cutting-edge fractal flame renderer like Chaotica or JWildfire.  Should you happen to agree with that conclusion, the question then arises: “Why is there so much more interest in a program like Chaotica and JWildfire among fractal artists than there is in one like Kandid?”

Hands up everyone who’s ever used Kandid

Nobody’s even heard of Kandid except for me.  Kandid is a java-based genetic art program from 2002 that features several kinds of algorithms including an Iterated Function System Affine Transformation; Voronoi Diagram; Cellular Automata and a bunch of other things.  By far my favorite is the IFS Affine Transformation in Grayscale mode.  It can operate in color modes but the results are always awful.  Kandid’s Sourceforge site.

Most fractal artists work with “advanced” programs that require them to make most of the creative decisions and which leads to a creative process that revolves around their guidance and direction and therefore produces work that is largely an expression of them.  This is micro-managing the algorithms and really interferes with mechanical creativity.  The more you’re involved in the decision making process the more you’re to blame for the results of it.

Why do they do it?

Only deliberate, “intelligent” control can make fractal algorithms produce consistently themed imagery.  I think the tastes of fractal artists have become so stylized over the years that only conventional themes interest them anymore because only those things attract the attention of their peers.  I would characterize the fractal art world as a craft community where technique and refinement rather than the iconoclastic attitude of an art community is the driving force behind new works.  Fractal art is now oriented around fractal artists rather than fractals.  It’s a social scene.  But I think most art groups eventually evolve into that, so it shouldn’t be much of a surprise.

The Art Gallery of Doctor Moreau

Kandid is a genetic art program and makes new things in an entirely different way.  There is no artist needed or even any way for one to get involved.  It’s a purely mechanical process with the exception of selecting pairs of images to “breed”.  Can you call yourself an artist when all you do is check off two pictures and then watch them “breed”?  I don’t really see these things as my artwork or identify with them personally because they’re entirely the result of Kandid’s automatic gene shuffling and random mutation.  In a farming context, my role would be described as that of a breeder.  Any personal resemblance between me and my horses would be absurd.

~ Click on images to view the larger size version ~ 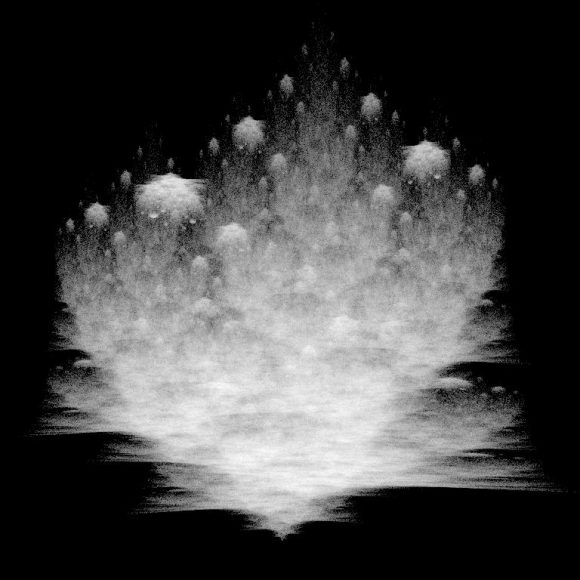 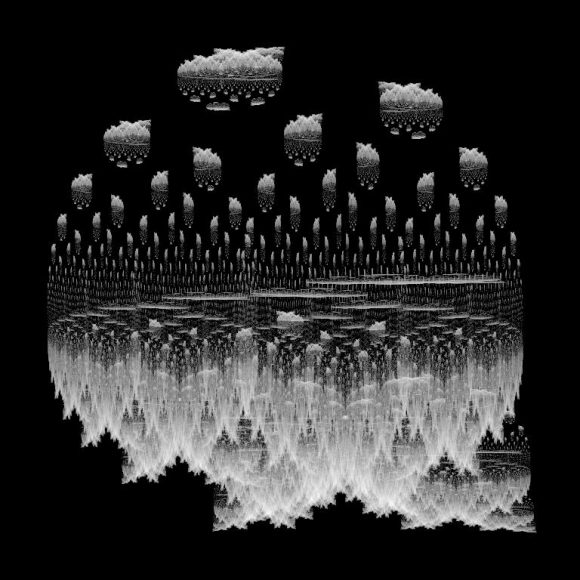 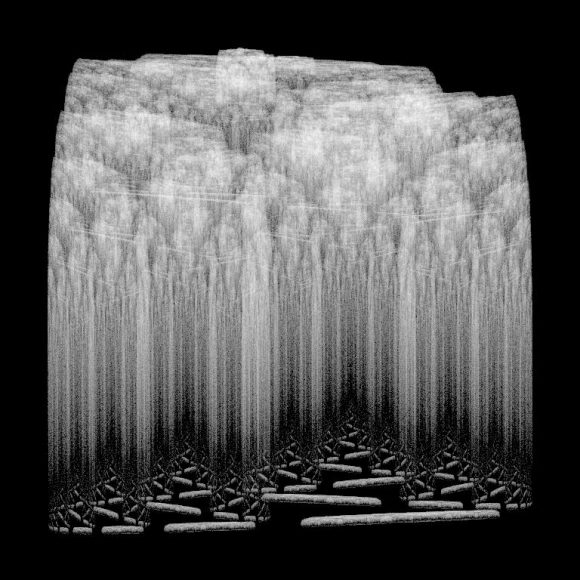 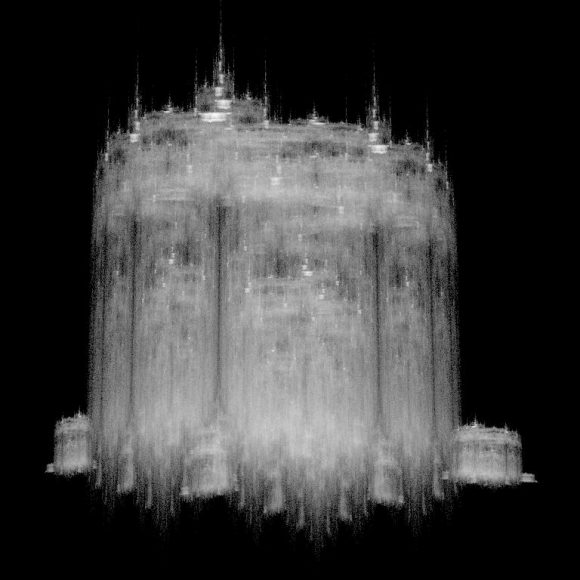 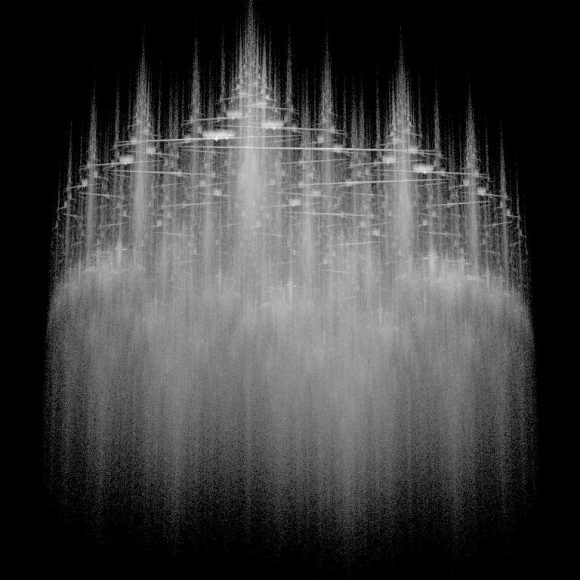 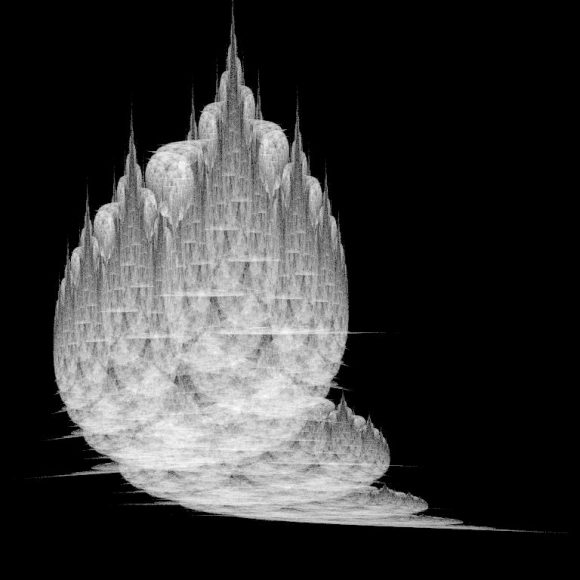 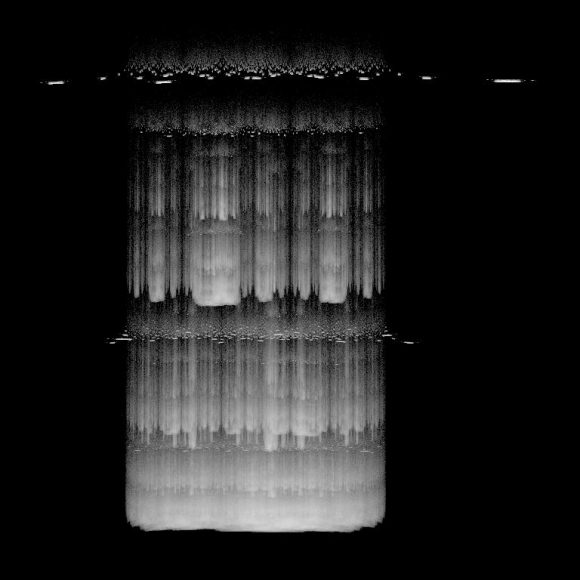 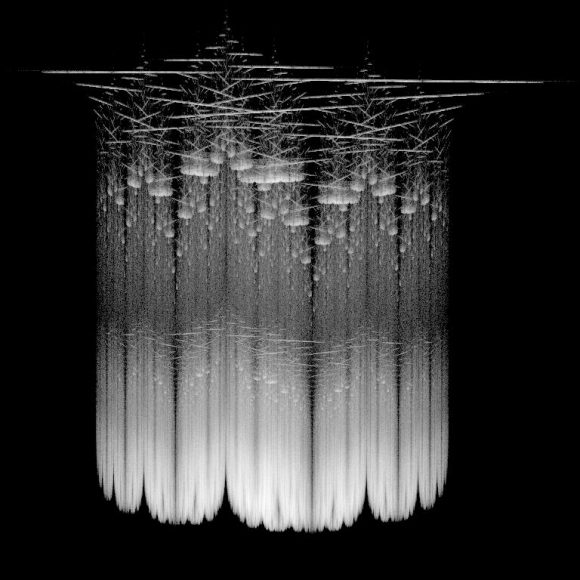 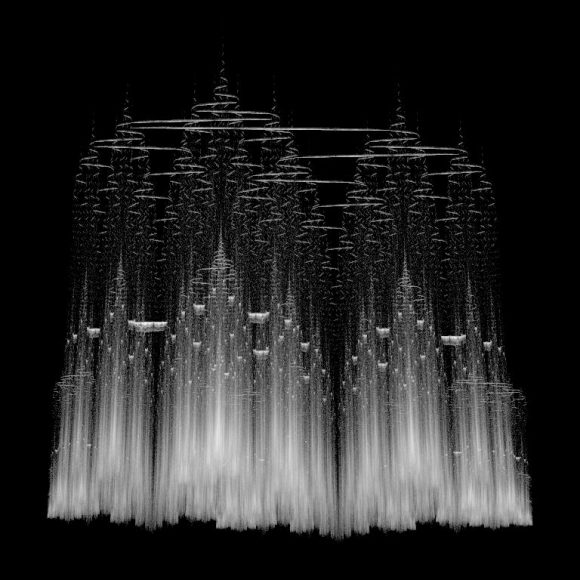 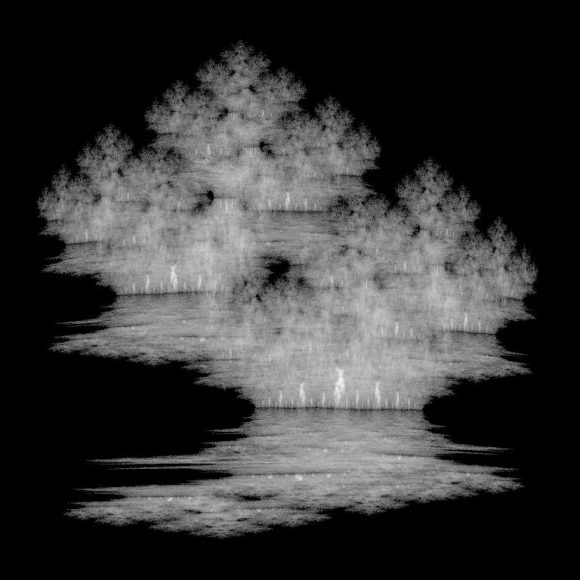 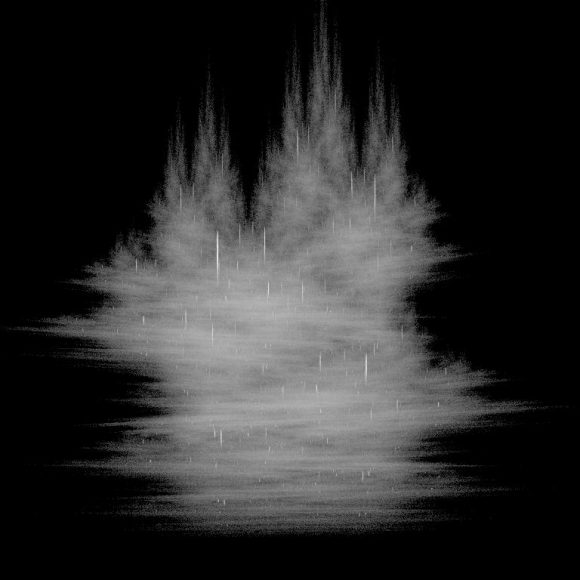 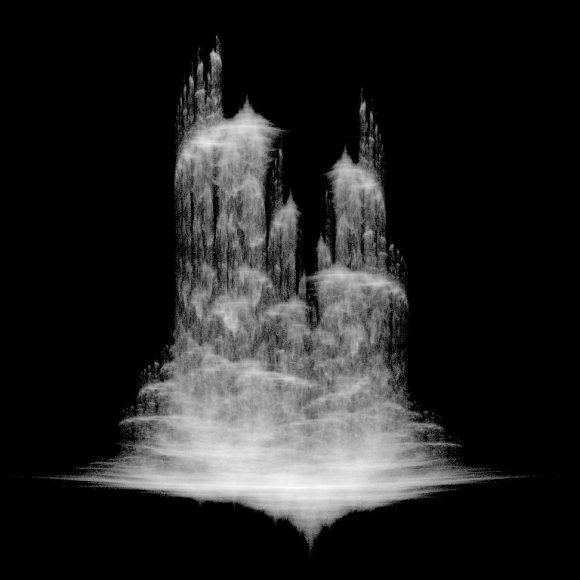 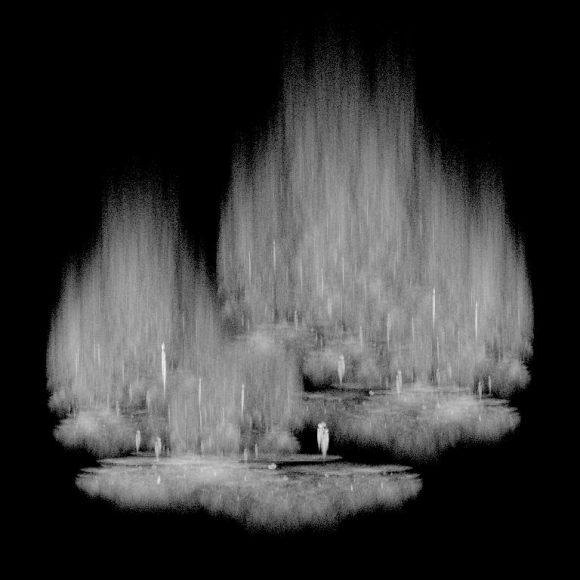 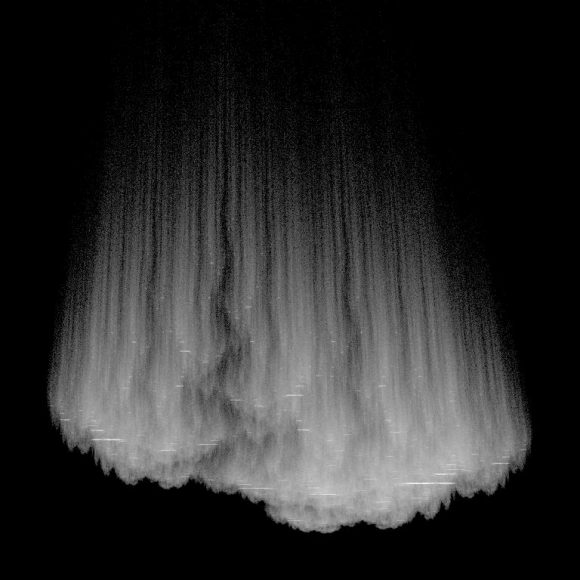 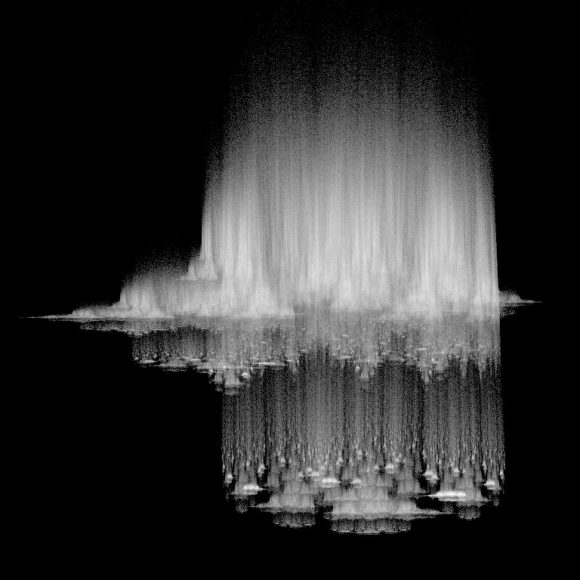 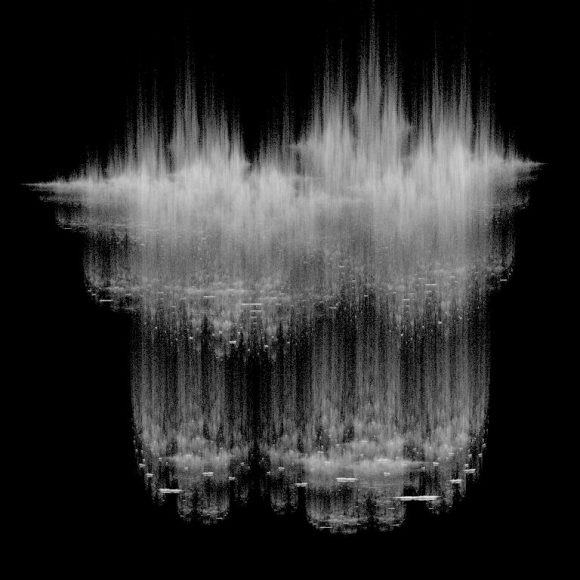 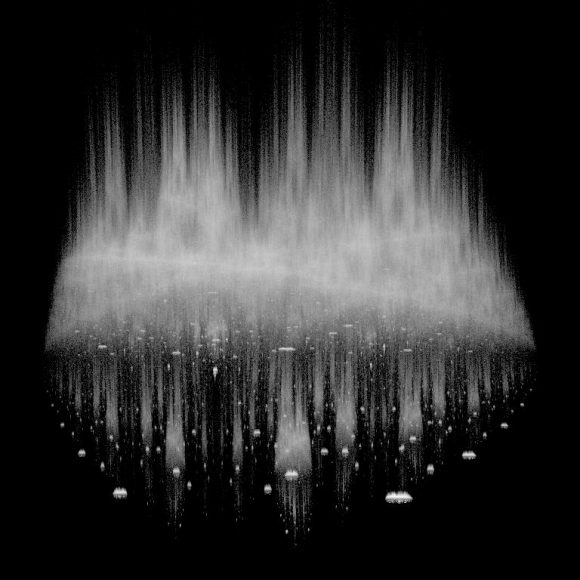 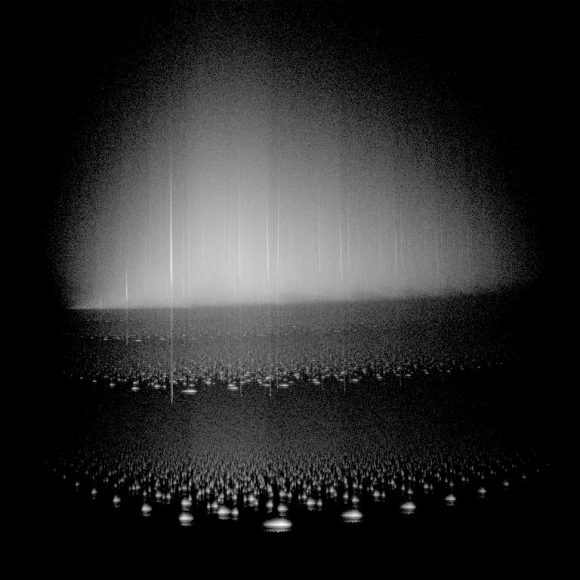 More fractal than the coastline of Britain or a Sierpinski corn-flake!

Look closely at each image and you will see that every sub-unit is actually a copy of each large scale image.  Sometimes the smaller particles are flipped or rotated, but they are all self-similar on every scale.  I never noticed it at first until I stumbled across some really obvious examples.  The image just above is a good depiction of self-similarity.  Note the shape of the cloud in the background of the main image and then note how each of the small floating “puffs” are identical but scaled down to the point that they’ve become mini-thumbnails.  Some are flipped left to right, but each small one contains all the elements of the large one that forms the entire picture.  Recursive as well as self-similar, these images are about as fractal as fractal art can get.  And 100% mechanically made!  No “artist” required.  The program will entertain you. 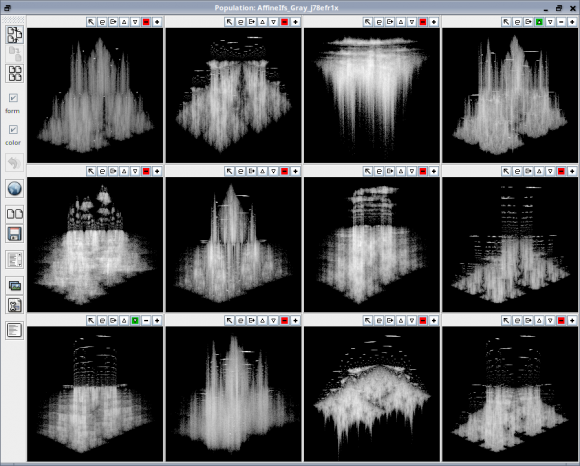 Screenshot of all there is to Kandid: a bunch of breeding cells. Note the top right and bottom left cells marked with green triangles are the parents hand chosen by the user for breeding and the rest are the children.  You click the top-left button on the toolbar and the children cells change.  Change your parental pair selection or click again.  That’s all there is to it.

The only parameter settings that there are. I don’t know what they mean, but adjusting them does change the results somewhat.  I think the limit for mutation is 1.00.  I tried 9.99 but it stopped me. 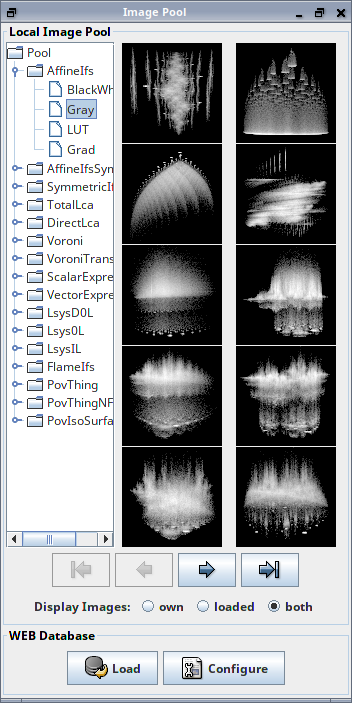 Kandid conveniently makes available every image you’ve saved for re-breeding later. It displays the corresponding image file for each  accompanying chromosome file containing the genetic parameters that define the image’s graphical characteristics.  You don’t actually breed the images, you breed the parameters.  This is generally how most genetic programming works, I would guess. 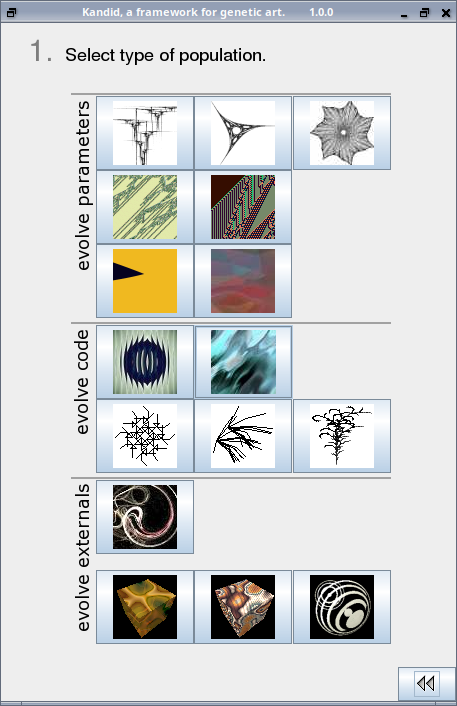 Main opening screen for Kandid. The options are IFS (top row) Cellular Automata (next row down), then Voronoi Diagrams and then a bunch that I’ve never found very useful like L-systems and something that allows for POV ray export and things like that.  Ironically, there’s a Flame Fractal function but it’s very primitive although maybe it wasn’t back in 2002 (second row from bottom).

“Why is there so much more interest in a program like Chaotica and JWildfire among fractal artists than there is in one like Kandid?”

I think what makes the average fractal artist tick is an interest in fractal software development.  They like artwork that epitomizes and demonstrates cutting edge rendering.  This is not really an art thing, it’s more of a medium thing.  Imagine a photography category that focuses and revolves around the latest equipment and specialized techniques.  Their photo galleries would be full of very similar subject matter that highlighted differences in the equipment and techniques used.  It would be labeled a photography tweaking group.  Would they have eccentric subject matter and themes? or much “retro” black and white photography?  No, they would use standardized themes because that would make for easier comparison with current artwork and techniques.

In the fractal art world over the last two decades we’ve improved the rendering but we haven’t improved the subject matter and there’s no point in improving the rendering unless it’s got a subject worth rendering.  The 3D fractal innovation of the last few years was the sole exception.  The 3D fractal revolution brought both an improvement in rendering as well as an improvement in subject matter.  It was “3D imagery” (voxels) but it was also interesting 3D imagery.  All of a sudden you had a quantum leap in creativity in the themes of fractal places and fractal landscapes.  It was much more than a tweak.  Artists I’d never been very interested in before suddenly started adding exciting stuff to their online galleries.  Something happened to them? or something happened to their software?