Over the years I’ve come to see this as the perennial problem in fractal art. Naturally there are many other perspectives regarding the “art-worthiness” of fractals, among which the most common seems to be that they’re essentially no different than any other medium that artists work with. But this doesn’t explain why the enormous creative powers of fractal formulas hasn’t resulted in enormous amounts of creative art. Fractals ought to be artistic powerhouses but instead they’re merely fractal powerhouses. 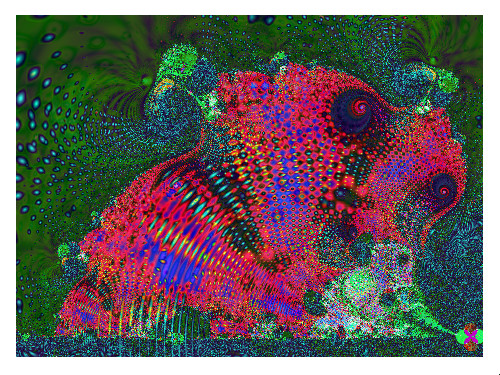 There’s a killer on the road…

There seems to be something deceptively enticing about fractals with respect to their artistic potential: they look like they can do almost anything and yet after a couple of decades what has resulted is almost nothing except for works of mere technological interest. There are no great works of fractal art, only a great number of little fascinating things.

The fractal medium is deceptive. Part of the deception of fractals is that the creative thrill of using a fractal program and zooming through the incredible fractal vistas that it magically generates is lost when we stop the “fractal experience” and try to capture it as a still image. It’s like looking at vacation photos or, for your audience, looking at someone else’s vacation photos; they’re just not anything like the real thing, the vacation is missing from the vacation photos. But then a picture taken on a roller coaster isn’t anything like riding that roller coaster and fractals are a graphical roller coaster. To use yet another analogy: fractal art pulled out of its interactive fractal environment is like a fish out of water. We don’t understand the art form and so we don’t understand why it dies when we move it to the art gallery. 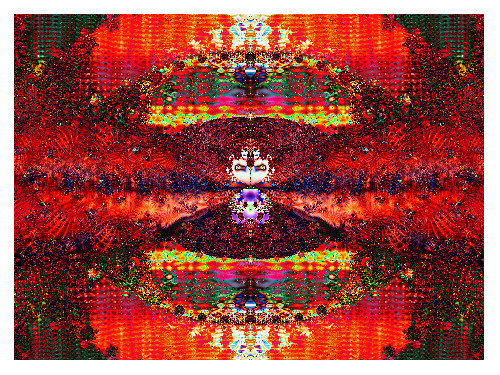 The other deceptive thing about fractals I’ve come to recognize is that they speak a completely different visual language than most everything else in the art world. Fractals are not just abstract, they’re an almost empty kind of abstraction; full of fractal style and “infinite detail” but lacking anything that the average person can connect with, relate to.  Monet’s water lillies are full of feeling although being, just like most examples of impressionism are, semi-abstracted. Fractal programs can create all sorts of freaky things but they just can’t do what simple water lillies do. It sounds ridiculous to say that but that’s what is deceptive about fractals: they contain all the ingredients for an explosion of art but seem to be missing that ridiculous little spark.

And that would be an artist, right?  What about the artist? How about adding the creative talents and direction of a feeling, human mind to the mix? A fractal program is just a tool. An artist will use that software tool to make art just like a photographer uses a camera to make their art.

Yeah, how come that doesn’t work either?

One of the biggest surprises of the Ultrafractal phenomenon where the artist was placed right in the middle of the rendering process where they could layer, mask, import, add, substract, multiply, etc… with full artistic control, was that it didn’t make for fractal art that was any better than the old single layer fractal programs. It just allowed everyone to boast about how hard they’d worked to make it. In fact, I came to the conclusion that the more an “artist” was allowed to get their hands on the imagery and alter the simple processing of a fractal program, the more likely they were to degrade the image rather than improve it. Becoming an “Ultrafractalist” allowed everyone to say they were artists and not simple button pushers but the lack of good artwork just emphasized how incredibly defeating the medium was because those “artists” were no better than button pushers when it came to making fractal art. Just look at all the award winning stuff the Benoit Mandelbrot Fractal Art Contests exhibited: who remembers any of them now that the social effervescence that attracted their audience is gone? Fractals programs were more interesting when they were soulless mechanical things than when they received a human heart from their well intentioned Wizard of Oz artist who was now directing them by hand: manual and mechanical methods don’t mix. 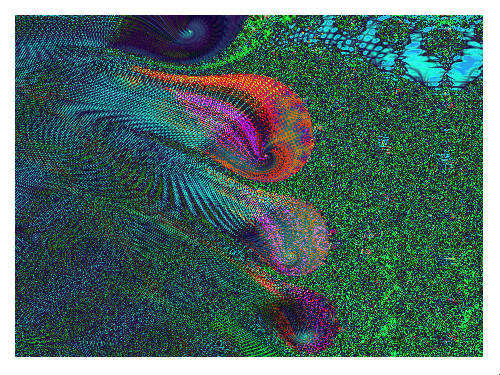 There are only two strategies for making art with fractals. What I mean is there are only two areas of fractal graphics that overlap with areas in the world of art. Maybe there are more, but I’ve noticed only two after my brief fifteen years with the medium. There are only two artistic genres that fractals have any natural talent to function in and that’s Abstract Expressionism and Landscape. Outside of those two themes fractal programs are just an amusement park to stroll around in.

And I’ll tell you, I love to go on those fractal roller coasters more than anyone. I just don’t expect any art to come from them anymore, just vacation photos: warm memories of the past that no one understands but me.

Stay tuned.  Part II won’t be quite as grumpy.