I read an interesting article by Rhiannon Cosslett in the The Guardian entitled, Art is all about nuance. Let’s not lose it in the alarmist censorship debate (Feb 8, 2018).  In attempting to explain the real source of the controversy behind the removal of a Victorian era painting from display in the Manchester Art Gallery, she appeals to a premise about art that I think not only succeeds in resolving that particular controversy but also resolving just about every other controversy there has ever been about the nature of art.  And furthermore, what she says about art is even more relevant in the context of fractal and algorithmic art because of its abstract character.

The article is quite short and very well written, so I won’t bother summarizing it here.  However, for discussion purposes, here are the main points:

Nuance is the key to understanding art

On the surface the article is just saying:  It’s all about nuance and there’s lots of those so don’t get hung up on any one interpretation of anything.  But underneath, there is the implication that art is not something that can be objectively studied, discussed or even evaluated because people’s impressions of it are not comparable; being formed primarily not by what they see, but how they see it.

But the conceptual implications of nuance go even further than that.  They suggest that any image of anything at all is really just a collection of visual elements whose order, significance and meaning are products of the eccentricities of the viewer’s mind rather than fixed properties of the image or the intentions of the artist.

Art is undefinable and not only that, it’s uncontrollable and unpredictable.  Small changes in the mind of the viewer will have enormous consequences for the interpretation of art.  Some little thing or aspect of an image can have an effect on your overall impression similar to how, in Chaos Theory, a butterfly beating its wings in one place can cause a hurricane somewhere else.  Those little things or aspects are called “nuance”.  Whether nuance springs from the mind of the viewer, or the art, makes no difference because ultimately the substance, medium and domain of all art is the human mind and thus the only thing you can hope to be objective about in art is your own opinions.

“Nuance is…the site in which most art resides” writes Cosslett.  The easiest way to show this is by reexamining the controversy that Cosslett’s article deals with: sexual themes in art. These themes make the role of nuance appear not so nuanced.

Cosslett’s impressions on this painting by Degas is a good example of art being all about nuance. 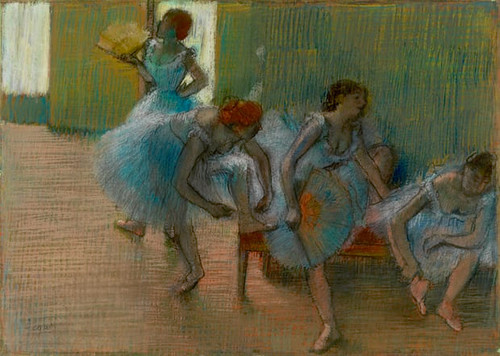 “Filthy old pervert Degas and his pre-teen ballerinas” is how Cosslett captions this image.  Why?  Why would Cosslett say that?  I asked that question too until I sensed the nuance that she was alluding to.  Do you see it, too?

You probably don’t see anything “wrong” with Degas’ painting because you haven’t paid much attention to the ages of the “women” in the painting.  They’re all young girls and here we have a voyeuristic “look down the top” view of three of them tightening their point shoes.

But have you changed your view of the painting now?  Or has nothing changed except that now you want to vigorously defend your own interpretation against her “revisionist” one?  If you don’t see this painting as the artistic expression of  a “filthy old pervert” that’s okay.  Your perspective may not take seriously the nuances of “filth” or “pre-teen ballerinas” or you may not even see any of that at all, but yours is still a reasonable interpretation and the most common one, too, I’d say.  But now, I think you can also see how your reasonable interpretation isn’t the only one.  That is really all I think Cosslett is trying to say on this matter of censorship and alarmist reactions to art: there’s always more than one interpretation because… art is all about nuance.

There are undoubtedly many possible nuances in the painting depending on how you see these sorts of scenes and subjects, and your reaction to them (or lack of reaction) is really just a matter of who you are and how you see things, your taste in art, etc…  Can you change who you are and how you see things? There’s more to Degas than his questionable interest in the scene depicted above, and who’s to say one interpretation is right and the other wrong?  If art is all about nuance, then art is not an objective thing.  Can it ever be?

Art is all about nuance means artistic interpretation revolves around suggestion and perceived implication: fuzzy stuff. 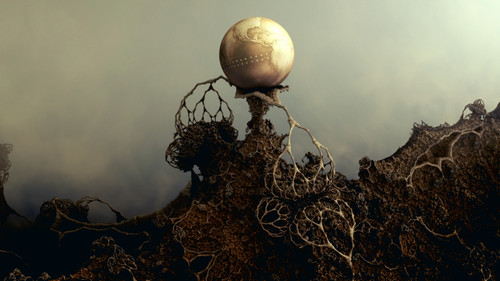 The Prize by Leonard (Fractalforums.com) 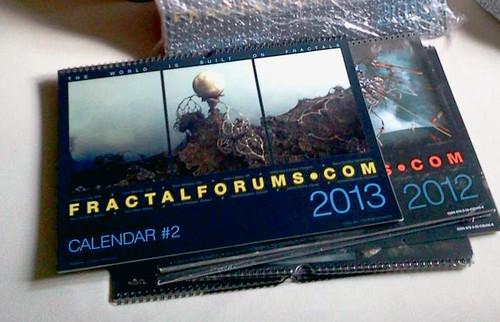 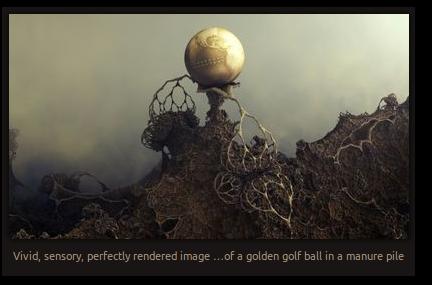 So what gave me such a different impression of this cover image than that of the awesome, fractal lovin’ folks over at Fractalforums?  Well, who’s to say where our impressions of art come from, or for that matter, our gut feelings about anything?  However, the dark, crumbling heap with straw-like things in it and the background of finely rendered, yellowy-brown volumetric fog reminded me -quite vividly- of a horse stable manure pile on an overcast afternoon in late winter.  Is that crazy?  And even if it was, can I help it?  I visited one every day (with a wheelbarrow) for a few years when I was a teenager.

The folks at Fractalforums generally loved the image and I believe it was mostly because the nuances I described didn’t seem to be relevant to them even after I mentioned them.  The operator of the site even started a thread to post a link to my review of the calendar.  He obviously didn’t see the review in the negative light that the other people responding to the thread did.  Another perspective on a perspective.

I consider my impression of the image to be a minority one, but I’m sure it caused others to reconsider their own, even if it didn’t change those opinions much.  The main point is that, as you can see, there is no correct interpretation of that cover image.  It’s as nuanced as Degas’ “pre-teen ballerinas”.

I wanted to post another fractal image I saw years ago (somewhere) of a giant, shiny 3D fractal shape situated in a river with water flowing past it.  The water was of a thick yellow consistency and the shine on the 3D fractal shape resembled porcelain…  It was disgusting, but none of the comments on the image posting page suggested anything like the impression I had.

Art has a mind of its own: the viewer’s mind.

Part two… The Nuances of Nuance.  For the true enthusiast.