The work of some surrealist artists back in the early 20th century involved the use of creative methods that are almost analogous to many of our modern computerized algorithms and effects.  For people like myself that are currently exploring the creative potential of photoshop filters and other graphically creative computer things, the smoke drawings, photo choppings and experimental painting techniques of the surrealists are an instructive as well as encouraging gift from the past.  They are fellow “syntheticists” because even though they worked in a very different, non-digital medium, they merely worked with different machinery while pursuing the same graphical philosopher’s stone as the digital syntheticist does: creativity that isn’t trapped in the wheel-ruts of the human mind.

Yes, human thought and expression can be plagued with “wheel-ruts”.  Nothing shows this better than synthetic creativity.

Surrealist art was obsessed with the human mind and in particular the so-called subconscious mind that was the focus of psychological investigators like Sigmund Freud and Carl Jung.  While some surrealists explored their minds and created works based on that sort of self-directed, introspective method, others took a contrasting path and tried to provoke their imaginations and those of their audience’s from the outside with automatically created graphical works (“automatism”).  (Check out Surrealist techniques on the Wikipedia.)

While psychiatry considers automatism reflexive and constricting, the Surrealists believed it was a higher form of behaviour. For them, automatism could express the creative force of what they believed was the unconscious in art. Automatism was the cornerstone of Surrealism. André Breton defined Surrealism in his Manifeste du surréalisme (1924) as ‘psychic automatism in its pure state’. This automatism was ‘dictated by thought, in the absence of any control exercised by reason, exempt from any aesthetic or moral concern’.

Surrealist art is a pretty broad subject and there’s a lot more to automatism than synthetic creativity so let’s just focus on what the Merriam Webster dictionary says about automatism:

This, from the Merriam Webster dictionary site is helpful too:

Method of painting or drawing in which conscious control over the movement of the hand is suppressed so that the subconscious mind may take over. For some Abstract Expressionists, such as Jackson Pollock, the automatic process encompassed the entire process of composition. The Surrealists, having once achieved an interesting image or form by automatic or chance means, exploited the technique with fully conscious purpose. See also Abstract Expressionism, action painting, Surrealism.

As you can see, the concept of automatism diverges into a number of applications depending on how much the interfering influence of human artistry is excluded; but surely the creation of imagery through solely mechanical means is the purest application as such a mindless process excludes any sort of intentionality.  The art (if any) is accidental.

If you think that sounds like a recipe for junk then you ought to remind yourself that much of what is called fractal art is made this way.  Many of the most confusing masses of graphical imagery found in the great (infamous?) works of  Abstract Expressionism and Action Painting involved much more human artistry and involvement that the most heavily layered fractal artworks.  We can all laugh at Jackson Pollock’s drip paintings but it’s the winners of the Benoit Mandelbrot Fractal Art Contests that are trying to get public recognition and acceptance in the art world, not Jackson Pollock, whose “junk” is now icons of 20th century art.

But getting back to the freaky surrealist art techniques…

I spoke about Decalcomania in the last part, Part 4; it’s not really algorithmic like fractals are, but it is mechanical.  One doesn’t draw with Decalcomania, they squish paint onto a canvas, or board with a glass plate and hope it provokes (after numerous attempts) something magnificent and deeply psychological.  Probing the mind and exploring psychological themes was a big part of surrealism and that’s where the experimental imagery came in:  Art as Rorschach test.

Here’s an article on surrealist art techiques.  It seems to have formed the basis for the Wikipedia page about the same topic.  I wonder which came first?

They all seem to be French words.  Here’s a quote:

Another surrealist technique was known as fumage (smoking). Pioneered by Wolfgang Paalen (1907-1959) during the late 1930s, it involved placing a candle under a sheet of paper to form patterns of soot. Moving the candle varied the patterns. 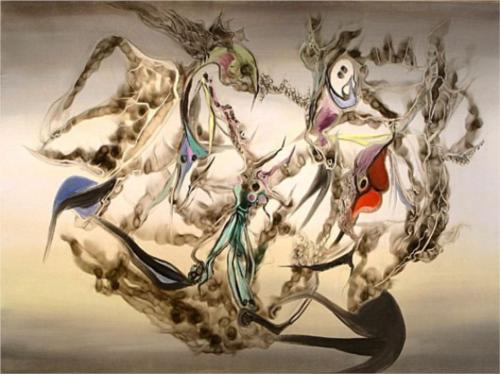 Here’s an image made in the program, Fyre (no pun intended) that utilizes the Peter de Jong map (algorithm).  Not exactly a great work of art like Paalen’s but I think it shows some similarity in the type of imagery formed by a smoky algorithm instead of a smoky candle. 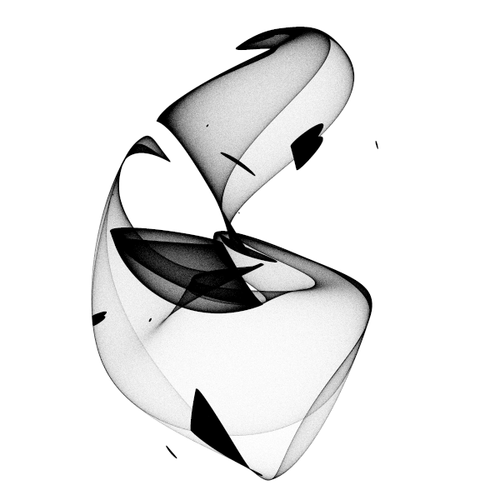 An image made with Fyre

Of course the best modern computerized analogue to the surrealist’s Fumage technique would be the gas fractals made with Apophysis.

Cubomania is a method of making collages in which a picture or image is cut into squares and the squares are then reassembled without regard for the image. The technique was first used by the Romanian surrealist Gherasim Luca. 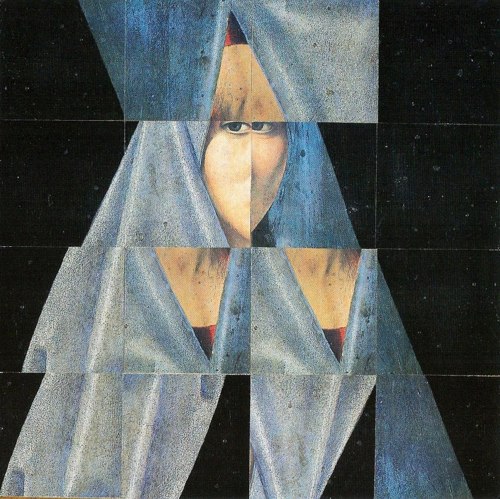 Here’s the Mona Lisa run through the photoshop filter, Flip Chop, made by Mario Klingemann: 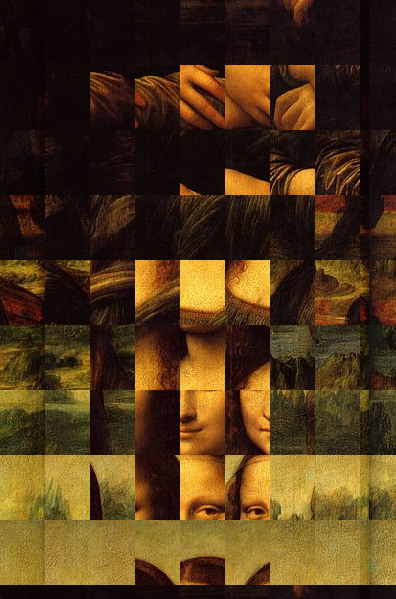 The idea the surrealists had with chopping up photographs was to create the suggestion of something else, something new.  The result was almost always an image that “worked” differently that the original.  Naturally it was fragmented but there was also a creative and often psychologically stimulating effect from the new mental as well as physical arrangement.  Flip chop does this with almost no influence from the “artist”.  I’m sure there are other filters that will allow for more variation, like a random seed or something like that.

grat·tage (gr?-tazh’) n. A surrealist technique in painting in which (usually dry) paint is scraped off the canvas. It was employed by Max Ernst and Joan Miró. [< Fr. “scraping”] 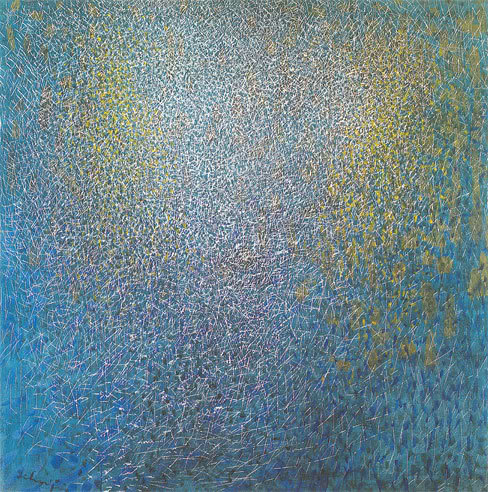 Yes, digital artists weren’t the first ones to go texture and gradient crazy.  Do we need to see a digital example of this?  Here’s something I made with a block wave filter that has the same effect, although not as elegant as Deluigi’s. 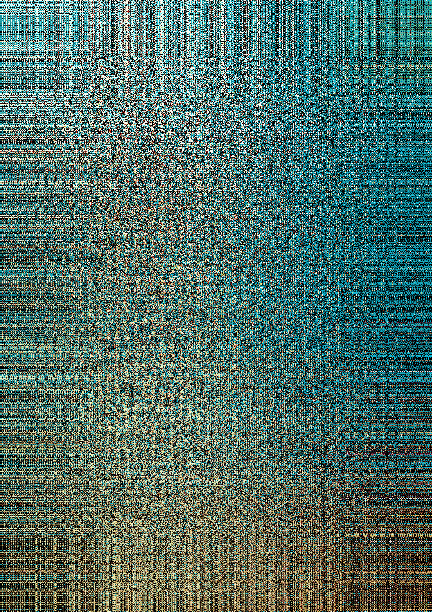 Click on Deluigi’s image to view several more.  It’s a fascinating type of imagery and one that easily makes the move into the digital realm of synthetic imagery.

Now scraping paint off a canvas isn’t exactly a hands-off technique, but other examples, especially by Max Ernst, also involve placing the soft canvas over a rough surface or item and yielding some of the shape or texture of the object underneath in the scraped canvas result.  Ernst also used the technique to inspire himself and as the basis for other hand-painted final works.  These synthetic methods of the surrealists, owing to their non-digital mediums, were not as mechanized and automated as today’s computerized methods are.

The hallmark of synthetic art is the lack of intentionality.  It’s lacking because the processes are disconnected from the artist’s conscious control.  The artist works by remote control and through mechanical means.  It makes the artist more productive as well as, perhaps, less of an artist in some people’s eyes.  The artwork is what’s important, not how much we can boast about it.  Surrealists pursued this unintentionality as much as their non-computerized tools would allow them precisely because they wanted imagery that was not an expression of an artist’s conscious (scheming, defensive, lying…) mind.

What’s important to note is that they pursued such methods for their artistic value despite the fact that at first glance such methods seem to be the antithesis of art.  The surrealists showed there’s artistic potential in the graphical synthesis of things like smoke, chopped up images, and scratched up canvases.  Today’s photoshop filters and the persistent experimentation with cheap graphical effects continue the exploration of that vast, rut-less wilderness .