Here’s a bunch of images that caught my eye while out prospecting with my virtual mule.  Let’s take a look while I try to psychoanalyze myself and add another chapter in the book, “Art as Rorschach Test”. 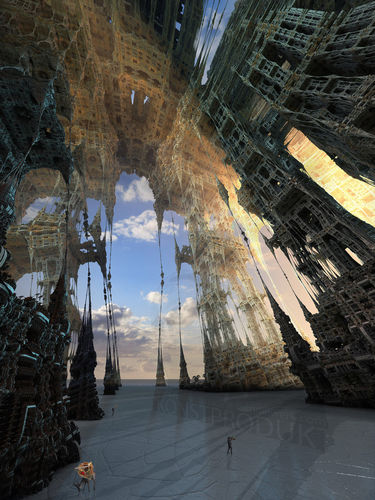 Stratographic detail/ Prince of Persia Sands of Time like awe-inspiring temple magnificence/ and another thing… it seems to be walking!  Can you imagine an elephant as a temple –walking?  Also, you could say it was one of those Star Wars big walking machines on Hoth.

I’d been waiting a while for Kraftwerk/Mandelwerk/Johan Andersson to add  a new creation to his collection of art-work-I-like and now it’s here.  Ironically, I find the little figures don’t add as much to the effect of the image as those sorts of additions usually do in 3D fractal art.  The sky does, and so does the shiny floor and shadows; but the impression of enormousness –and especially that strange, walking feeling– all come from the 3D fractal imagery.  I know it’s not because of sunstroke because I always wear a hat. 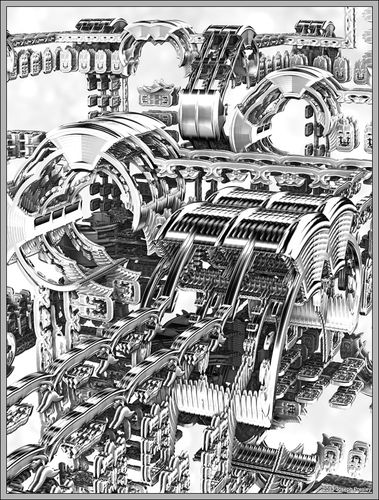 I’ve never been much of a fan of Joseph Presley’s art but lately he’s been moving in a new direction and it’s quite refreshing.  Black and white is a rarely used palette in fractal art but clearly Joe saw the artistic potential in it for this image and he did the right thing by abandoning colour altogether (unless you consider BW to be a colour all its own).  The steeliness is accentuated; the mechanical parts are emphasized and yet the image rather than becoming flat has clear depth to it.

Here’s one that shows Joe’s good eye for fractal forms and the ability to orchestrate it with real world imagery.  My goodness, two images by Joseph Presley; I’m becoming a real fan. 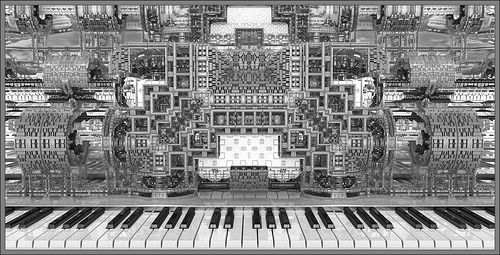 You really need to see the full-size version to appreciate the details.  I was just stunned when I saw this one on Fractalforums.com.  It’s genuinely fractal and yet blends seamlessly with the real world keyboard at the bottom.  I wonder if Joe made the keyboard in Ultra Fractal too?  I also like the use of symmetry (the left and right sides are identical), it gives the machine a man made look despite it’s genuine algorithmic pedigree.  I wonder if this was made in Xenodream?  Joe has a large collection of “Musical Art” of which this one, oddly enough is not part of.  Perhaps the arrival of the 3D fractal wave has energized Joe’s creativity.  He wouldn’t be the only one.

While we’re on the topic of artists I usually dislike, let’s take a look at this one: 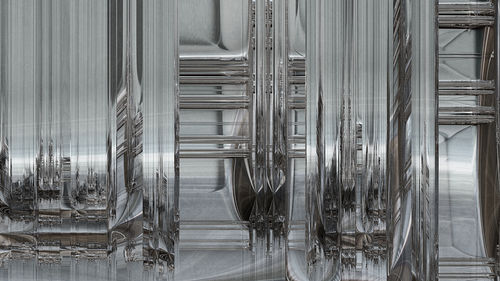 I’ve been noticing “Jimmie’s” work on Fractalforums.com for quite a while.  It’s usually the sort of highly polished ornate UF stuff that also turned me off Joseph Presley’s earlier works.  Then, all of a sudden, Jimmie posts this incredible, transcendental House of Doctor Zhivago vision.  Here is where mine and Jimmie’s tastes in fractal art meet.  I don’t expect it to happen again for quite some time, but who knows where anyone’s art is taking them?  Each fold in the curtain tells another fragment of the story of a majestic castle enthroned in perpetual winter.  A sort of Fall of the House of Usher meets Baba Yaga in the Gulag.  I don’t think Jimmie intended that, but that’s what I see.  Steelcurtains is a nice neutral, non-suggestive name, though.  My names are all crazy.

Well, I can see this post is taking on a life of it’s own and charting its own course.  Now here’s not one but two images by another artist I used to shrug off but now have come to appreciate. 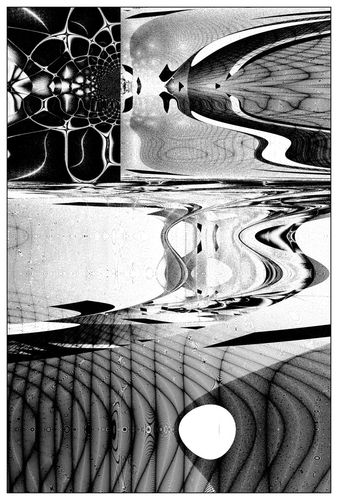 Guagapunyaimel creates a lot of these types of image which I would loosely describe as “window worlds”.  Although I don’t know what program this was made in, Guagapunyaimel is one of the few Chaotica devotees creating flame fractal artworks with that special program.  I’m sure there’s plenty of fractal folks out there who don’t care for:

1) Black and White, monochrome anything

2) Images without a nice, rational central focal point that can be talked about

…then I think you’re someone who doesn’t really like the fractalness of fractal art.  Ironically, this one’s title suggests a new definition of fractal art and I think it fits quite well.  What would Che Guevara do? 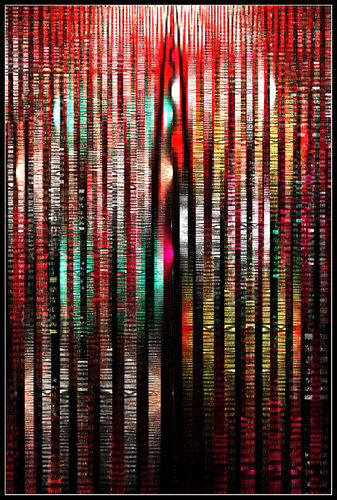 Check out the full-size version to see the richness that the fractal detail adds to this one.  This one is very fractal both in word and deed.  Unlike the previous one which has no central shape or focus, this one has a very clear design structure to it which the smaller elements both emphasize, alter and embellish.  This one has a Chaotica look to it, but there’s no hint on the deviantART page as to the program used and I’ve learned not to guess about such things.

While we’re on the topic of Chaotica, any of you Fractalforums.com readers will have noticed the recent thread about Fractal Architect vs. Chaotica.  Among other things… it rapidly boiled down to which program produces the better art.  Only a technically obsessed software developer would ask such a square-headed question, but it does raise an issue which is worth considering: What makes a fractal program a good fractal program?

Well, I would say the output (success) of any fractal art program depends as much on its userbase (or lack of) as it does on the program itself and whatever special features it may have.   Chaotica clearly has an enormous lead in this respect compared with Fractal Architect as its larger user base has taken this program and really transformed the world of “flame” fractals into something much more interesting and much less “flamey”.  Chaotica still has the capability of producing the usual assortment of glass bubbles, neon flowers and glowing water sprinkles that have come to characterize the world of flame fractals, but it also renders things which are dramatically different than theses common gas bubble things.

I definitely agree that a fractal program is best judged by what people make with it (because that’s what fractal programs are for) but unfortunately for the software developers that depends more on how the users use it than on how the developers have developed it.  In short, the question is never definitively answered because what a program is capable of –especially a fractal program– is never fully and completely demonstrated.  It’s a bit like asking, “What can be done with a paintbrush?”

To answer the question, “What can be done with Chaotica?” or rather what can we begin to do with Chaotica, let’s look at this freshly posted image from deviantART: 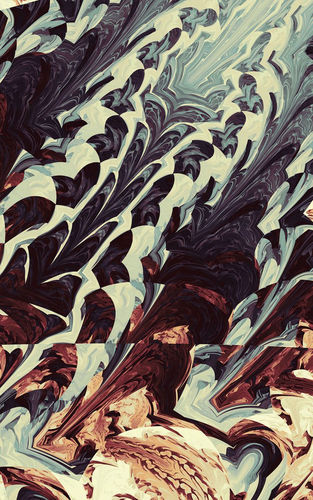 Tatasz is a new name to me, which probably shows how little I’ve bothered to follow the progress of Chaotica’s userbase and its “artbase”.  I  found it rather quickly by browsing the Chaotica Fractals group Featured gallery and that’s probably the best place to start if you want to see the “artbase”.  At least you can be sure what program has been used.

Winds by tatasz is an interesting image regardless of the context one views it in: Chaotica Fractals; Flame Fractals; Algorithmic Art; etc..  The full-size is much more impressive because you can see the exquisite “painterly” style to the image.  I think tatasz has been doing some real, cutting edge experimentation with this sort of Chaotica imagery.  I read that somewhere.  Back to the image…  This is the bottom of a frozen lake? or, snow covered spruce trees in the wind?  Here’s something interesting to compare it with as we take a giant leap from the digital to the old-fashioned paintbrush world: 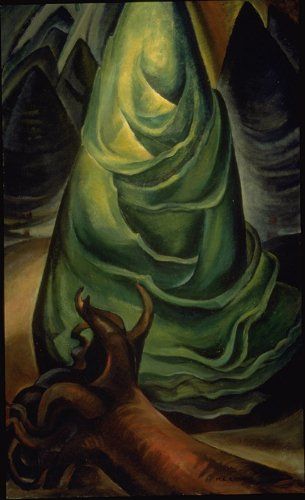 This one is a painting, of course, but I think you can see the potential Chaotica has in the hands of someone who has a feel for using algorithmic software (not all developers are as handy creating with their software as some of their users are).  The future of Fractal Architect, like all software art programs, is in the hands of its userbase.  Hopefully that will grow.

Fractal Architect is a Mac program and here’s something else of interest from the Apple world: 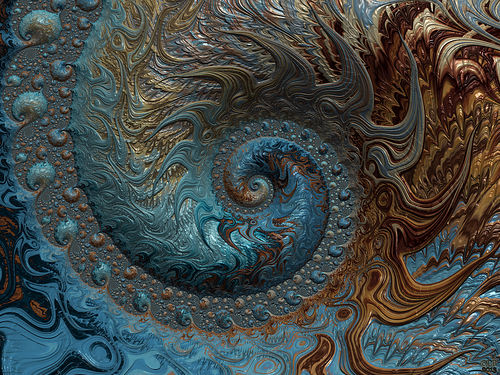 Made with the Frax app for iOS (iPhone, iPad…).  I’ve always considered the spiral to be not so much a fractal cliche as it is a sub-genre of fractal art.  Similar in this respect to what still life (paintings of fruit bowls) is to painting.  How cliche a spiral looks depends on what the fractalist does with it or to it.  Something one could say about the entire genre of fractal art.  There’s an interesting detail in the lower left corner: 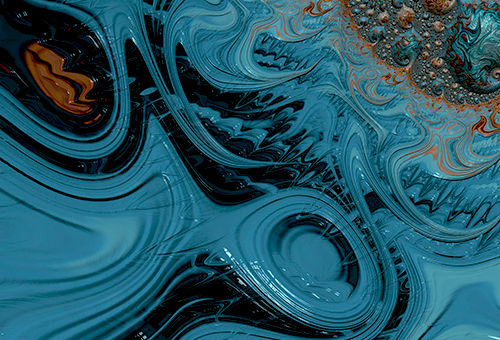 Not so blue (detail) by Aqua-Loop on deviantART

These are the dreamy details that capture the viewers mind.  The shine of varnished oil paint, the colloidal creaminess of marble paper, northern lights in a winter night sky, sheet music shooting out of the Sun.  You see?  If you’re going to turn your back on the fractal spiral you might as well turn your back on all of fractal art.  You don’t really like it.  That’s what the Rorschach shapes are saying.

One thought on “Fresh Fractal Finds”