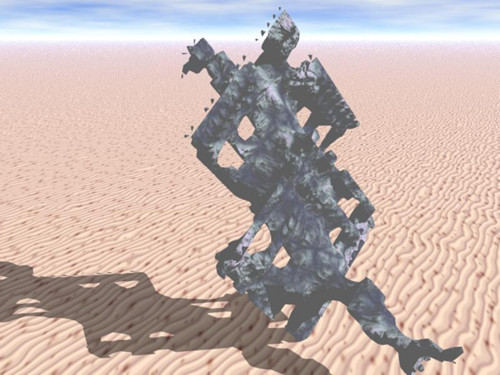 I should begin by mentioning I never actually met Paul –offline, that is. But I suspect that describes most of the people he knew, since he was so active in the online world. In fact, I was invited to his wake solely on the basis of being in his email contacts list. Paul led a virtual life and perhaps it’s us virtual folks who knew him best.

My first encounter with Paul was, I suspect, like that of most people:  as someone interested in fractals and surfing the net I discovered his Fractal Database.  That is where the memories start.

My first impression was that Paul was just eccentric.  Later on I thought he was hostile.  That was because of all the “personal” information he was posting in such an easily accessible way on the internet.  Back then, like a lot of people, I saw the internet as a mysterious and threatening place where special precautions had to be taken.

But I grew up and with that so did my impression of Paul’s fractal phone book as well as my impression of Paul:  he was obsessed, but only with fixing some of the structural problems with the online fractal world.  Fractal artists are a very touchy group and naturally they felt profoundly violated by having all their important names and email addresses hung out a window so any passerby could look at them.  The Lilliputians didn’t see the bigger thing that Paul was working to build, only their little unpermitted piece of it.  For those of you still suffering, don’t despair; it won’t be online much longer without Paul around to look after it.  Only Paul had the determination or boldness to attempt or maintain such a project.

Which brings me to a major reflection: over the years I noticed that Paul’s online adversaries tended to become mine also.  But then, like Paul to a lesser degree, I was obsessed with fixing the fractal world too.  But I’m over that now.

To me Paul was two things:  technically savvy in the technically oriented world of fractal art; and also, someone with a real understanding of art and some professional training to go with it.  As a result, Paul often did know what he was talking about when it came to fractal art’s dual aspects of technology and art.

But Paul’s main interest was always in meeting and introducing newcomers to the world of fractal art to the art form’s tools and technicians.  In addition to his fractal directory, he also ran one of the few active e-groups for fractal art.  I checked it out once and noted that is was almost entirely Paul giving links and recommendations to the new and the curious who happened to find it.  Paul was pretty much alone in this sort of thing but his independent attitude made that easy for him to do.  For many years Paul was a sort of unofficial ambassador for fractal art.

I think that’s what attracted Paul so much to Fractalforums.com later on: it really embodied the sort of open-air venue where the new and curious could find out about fractal art, ask questions and grow.  I think Paul was well known there for always making a point of answering first time posters and welcoming them.  Some people might say Paul was a hostile fanatic but interestingly he never seemed to have any real problems with the folks on Fractalforums.  And like I said about me and Paul having similar adversaries, we both seem to have been big fans of Fractalforums.  I think we both valued the non-partisan mood that generally prevails there.

So what about Paul’s art?  Was Paul a fractal artist?  Was he any good?

Well, Paul has a lot of stuff online that I just don’t understand.  But I was never part of the Fractint phase of fractal art.  However, his alter ego, “O” had some interesting works that made me think that me and Paul had some similar interests in fractal art, with respect to the highly synthetic, design-oriented type of imagery.  I wrote a post on them a while back when the true identity of “O” was just a rumour.  Not very many people in the fractal world have a lasting interest in fractal artwork that no longer represents the cutting edge in graphical rendering.  What made Paul different was that his interest in fractal art was rooted in artistic merit and not the trend of the day.  But I know that still doesn’t explain his own online gallery…

It may interest the readers of Orbit Trap to know that after the initial group phase of the blog failed, me and Terry considered asking Paul to join us as one of the three editor/contributors.  Maybe this really sums up just what Paul was to the fractal art world and why we considered him for such a challenging job;  Paul was: original; intelligent; vocal; literary; independent; vocal; independent again; and vocal, but worth reading; maybe too independent?;  no trouble at all speaking his mind; and perhaps unpredictable? but certainly worth reading…

Paul N. Lee was one of a kind and now he’s gone.  For those of you who never really liked him, you’re the ones who ought to be feeling a sense of loss.  You’ll never know the man we knew.