Still so sure it’s a better place to introduce people to fractal art than the (now old-fashioned) information highway –the internet?

The recently released photos of the Benoit Mandelbrot Fractal Art Contest Exhibition really underline what I’ve been saying for years:  no offline anything can compare with the internet for introducing people to fractal art and showcasing the best examples. 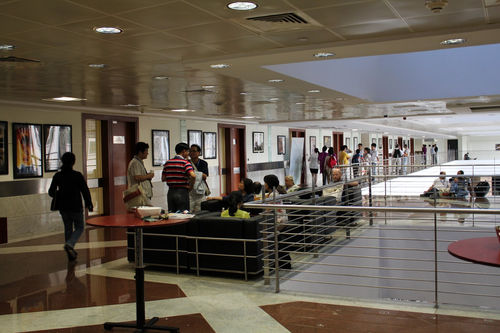 And the photos also emphasise something I’ve been saying: offline exhibitions are always tied to the personal agendas of the organizers and sponsors and the artwork (and the audience) suffers for it.  At least they suffer until they go home and start searching the information highway.

The Information Hallway, on the other hand, as expensive and complicated as it is to bring about , is so ineffective in every way.  It’s limited in what it shows: 25 works chosen not from all that the fractal art world has to offer but from what those who cared to enter the contest thought would impress the eclectic (dream team) of judges.  Right off the bat the exhibition is behind the eight ball because, by design, they must passively attend to only what the contestants give them.

And who’s walking down The Information Hallway anyhow?  Math professors and other greats of this highly esteemed and highly un-artistic group of professionals.  And as I mentioned once before, these people don’t have internet access or haven’t seen any fractal graphics before?  They’re hardly the type of people an advertising campaign would target to promote fractal art, or any other art genre.  Benoit Mandelbrot might have had a (passing) interest in the artistic application of fractal geometry, but that was years ago when fractals were fresh and revolutionary.  The world of mathematics professionals is not the place to sow the seeds of fractal art –the art world is!  Should that surprise you?

Jeremie Brunet (aka “bib”) recently had a (somewhat low-key) exhibition of his fractal artwork in a gallery in Paris and I think his approach was categorically better and about as effective as any offline fractal art event could be.

Compared the the great BMFAC with all it’s pomp, ceremony, famous selection committee and big sponsors, Jeremie Brunet’s low profile, one-man exhibition was a much smaller stone to drop in the ocean and yet it produced an much larger splash than the near-secret BMFAC did.   Why?  Because he presented artwork to an artwork loving crowd.  Mathematicians are boneheads when it comes to art.  That’s why they aren’t in an arsty profession, they’re mathematicians –academics and theorists.

A small television crew even came to interview Jeremie in the gallery with his work and he posted it on Fractalforums.com for all to see.  The BMFAC?  We had to beg the winners to show us some photos just to verify the exhibition actually happened (six months after).

Anyhow, the way other people are going to discover fractal art is probably the same way almost every fractal artist discovered it:  on the internet.  Go ahead and have offline exhibitions if the idea excites you.  But just remember that while you’re planning (and spending your money) for that offline event, more people are stumbling across fractal art for the first time on the internet than will ever attend your offline exhibition even if it was held for a year and advertised on billboards.

The Information Hallway, as we’ve seen from all the publicity surrounding the BMFAC 2010 exhibition (that’s sarcasm) is a good place to hide fractal art and an excellent choice of an audience if what you want is exuberant secrecy.  Meanwhile, the good old information highway keeps on rolling, 24/7, 365 days of the year.  Fractal artists ought to think about that venue.

3 thoughts on “presenting… The Information Hallway!”