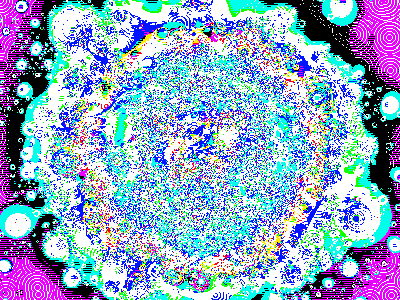 Before I start to comment on this year’s Benoit Mandelbrot Fractal Art Contest, I should tell you something: I don’t like contests. I think they trivialize art by turning it into a sports competition. The only redeeming features these self-inflicted events have is they create a compilation of artwork whose average level of quality is usually higher than normal, and they also allow those selections to gain more attention than they would otherwise have had, particulary for Fractal Art which is a genre that is primarily online and as a result, scattered far and wide all over the internet. Contests also cause people to reflect on art in a thoughtful, critical way, which usually leads to its development and refinement.

It’s this critical influence, intended or not, that contests have that prompts me to respond to them. I don’t think contests like this change the public’s image of Fractal Art as much as they change the image that Fractal artists have of it — particularly ones who take their direction from what they think is popular or presented as “the best” (like in a contest). Contests establish standards and make statements about art, even if the judges and organizers don’t want them to. Contests put artwork on trial and become a very strong, and very public type of artistic criticism. Contests promote values by selecting from the submissions artwork which best exemplifies the characteristics that the judges think are best. Contests are anything but neutral or non-judgemental and need to be carefully examined so that the values they suggest or imply can be given more deliberate and deeper consideration. Contests are criticism of the sharpest sort.

First off, it ought to be perfectly obvious to anyone who reads the rules that the Benoit Mandelbrot Fractal Art Contest is ultimately going to result in an exhibition made up of highly polished work made in Ultra Fractal. It’s there. It may not be intentional, but if you ask the question, “Why?” (and you should always ask that), the answer is plain: those are the attributes that they think makes good Fractal Art.

The required image sizes alone immediately narrow down the possibilities. Check out the names of the judges and see the sort of work they produce online and you’ll get an even clearer view of where this contest is leading. Check out last year’s results. That’s the sort of artwork this contest is all about and was directed, by design, to be. Unless the rules were made by accident, or a committee, which is often a special type of accident.

It all about Ultra Fractal. But that’s Okay, in my opinion. Sure, it might be a little dull, at least for people like me, but I don’t blame the Ultra Fractalists, or any other group, for cultivating and promoting their own style of Fractal Art. Perhaps Ultra Fractal really is a distinct, unique genre, or sub-genre, and should be presented separately. Of course it’s not exactly labelled, The Benoit Mandelbrot Ultra Fractal Art Contest. But that’s Okay too, it doesn’t have to be in the title. Many events have generic names and don’t necessarily represent everything in their field. The World Series, for example. 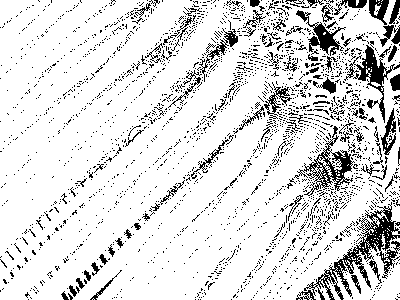 If you read carefully you’ll also realize that the “exhibit” is not the same as the contest results. The “exhibit” is made up of two groups of work: the contest winners and the judges own, self-selected work that is not judged, but is included with the contest winners for reasons I still can’t understand, although it may have been a half-baked idea — the first year. Why have a “contest” and then add unjudged work to it? Why is it considered a conflict of interest for the judges to submit their own work to the selection committee, but not when they select it themselves and have it automatically included in the exhibit? (Rules 2.1) Why not simply have the judges submit their work like everyone else, but abstain from voting on it? Or just not submit anything at all? Of course that last one is easy to answer: the exhibit won’t be the best of Ultra Fractal if you exclude the best Ultra Fractal artists. It’s also a “plum” given out to the judges to reward them for being involved. Apparently it happens in other contests, although the judges’ (unjudged) work is then presented separately to distinguish it from the contest.

Why do that? Why separate such work from the contest? As I mentioned, contests set standards and make statements about what is good (selected) and what isn’t (unselected). Conflicts of interest regarding selection undermines that standard and in the extreme case, invalidates it on the grounds that motives other than artistic quality influenced the selections. Pretty simple reasoning, don’t you think?

This is the achilles heel of the contest and it ought to be eliminated because it’s insulting to the judges as ultimately it makes them look like they’re cheating and using the exhibit to present their own artwork under the guise of having received critical acclaim (ie. selected by the judges -more than one) when in fact it only reflects their personal choice (one judge). They’re all respected fractal artists. They don’t need this private, back door to the exhibit. Their work is more than capable of standing on its own merits. Of course, you never can tell what the final result of any committee’s selection will be. There’s a gambling factor to contests that one always has to keep in mind, just like job interviews or academic marks or jury trials. 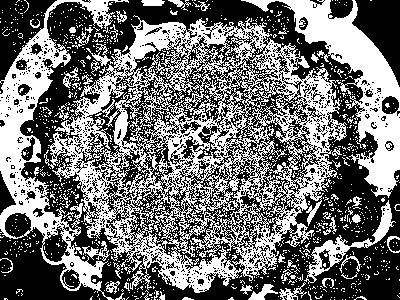 So what’s the bottom line in all this? It’s advertised as a Fractal Art contest but it’s really an Ultra Fractal Art contest. There’s no reason to apologize for this, as I’ve said. In my opinion people ought to read the rules closer, check out the judges and look at last year’s winners and they’ll realize that soon enough. Will the world come away thinking that Ultra Fractal is all there is to fractal art and the rest of us don’t count? Well, it’s an offline exhibition, and even though Madrid is a big city and everything (Barcelona might have been better), and all of this is part of an international gathering (of math people), I don’t think it even represents anything near the audience that visits my own personal website in the course of a single year, despite whatever long line-up there may have been. Oh, I’m forgetting, Dr. Mandelbrot. Sorry, but with all due respect to our dear mathematical genius and theoretical founder, he’s just a celebrity endorsement (but definitely the best, I might add). To put it simply: offline art doesn’t count for much anymore. Not even the Louvre can compete with the internet. Times have changed.

Anyhow, I’m sure we’ll be seeing a Benoit Mandelbrot Fractal Art Contest 2008. Most artists love contests and art galleries, even if they never win one or see their art displayed there. I believe there were many more submissions this time than last year, which is a clear sign of growing interest — and influence.

2 thoughts on “Contests and other Circuses”