I apologize in advance if this post seems like nothing more than a roundup of fractals recently posted to Fractalforums.com, that mega mecca of all things fractal, but that forum site just seems to have the right formula for their fractal flypaper that makes the job of roving scientists like myself so much easier.

Here’s a couple that give me the heebee-geebees… 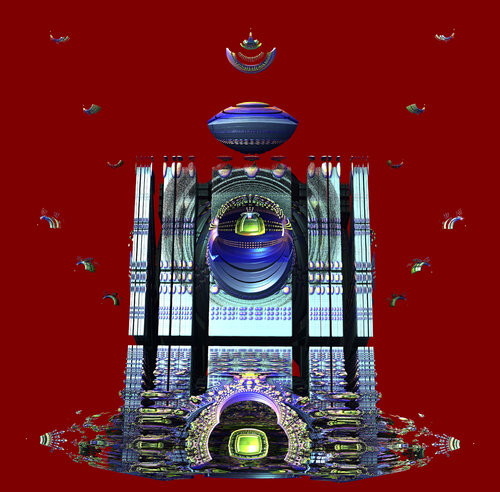 The synthetic power of fractals is really seen in this one.  It’s simple and iconic and yet filled with little details and subtleties.  It looks a lot better in full-size which you can see by clicking on the image.  These sort of images remind me of coats-of-arms, the heraldic imagery of medieval kingdoms.  They have the cryptic combination of lines, circular elements and colors that look very deliberate and symbolic and yet… drawn by a fractal formula and not a king’s legal representative. 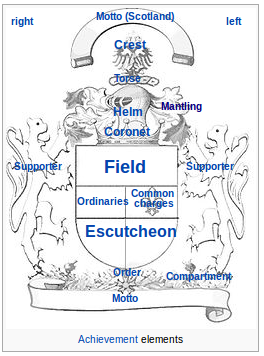 How to read the herald…

Fractals like Memnon suggest some kind of alien heraldry, or a world as strange and exotic as some kind of Tolkien trilogy set in the land of fractals. 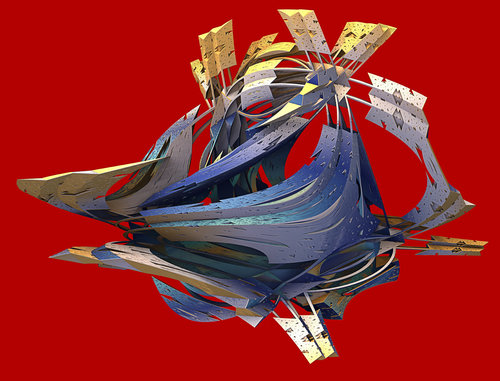 The details are quite interesting in this one too.  Hebegebe has a good eye for color and combined with the fine rendering of the 3D fractal program, makes for some nice details, like this in the bottom middle: 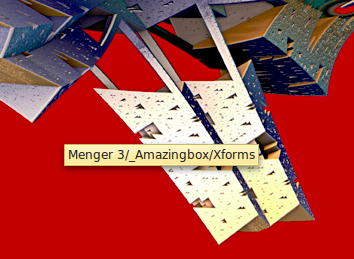 How convenient to have a tool-tip in one’s screenshot that displays the image notes…  Well, you can see the notes Hebegebe has included.  I need to do a little tweaking with my screenshot program.  I like the color for the tool-tip though; it goes with the orange-red background.  The digital medium is a living thing.

Anyhow, this FlyingShip is not your usual 3D fractal and in fact, resembles more one of those gymnastic, contortionist quaternions.  I saw something somewhere once that reminds me of this… 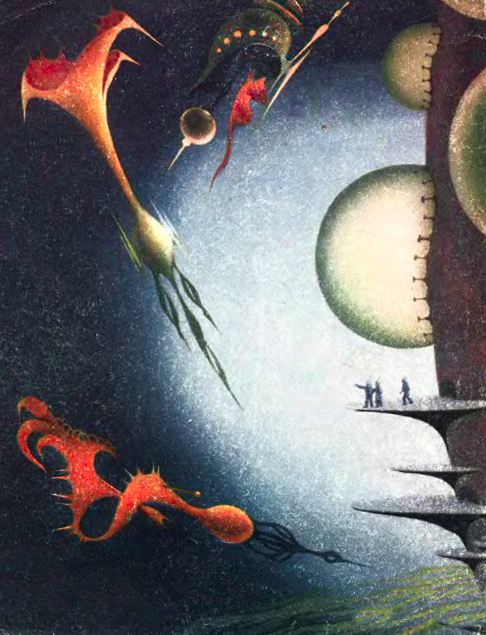 Isn’t the internet a much better place for just about everything?  Although I forgot where I got this from… it’s (as you can easily see) an old, 20s or 30s illustration for a sci-fi story.  Do you see a startling, “family resemblance” between it and Hebegebe’s FlyingShip?  If you do, then you’ve developed that artistic 3rd eye, like myself, that I suspect may also be associated with the early stages of either a real understanding of art or some sort of mental illness.  Fractal art is the crazy spaceships of today.  Note even the rich texturing and also, consistent, almost mechanically produced shading that appears all over the images.  This actually looks like it was computer drawn.

I’ve always felt that there’s a common link with computer art and art from the pre-digital age, but it requires a little bit of a leap to make the connection.  Mental connection.  Psychological. 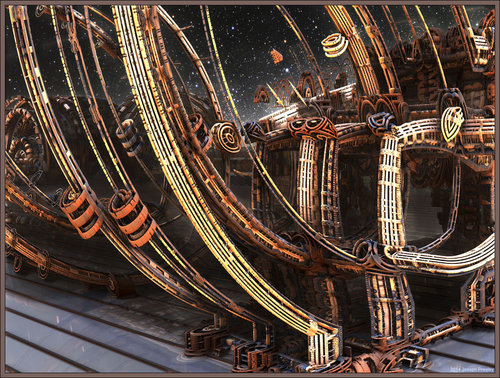 Have I become Joseph Presley’s biggest fan?  It gives me a chuckle how things can change in the fractal art world.  The medium is a slippery thing and one can go from making one kind of thing to something quite different.  The power of the medium allows artists to do things with their style that no other medium can.

Once again you need to look at the fullsize to share my excitement with this one.  JoeFRAQ is one of those rendering perfectionists and in the realm of 3D fractals the payoff for that kind of obsession is huge.  I always wonder what sort of rendering time it takes to make some of these images and what the specs on the computer hardware used is.

I should say something about the image:  Nice composition, but Joe’s always good at that; the colors are rich, complex and make the numerous details of the pipeworks much more exotic.  Up in the middle at the top there appears to be some lively bit floating by.  It almost seems to be moving.  And with the stars in the background, there’s a strong feeling to this scene.  Look how sophisticated the world of 3D fractals has become.  Wasn’t it just a year or two ago that the whole mandelbulb and mandelbox thing was invented? 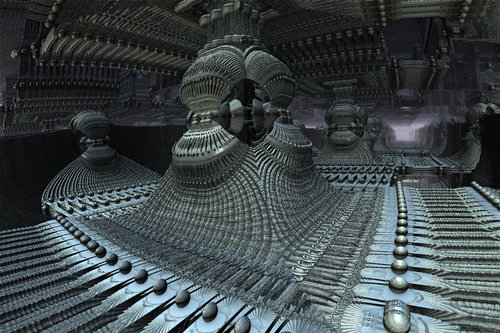 It’s a Symphony in Sand.  Unfortunately the 500px version above has smoothed out all the sand.  That’s usually a good thing in fractal art –anti-aliasing– but in this case it erases the Valley of the Kings majesty to abbaszargar’s work here.  In fact, this one’s so gritty that most people would consider it a rough draft, no pun intended, but I think this is a great example of how less can be more, that is, less rendering can produce something more artistic.  Here’s a lossless jpg crop of the original in one of my favorite “gritty” parts of the image: 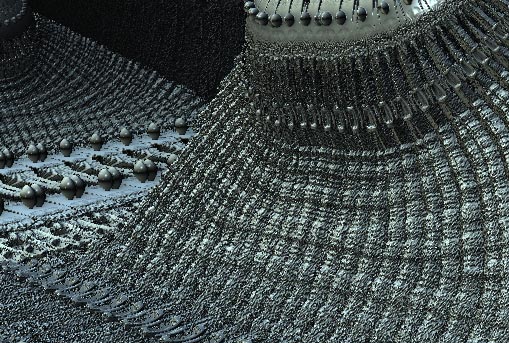 Here’s where we separate the art folks from the science fair enthusiasts.  The graininess of the imagery accentuates the eternal repeating –endlessness– of the image in a powerful way.  There are probably many images like this produced by other artists that being (too) well rendered don’t have this Valley of the Kings effect.  Maybe abbaszargar is not you average fractal artist?  Or did he intend this only to be a trial render?  Well, one way or another he made something remarkable and out of the ordinary.  The full-size really shows that much better; hint-hint.

I don’t watch a lot of fractal videos.  But I found this one posted to Fractalforums.com and something just drew me to click on it.  After watching the low-res version I soon jumped to the Vimeo page to see the hi-res one and it was certainly worth it.  Surprisingly, the author, Julius Horsthuis has managed to put the fractal imagery in a real narrative context of shipwrecked sailors wandering around in a state of semi-delirium.  It kept my attention as well as made me want to see it again in HD, and that’s a real accomplishment since I’m not the most friendly audience for fractal videos.

Navigation in Dreamtime from Julius Horsthuis on Vimeo.

I recently watched the entire Lord of the Rings movie trilogy as well as the two parts of The Hobbit trilogy that have been released, and after all that I had some profound thoughts on the merits and pitfalls of richly expensive CGI rendering.  I’m not a Tolkien fan, but the movies often kept my interest through the exotic scenery.  Interestingly, one of the most captivating scenes was in the Lord of the Rings series (or was it the Hobbit?) where the idiot with the english accent (bad casting) and his hobbit buddies end up walking into a mountain and are then trapped in a room and attacked by the sickly looking orcs.  Anyhow, the interior of the mountain where they come to a city, of sorts, with lots of pillars, was so impressive I wanted to leave the tour group and wander down every corridor just looking around.  Then I realized it was reminding me of the mandelbox and it’s carefully carved, details all over every surface.  In short, 3D fractals are actually better than many multi-million dollar CGI extravaganzas.  (Unless of course it’s a real movie with a story, actors, dialog and plot you want to see.)  But if you just want to run away from the tour group and look around then 3D fractal land is the place to go.  And cheaper too.