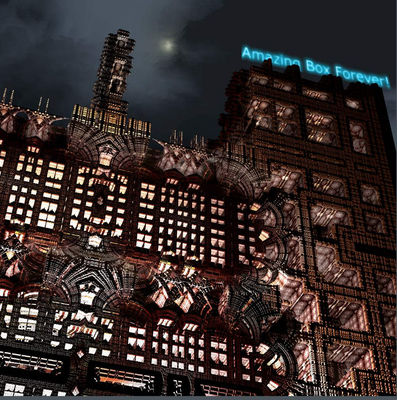 Just a neon sign, cloudy sky and moon, but what a transformation.  A number of 3d fractalists refer to having an “architectural style” and here you can really see what’s meant by that term and why it is such a natural one in the world of 3d fractals.  Nice and subtle addition to an otherwise average mandelbox.  ZZZ_spb really shines at this sort of thing. 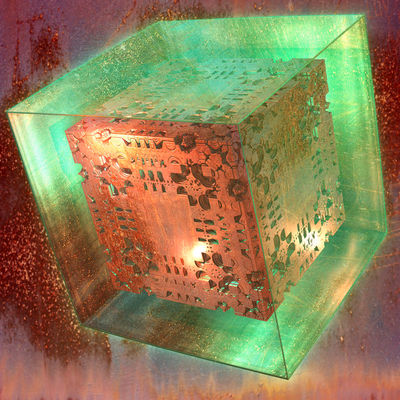 Another example of subtle but powerful.  This is not a terribly exciting mandelbox but the clear box Mark put around it and especially the way he’s colored and textured it’s surface has transformed the simple image into something fascinating.  I don’t think Mark was really trying to make something noteworthy here, just experiment with this inclusion feature of the program. But the final result is great. 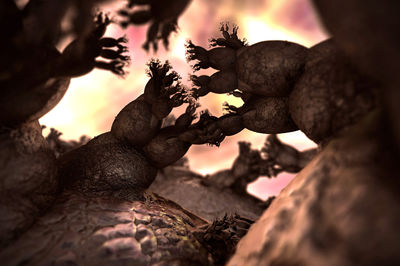 Made in Fragmentarium, a bold new program by Syntopia for making weird, terrifying things like this.  Although, like Mark’s image above, I believe this image is something of a technical experiment rather than an attempt to create art in the strict sense of the word (and what does that mean?), the result is something quite unique and almost humorous as well.  Humour in fractal art?

The power of fractal recursion to repeat things on smaller and smaller scales works quite an artistic effect here in the little shaking hands in the mid-foreground (bottom, center).  You might need to view the hi-res version to really appreciate it.  Next they’re all going to buy the world a Coke… 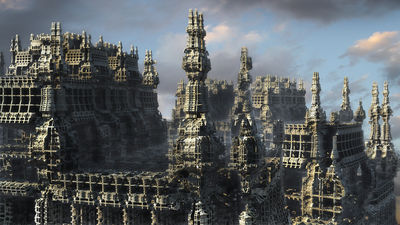 Is this what ZZZ_spb’s hotel looks like in the morning?  Well, it’s by lxh, another screen name I’ve been unable to decipher.  Maybe’s that the idea behind these screen names.  Someone ought to compile a list so we can at least decode them from time to time.

Lxh says this about the image on the Fractalforums.com gallery page:

Description: This might be what we see – a foreign city or complex – but in fact it’s the virtual manifestation of thoughts, ideas and efforts of the fractalforums scene and at least stage of my personal fractal journey.

Greetings to all you fractal travelers and explorers out there. May the shape be with you. And many thanks to all the gurus who made my journey possible: Daniel White, Jesse, Tglad, Kali, DarkBeam and all the other genius behind. You are my heroes …

DURING the whole of a dull, dark, and soundless day in the autumn of the year, when the clouds hung oppressively low in the heavens, I had been passing alone, on horseback, through a singularly dreary tract of country ; and at length found myself, as the shades of the evening drew on, within view of the melancholy House of Usher.

(excerpt, The Fall of the House of Usher, by Edgar Allan Poe)

On a dark desert highway, cool wind in my hair
Warm smell of colitas, rising up through the air
Up ahead in the distance, I saw a shimmering light
My head grew heavy and my sight grew dim
I had to stop for the night

~lyrics, Hotel California, by the Eagles 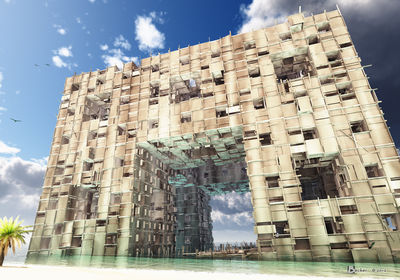 Menger on the beach by SaMMY

Made in Structure Synth by SaMMy.  He says this:

Description: I tried to build the mengerbox in a chaotic style – i hope you ENJOY

Nice, California look.  The sunlight reflects off the water and off the ceiling of the middle cavity; nice touch.  It resembles those 3d Bryce images that incorporate obviously artificial elements and yet have been seamlessly wrapped in the environment around them as if they grew out of it –right there.  In fact, this menger sponge structure looks like a ruined or dilapidated tropical building. 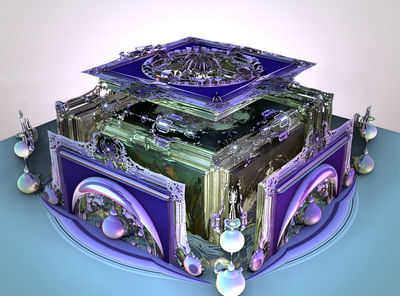 “Her mind is tiffany-twisted…”  I see this as an extremely unusual coffee table and of course, the sort of thing that would only reside in a rather wealthy, luxurious kind of place.  It’s an interesting “thing”.  Made of glass; too delicate to be used and thus… tiffany-twisted.

Her mind is Tiffany-twisted, she got the Mercedes bends
She got a lot of pretty, pretty boys she calls friends 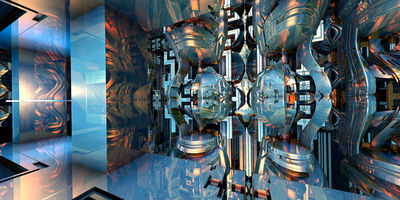 Mirrors on the ceiling,
The pink champagne on ice
And she said “We are all just prisoners here, of our own device”

You know, if they had 3d fractals back in 76 when Hotel California came out, then they would have used them for the album cover.  I’m assuming you know what an album cover is.

Mark’s image here uses reflection very well and creates images within the image –of itself!  “Prisoners… of our own device”  As always, if you want to get all the thrills this image has to offer, you need to click on it and see it full-size.  Or check out the mammoth version in Mark’s Deviant Art gallery. 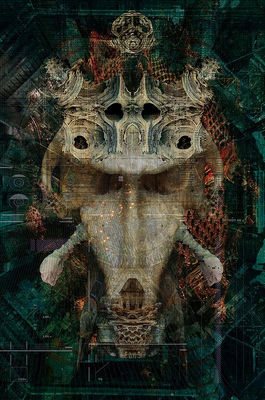 If you look closely you will see the rough, bud-like points of the mandelbulb.  However, this is not really a 3d image as you might have guessed and has been creatively layered and other things to produce this beastly looking creature.  (Pressed mandelbulb?)  As the title suggests, it’s a combination of various animal tissues –transplants.

Xenotransplantation (xenos- from the Greek meaning “foreign”), is the transplantation of living cells, tissues or organs from one species to another.

A continuing concern is that many animals, such as pigs, have shorter lifespans than humans, meaning that their tissues age at a quicker rate…

I like the symmetry.  Symmetry can give a surreal feeling implying this macabre concoction has morphed into a coat-of-arms symbolizing authority and pride instead of revulsion and fear.

And in the master’s chambers,
They gathered for the feast
They stab it with their steely knives,
But they just can’t kill the beast 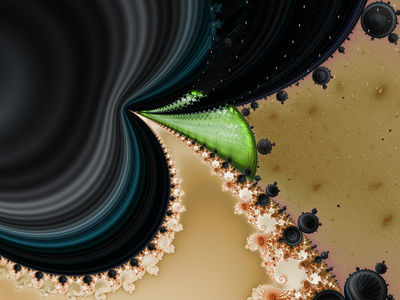 Nice coloring, interesting “zipper of the infinite” content, as well as the old “fractalscape” endlessness that is always eye-catching and reminds us that fractal art is playing with power –graphical power.  Which recursion to follow?  Paul’s next image in the series zooms into the green area, which looks small in this view but expands into the infinite in the next.  So many places to go…

Last thing I remember, I was
Running for the door
I had to find the parameters back
To the place I was before
“Relax, ” said the night man,
“ You are programmed to receive.
You can log-out any time you like,
But you can never leave! ” 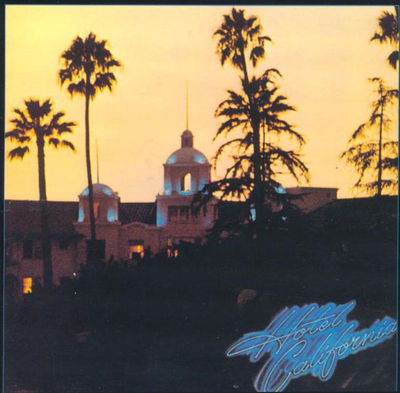 Album cover, Hotel California, by the Eagles, released in 1976 just a year after the term, “fractal” was coined by Mandelbrot (and playing ever since in endless recursion and perfect self-similarity).  Click to view back cover, inside, record sleeves, etc…

Simple album cover; just a neon sign, hazy sunset and some colonial architecture.  Computers have changed a whole lot since then, but art is still the same.