This is another one of those theoretical postings; you might want to skip it and go look at some fresh fractal art instead.  But if you’re still interested, in this posting I intend to examine what fractal art has come to be and show that this evolution of the art form has made fractal art much less relevant as “math art” and instead gradually transformed it into a less exclusive computer art genre of “synthetic art” uniting it with a wider array of software and methods, all of which do much the same thing and collectively exemplify what I call, “The Synthetic Aesthetic.”

By “aesthetic” I mean the basic style, appearance and themes that come to identify a genre of art –what the art form depicts and likes to express.  Impressionism, Photo Realism, Surrealism; these are all aesthetics.  Grunge is an aesthetic made of rough, worn, grungy things.  Oil painting is not an aesthetic, it’s just a much broader kind of thing called a medium.  The type of art one pursues and creates with oil paints can form an aesthetic, however.  Pointillism is an aesthetic characterized by points of color rather than connected brushstrokes.  Surrealism is an aesthetic defined more by a common theme than a common visual style or method.

An aesthetic is formed out of a complex collection of things and as such the term naturally involves some amount of generalization; some works in the same genre being strong examples while others may be weak ones. 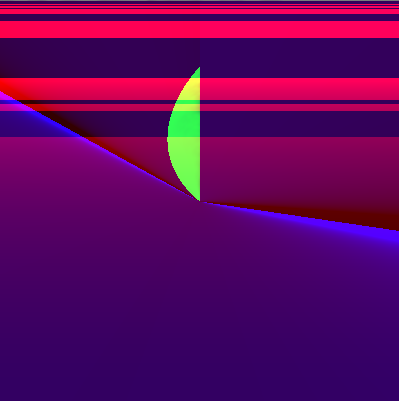 Could a “fractal” program produce this?

Firstly let’s consider the possibility of a “Fractal Aesthetic” –a distinct and recognizable graphical style associated with fractal art.

I have often sensed a disconnection between fractal math and fractal art but been at a loss to explain it since you obviously can’t have fractal imagery without a fractal formula and therefore the two can’t really be disconnected, can they?  But from the perspective of a viewer of fractal art, fractal art exhibits very little of the visible geometric and mathematical relevance that it did in its early days when artworks could also be the subjects of mathematical discussions and include intriguing image notes.  All those traditional scientific aspects to fractal art have drifted into a behind the scenes role while the increasingly dazzling graphical rendering techniques have taken center stage.

Few fractal artworks seem to contain the distinguishing characteristics of the formula used to create them.  This is because, knowingly or otherwise, fractal artists simply use fractal formulas to create a source of imagery –a pool of imagery– from which they fish around in and select from.  The fractal formula’s unique characteristics is rarely the actual subject of their work.  It could be if they wanted, but that isn’t what seems to excite fractal artists much or draw their interest.

This shifting of the spotlight from clear fractal formula structures and characteristics to fishing around for whatever looks “awesome” isn’t a product of the medium, it’s a preferential choice made by artists.  Perhaps straightforward, identifiable fractal images with spirals, mandelbrots, minibrots, and julias and so on are seen as cliche and dull by most fractal artists today? 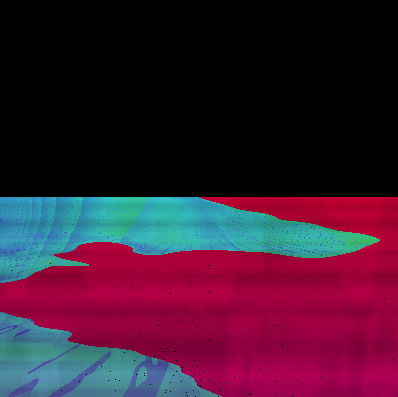 Would you recognize a fractal imposter?

I once argued that “un-fractal” imagery was the pursuit of most fractal artists nowadays.  If it is, then it’s a reasonable and expected sort of behaviour as even the most exotic fractal formulas like the buddhabrot, for instance yield more creative power from tweaking their rendering options and carefully selecting detailed areas of them than they do from tweaking their formula parameters.  Rendering is where the artistry takes place.  Also, artwork that focuses on the formula tends to have less of a “personalized” appearance and represent less of an artistic accomplishment.  Once again we’re back to the problem of creating work that avoids anything that is perceived as being cliche, something that formulas of any kind are apt to produce.

The fractal aesthetic is easy to describe and identify.  Basically, whatever looks like it was made in a fractal program is literally the fractal aesthetic.  That might sound rather simplistic and vague because fractal programs produce such a wide range of imagery and offer such a wide range of rendering options, but actually the fractal aesthetic is easy to spot by people who, ironically, are not fractal artists.  Try uploading a fractal image to the wrong category on Deviant Art and see how quickly someone “spots it”.  Fractal artists might think their genre is one of subtleties and arcane mathematics but to everyone else it’s pretty plain and obvious. 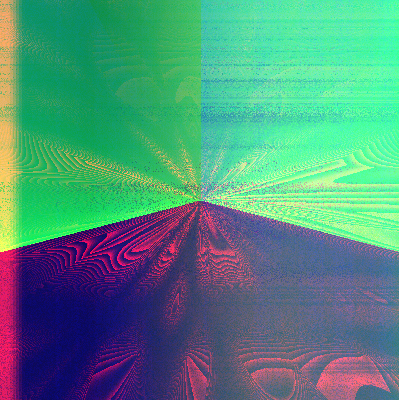 Fractal programs have created an aesthetic of artificially composed synthetic shapes and patterns.  For example: arrangements of twisted tubes; balloon like sausages; lightning bolts in crushed paper; vast fields of fractured glass; bubble vistas; gardens of glowing gas; anything with a spiral (that’s an obvious one); jungles of geometry; simple shapes with subtle changes in color and texture across every pixel; mettalic imagery that radiates with infinite detail;  etc…  These are the hallmarks of fractal art; occasionally the elegance of math, but always the wonders of exotic rendering options.

We have collectively created an art form which is quite distinct and quite distinctive.  It’s just that the thing that distinguishes fractal art is no long fractal geometry, its the synthetic rendering techniques; these have become the “face” of “fractal” art.

Fractal programs “draw” just as people draw using a graphics program.  Fractal programs, however, draw with the stiffly deterministic but amazingly talented robotic arm of a fractal formula.  It’s the drawing styles of fractal programs (rendering methods) which have become the focus of fractal art rather than the fractal formula which is directing the program’s “pen” or “brush”.  The subject matter therefore of most fractal artworks is usually a zoomed-in fragment of a rendered formula which depicts some interesting effect created by the rendering technology –or exaggerated by it– rather than a unique and identifiable piece of the formula’s mathematical anatomy.  Artists could chose to focus more on mathematical and scientific “portraits”, but most chose not to and subsequently fractal art has come to be an art form of “renderisms” rather than famous formulas.

Again, I don’t see any of this shift to “renderisms” as a bad thing.  In fact, I find the whole thing rather exciting, now that I see what’s going on.  Fractal art is an artistic pursuit and fractal artists care a whole lot more about how artistically appealing an image is than how well it depicts fractal geometry (if at all).  In fact, and this is my main point here, fractal artists hardly ever attempt to display recognizable fractal characteristics in their images because that’s not what interests them.  Nobody is ever worried that their artwork will lose it’s “fractal status” as long as they stick to using fractal software.  The creative process is such that the formulas become the graphical engine of the fractal software while the rendering techniques for the most part determine what that artwork looks like.

This of course is what makes Terragen, a graphical landscape generator, although it utilizes fractal formulas, disqualified from creating fractal art: it just makes pretty landscape scenes with the help of fractal computer code.  Fractals are merely part of Terragen’s graphical processing.

Terragen is an extreme example of fractal algorithms creating un-fractal art, but many fractal artworks whose subject matter is some (magnificent) detail plundered from the deep recesses of a fractal image and rendered in an exotic way are just as cut-off from their fractal roots as any sun-splashed mountain scene from Terragen.  The only difference is that Terragen scenes are immediately recognized as something familiar and easily classified –as landscapes.  Everyone knows that Terragen images aren’t fractals because they can clearly see that they’re landscapes.  The hidden fractal characteristics are merely an interesting anecdote to go along with the image as well as any other trivial about “how they were made”.

Which brings me to the title of this posting, “The Synthetic Aesthetic”.  Fractal art settles quite logically and reasonably under the graphical label of “synthetic” rather than “fractal” just as “Terragen Art” fits intuitively into the category of “landscape” rather than “fractal”.  Fractal art is the use of fractal formulas to synthesize art.  But that synthetic art, although distinctly derived from the processing powers of fractal formulas, resembles in appearance many other kinds of computer synthesized artwork.

In fact, I think the distinction between fractal art and any other kind of computer synthesized imagery is entirely a matter of tradition, specifically a tradition that has assumed that fractal art was a special form of art because it was uniquely mathematical and therefore “different” because of that.  Fractal art is uniquely fractal in its method of creation but that feature no longer leads to the creation of artwork that is graphically unique in its appearance when placed in the context of other computer synthesized artworks.  In fact, ironically perhaps, the fractal aesthetic has actually come to be one of the best examples of the synthetic aesthetic.

I have more to say about this.  In Part 2 I will try to show how “synthesized art” is so close to fractal art aesthetically that separating the two groups from each other is creatively inhibiting as well as artistically retarded.  But I won’t use words like that.