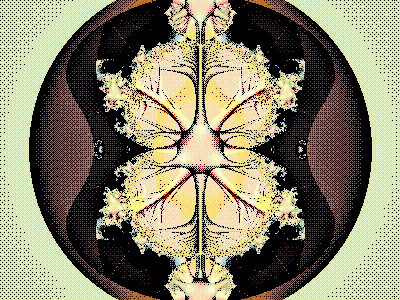 Although most labels in the art world have a number of interpretations, I define algorithmic art as artwork made with algorithms. An algorithm is a series of instructions.

Usually these instructions are computer commands and algorithmic art is made with computers. But it’s the “mechanical” component that makes algorithmic art special and the machine doesn’t necesarily have to be a computer. 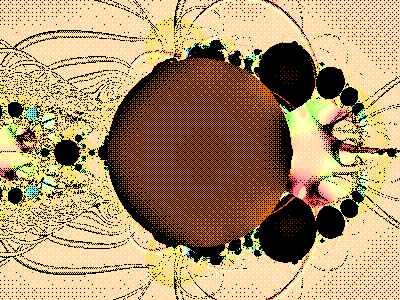 Fractal art is a type of algorithimic art. The algorithms are primarily the fractal formulas but also the other programming components which contribute to appearance of the generated image.

Although purists would say true algorithmic art has no human modifications to it or any other human contibution (except creating the algorithm or operating the machine, of course), such a strict approach rarely works. 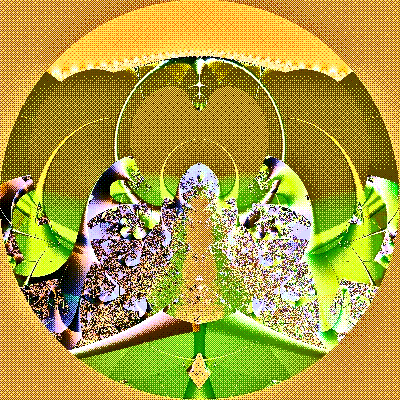 A small amount of human guidance yields enormous profits in the creation of algorithmic art. In fractal art this guidance comes in the form of adjusting coloring effects or choosing what part of the image to display, or adding layers, or any other arbitrary decisions that interrupt or alter the process of image generation.

Although randomly chosen parameter settings could theoretically reproduce all the adjustments made by a skilled fractal artist, I have never seen any examples of such mechanically made fractal art (ie. having a skilled appearance). 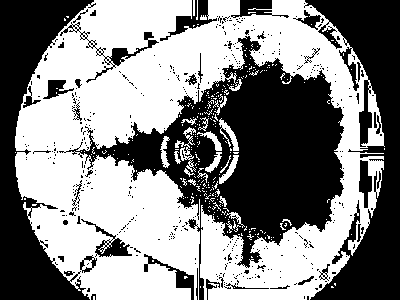 So algorithmic art (if you accept my non-purist definition) is primarily a collaboration between artists and machines. The more decisions the artist makes, the less mechanical the artwork is. The less involved the artist is with the process, then the more mechanical it is.

The machine becomes just another tool when complex layering and coloring are involved, similar to a brush in the hand of a painter… Digital brush, Digital canvas –Digital da Vinci.

But when the machine is elevated to the lofty status of “Giver of Art”, “Oh, Silicon One”… It’s every graphic utterance received with rejoicing and exultation… The artist reduced to a selfless slave, a lever pulling worm toiling in the shadow of The Great Mechanical Meta-Marvelous Master of Algorithmic Awe-Wonder…

I need to clean out my browser bookmarks. I accidently clicked on some old thing anonymously titled Main Menu, Algorithmic Art.

Richard Nixon once said that the reason people go to hear politicians speak is not to find out what they’re going to do if they get elected, but to find out, “What makes this guy tick?” We’re all curious about people and why they do what they do.

Honestly, I could never figure out what this guy saw in his own work. Why the excitement?

He’s got a pen or marker attached to a drafting plotter that draws the results of some algorithm. It’s nowhere near as interesting as even a simple mandelbrot formula would be. Has he never heard of fractals? 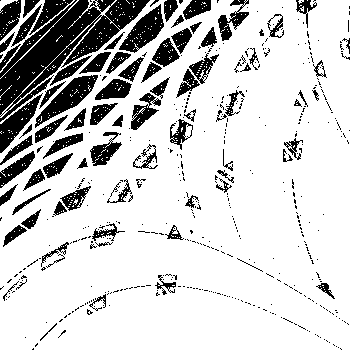 This second visit to his website, after a space of about a year, left me with a different impression. I think I know what makes this guy tick, now.

Look at the presentation of his, uh, simple images: Artwork framed alongside -and giving equal space to- the binary code of the algorithm that made them. The 0’s and 1’s starting and ending with a short strip of gold leaf! 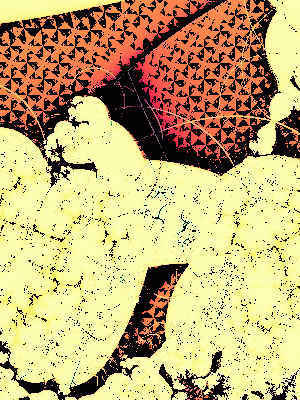 I was touched by his reverence for the machine and I felt ashamed of the insulting things I had once thought about his work.

He’s not ashamed of the mechanical roots of his artwork. In fact, he seems to see it as something to be admired, as if binary code could almost be beautiful all on it’s own. Just like some architects who allow a building’s stuctural components, like iron girders and concrete pillars, to be exposed as elements of style, having their own massive and mechanical, primitive charm.

3 thoughts on “The Robot’s Renaissance”