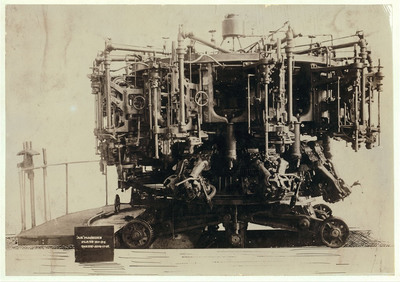 Synthetic art has only one principle to it: the creative device.  As a result, the synthetic aesthetic is not bound to any particular medium but rather is a way of being creative within any medium.  The computerized medium holds the most potential for synthetic art because it allows for much easier creation of visually creative devices.

Another way to grasp the concept of synthetic art is through the “inverse selection” of this principle of creative device.  The opposite of the creative device is of course the manual, hand-made expressions of a person (i.e. artist).  “Hands-off art” would not be a bad definition of what the synthetic aesthetic pursues and presents.

A word about art definitions…

One shouldn’t approach artistic categories the way one does mathematical or scientific ones; fractal geometry is much easier to define than fractal art, for instance.  A little bit of non-synthetic “embellishment” doesn’t constitute the sort of fatal contamination that would relegate an image to the proverbial “mixed media” category.  One needs to exercise a bit of judgement and decide what the “substance” of an artwork is comprised of rather than waving an artistic geiger counter over it to locate subtle contaminates.

You won’t find clean categories in art, but the synthetic principle is such a strong one and wields such enormous artistic influence that perhaps it is one of the few categories of art that is both meaningful as well as easy to define.  Start by looking for a creative device.

As an example of an art device and also an example of how “unclean” art categories can be, consider some of the works of Max Ernst (1891-1976).  I posted about him earlier but without the crisp, well-focused context that this series of postings on the synthetic aesthetic gives to his work. 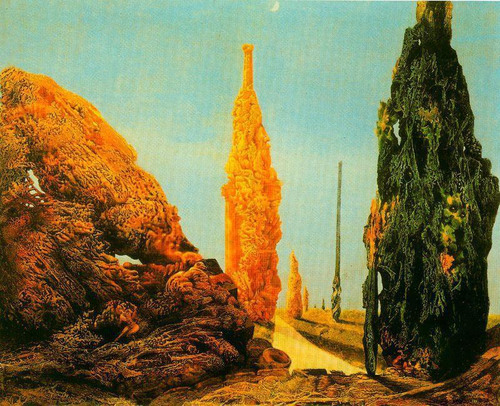 The device used here is that of squishing paint between two surfaces such as paper and glass, or canvas and glass.  It’s a mechanical thing because the results are created entirely by the apparatus and only modified slightly by the operator/artist.  Obviously there was more to the making of this painting by Max Ernst than merely squishing paint.  Ernst would often add human figures but its the decalcomania imagery that creates the surrealistic impression here.  It’s hard to leave synthetic imagery alone since it often inspires and suggests.

You have to remember that synthetic processes are merely techniques that one pursues in the hope of making something that looks good.  They aren’t a treasure map to a place where one goes and digs up great artwork.  The use of synthetic machinery is a skill all its own.  Perhaps even something of a talent rather than something one can learn.  You have to see the potential in it to keep at it long enough to see results.

As an interesting comparison, consider this fractal collage (below) by Segami: 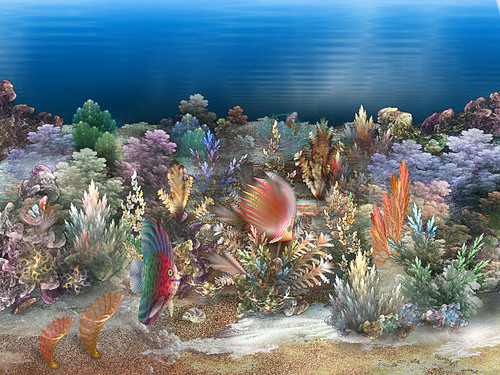 The synthetic aesthetic is there in the form of the detailed coral shapes.  The effect is “weakened” by the artist’s assemblage of the fractal elements into an easily identifiable natural form (coral reef), but he’s following in the steps of Max Ernst who, like Segami, was inspired by the images and modified them somewhat.  I say “weakened” because of course many viewers will consider the artist’s influence on the final work to be an improvement.  But I find truly synthetic artworks to have an alien spark to them that is worth seeking out in its natural form and preserving.

Mark Townsend, more well known for his fractal artwork, has made a number of decalcomania works.  Here’s an example: 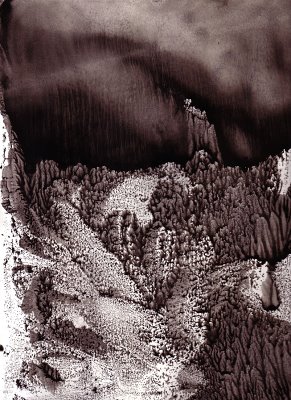 I remember a conversation I had with Mark at the time in the comments section of Orbit Trap (or somewhere) where I described the technique as algorithmic and he disagreed.  He was right about that, but I think what I was trying to get at was that the technique was not handmade and was produced by a creative device.  “Algorithmic” indicates a process that works by applying rules or predetermined instructions, like a fractal formula.  In a sense though, squishing paint is a type of algorithm whose outcome is defined by the materials and not the user.  The difference however is that the initial conditions of paint placement and the subsequent squishing motions on the glass or paper are not so carefully programmed or choreographed to be considered “formulaic” or rule-based.  And yet, decalcomania images have a distinctive look that transcends the influences of their individual “artists” and gives the impression that they were all painted by a single pair of invisible hands.

Art that invents itself

“Hands-off art” is really a matter of not drawing and not painting; not using one’s hands to make something from one’s imagination.  Synthetic processes involve the use of one’s hands but only as operators of the machinery.  The human mind is disconnected from the artwork in the synthetic process while in the non-synthetic processes, drawing, painting, sculpture, etc… it is connected through the movements of the artist’s hand in the action of drawing or painting.

Synthetic artwork provokes the artist’s imagination; handmade artwork expresses the artist’s imagination.  It’s interesting how Max Ernst and other artists using similar synthetic techniques back in the early days of Dada and Surrealism emphasized the “mind-less” nature of the synthetic creative process rather than trying to hide it or trivialize it as most fractal artists do today as they try to make themselves appear more dignified and worthy of the title of Artist.  To people like Ernst the inhuman quality of synthetic imagery was exciting and probably the only reason they pursued it since they were all capable painters themselves and synthetic processes merely offered a way to disconnect from that and produce imagery that was impossible for them to make with their own imaginations.

Painting is not for me either decorative amusement, or the plastic invention of felt reality; it must be every time: invention, discovery, revelation.  -Max Ernst

This is why I said the synthetic aesthetic was so powerful that one doesn’t need to so carefully define it using the sort of detailed and subtle characteristics that are normally used to draw boundaries in the art world.  The alien presence of mechanical artistry is easy to spot for its lack of intentionality and deliberateness.  To build on what Ernst has said, with creative devices there is no attempt at beauty (i.e. decorative amusement) or, reflection on reality, because the devices lack the capacity for both those sorts of activities –such activities which are the hallmarks of the human artist.

However, mechanical artistry’s lack of intentionality and deliberateness (i.e. brute stupidity) can sometimes produce, by virtue of its capacity for producing prolific quantities of imagery, works that possess a new kind of beauty and new kind of realistic expression.  The “artist” is simply the first member of the audience and before his eyes the art invents itself.

One simply has to pursue “invention, discovery, revelation” with as much effort and thoughtfulness as artists in the past pursued their handmade crafts of painting and drawing.  In the synthetic art form, one directs the creation of artwork rather than performing it themself, and then one selects from what is made with the caprice and pickiness of one who has at their disposal a buzzing hive of eager and indefatigable machinery.

In part 5… the pioneering efforts of the surrealists and how today’s cheap photoshop filters are carrying on what was started almost a century ago.