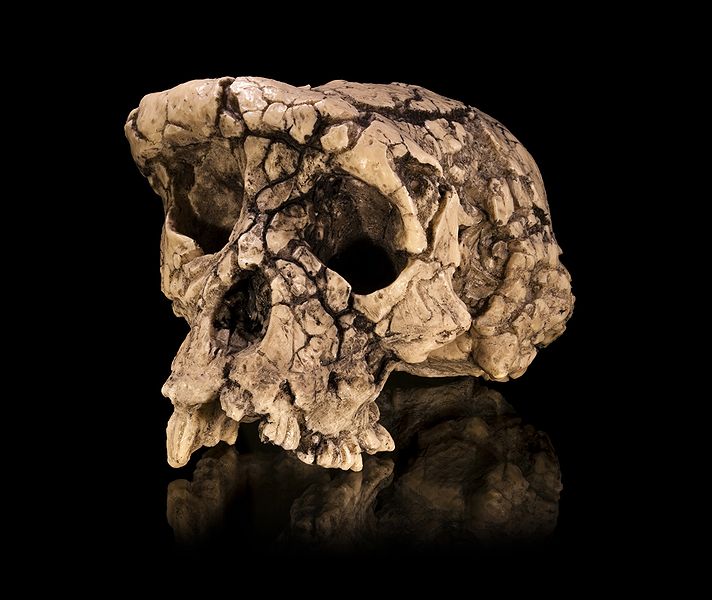 Although the works of Max Ernst (1891-1976) might exhibit a pronounced frontal brow on their foreheads, closer examination reveals startling similarities between them and the contemporary fractal art that now inhabits the same landscapes they once did.

Europe After the Rain by Max Ernst 1942

Ernest employed a technique of squished paint.  Touched-up obviously and with some additional hand-painted elements, but what a fine way to represent the airborne decay of the European urban landscape in the early days of WW2.  The abstract, unrealistic imagery of paint squishing (decalcomania) has real similarities to the algorithmic renderings produced by aerial bombardment.  Ernst’s image is a better expression of that because it works even worse thoughts in our imagination.  It also, perhaps, served as inspiration of Ernst himself to produce the work he did.  The same imaginary effects that work on the artist are felt by the audience too.

If you will forget for a moment the central theme of Ernst’s work here, you will undoubtedly recognize a proto-mandelbox in this image.  Seriously, Ernst is portraying a single, monolithic image of a “lump” as an iconic image for a city.  But wait, what came first?  Was it Ernst’s idea to portray a city this way, or was it Ernst’s creation of an interesting “lump” that triggered the concept of The Entire City in his imagination?

Again, the imaginary workings of Ernst’s imagery conjure up a twilight zone where abstraction and realism meet. 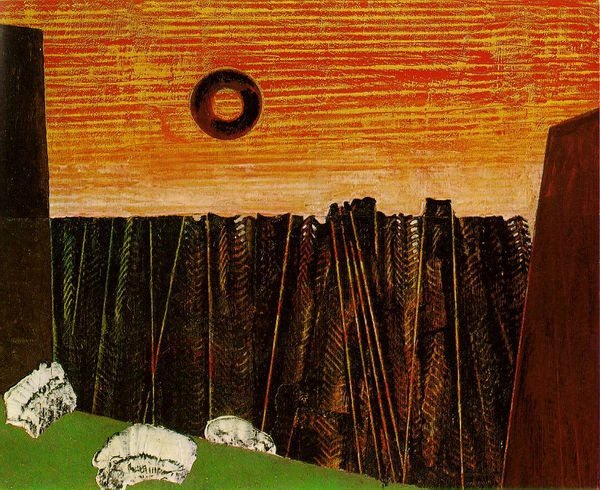 Did he make that circular Sun-like object in the sky by pressing a pop bottle into the canvas?  Artists like Ernst are sometimes shockingly creative.  Of all the skulls we’ve unearthed here, this one displays the fractalopithecus family characteristics the best:  Abstract imagery used to imagine an alternate but legible reality.

It’s an example of what fractals can sometimes do because fractals are primarily abstract but can sometimes be found in naturally occuring formations where they suddenly suggest realistic themes.  I call this neither abstract nor realism but instead: imaginary.  It’s already cropping up here and there because fractal artists sense something of interest in their imaginary scenes but they fumble with the terms for it because the currently used terms don’t apply to this artificial “realism”. 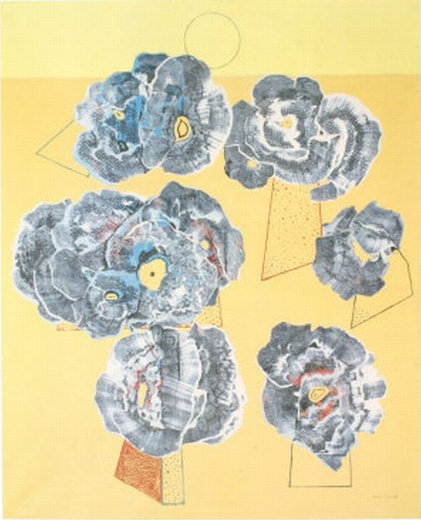 Unfortunately I can’t find a larger version of this image (or the year it was made).  Perhaps it is perennially new because every viewer interprets it differently.  It’s more than just a study of popcorn; the flowers have transcended their real forms and become vivid imaginations of what they once were.  We will not see flowers like this anywhere in the world, and yet we will recognize them when we do.  The same imagination is present in both graphical experiences, real and imaginary. 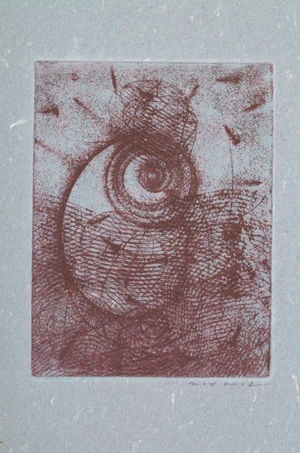 The Birmingham Museums and Art Gallery site says this about the above image by Ernst:

The most inventive prints by the surrealist Max Ernst were arguably produced after the Second World War in collaboration with the master etcher George Visat. This is from a series, developed in the early 1960s, on the theme of the ovoid or egg shape. This most essential of natural forms is here conceived as a constant spiral, half-submerged in a web of textural irregularities. In this ‘hidden’ vision, Ernst appropriately pays homage to the symbolist poet Arthur Rimbaud (1854-91).

“Inventive / theme of the ovoid or egg shape / hidden vision / symbolist” I’m not the only one to see modern things in this pre-fractal artifact.

Imaginary art opens it’s mouth but it doesn’t speak –it sings.  The title can be part of the work and not merely some stuck-on thing; an iconic utterance as ancient as Adam naming the animals.  It doesn’t stick; it protrudes from the image. 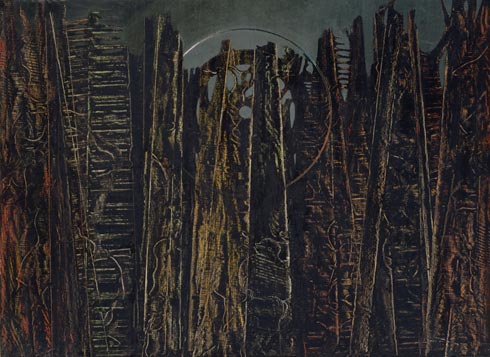 Forests don’t look like this, but some do feel like it sometimes.  There is a forest like this somewhere out in the world, undiscovered by us, and this image prophesies it.  Imaginary art slips past our eyes and makes a direct appeal to our minds by conveying, in secret alphabet, a message our eyeball gatekeepers would have turned away.  It’s a parable or metaphor: more real than the real thing.  I can’t think of any better way to define what “art” is than that: art is what you think of when you’re looking at it.

There are great expressive possibilities for fractal art.  But first we have to accept, like I believe Ernst accepted with his own work, that we are better off letting it direct us than we are in trying to direct it -being the directed rather than the director. How can one make imaginary things?  They can’t, of course.  But we can look for them and decipher their names.