Whether you’re a fractal artist or simply just a fan of fractal art, you’re bound to eventually notice similarities in style and develop preferences for this kind of art or that kind of art. Fractal art is still what I would consider to be something of a niche art form, but thanks to the internet, enough of it has been created and displayed that one can start to see styles emerging.

The most obvious style to anyone observing fractal art today is what I would call the Ultra Fractal Style. It’s more than simply art that is made with the popular program Ultra Fractal now in it’s fifth version; the UF Style focuses on the enhancement of basic fractal imagery by constructing, through the use of graphical layering, images with very elaborate structure and detailed surface texture. The UF style has pioneered a movement away from simple fractal forms in favor of images that rival the most complex creations of popular graphics programs like Photoshop.

While most fractal enthusiasts have eagerly adopted this style and some have even categorized their artwork as Before Ultra Fractal and After Ultra Fractal, I see this style as more of an abandonment of fractals as an art form than an enhancement of it. While not all artists utilizing the powerful programming and layering features of UF produce work that would fall into the category, UF Style, most artists using the program lean heavily on the program’s graphical rendering powers and make little effort to explore the fractal side of the art form.

Two recent fractal artworks, both of them winners in the BMFAC of recent years, exemplify what I would describe as the UF Style. The first is by Dave Makin, entitled Theme Park 2 and was a winner in last year’s contest. The second by Nada Kringels, And how is your husband Mrs. Escher, a winner in the 2006 contest. 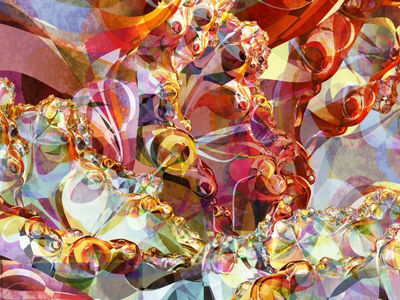 Sheets in the Wind 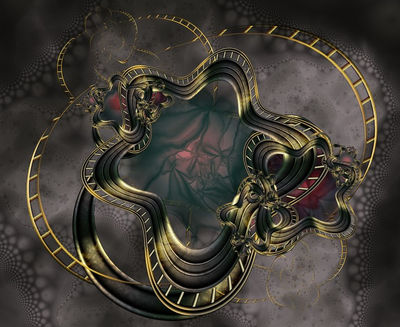 I’ve labeled them Sheets in the Wind and Rings of Gold because those are the best descriptions I can think of to summarize the kind of imagery that characterizes the UF Style and these two images are some of the finest examples of it in addition to being familiar to many people in the fractal art world because of their presence in past BMFAC exhibits. These two images have met with critical success and therefore represent not only the artist’s own preferences in fractal art, but the confirmation of those preferences in the larger fractal art world itself by their selection in the contest.

I think if one reflects, even just a little, on what they see displayed on the internet as fractal art, they will see that most of it falls into this UF Style category and the epitome of it is work, like this, that features not fractal forms but rather the slick rendering powers of this cutting edge graphical program. It’s not the fault of the program, and similar results can be achieved with other fractal programs or with other software combinations, it’s just that most fractal artists today have fractal art all backwards.

Their approach is backwards; rather than first seeking out an interesting fractal form and enhancing it graphically, they start with some mediocre fractal form, or several, and then try to make it interesting by, literally, layering it with gold or tweaking the colors to produce some attractive piece of fluttering fabric. I see this in both these images. Rings of Gold at least exhibits some recursive pattern, although the pattern, without the gold, is not significantly interesting. Sheets in the Wind is, at best, a borderline fractal image and would only suggest a fractal origin if viewed in another context, such as, a collection of Photoshop artworks, because the image is abstract and reasonably complex enough that it would have required some sort of computational help, a fractal program perhaps? Why either of these images were chosen to be part of an exhibition to introduce people to fractal art says something about today’s fractal art world and it’s own view of itself.

It’s cliche. I don’t just mean that it’s popular. Although popularity can create cliches, cliches arise because of a lack of new, innovative ideas. Those new, innovative ideas can also in turn become cliche, but only if the art form loses it’s creative force and stops developing. (And what would that look like?)

Dave and Nada are making artwork that I believe they truly enjoy and as I’ve suggested, their winning spots in the BMFAC shows that they are not alone in pursuing this UF Style of work. The judges, as shown by their selection of Dave and Nada’s work consider it to be exceptional and worthy of distinction in their contest. So my real criticism of the UF Style is not with any of the artist’s that make it –that’s their personal preference in art. My real criticism of the UF Style is how it’s come to be critically accepted. First off, it’s only weakly fractal; and secondly, it’s visual attraction is almost entirely based on slick looking computer imagery effects which, honestly, might have excited an audience back in the early 90s, but which now are found in almost every television show or advertisement. If they think this sort of thing will wow the average person on the street who they’re trying to introduce to fractal art, they’re mistaken.

Fractals have a lot of artistic potential and a kind of imagery that easily captivates most people regardless of whether they understand the mathematics behind them or not. But the UF Style of artwork resembling Sheets in the Wind and Rings of Gold isn’t like that at all. It’s cliche and it’s hung on this long because nowadays most fractal artists prefer to tweak mediocre work to perfection rather than experiment with fractals. If they want to make that sort of thing, that’s fine, it’s their artistic choice, but giving it awards and presenting it as the best in fractal art just makes us all look stupid.