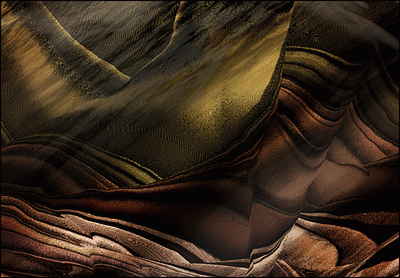 lesson_2_atmosphere_isolation_for_janet
Click to Enlarge
I found this in the Student Galleries section of the Visual Arts Academy.  There’s no name or date but it’s filed in the Ultra Fractal Artistry section of the gallery, a course given by Janet Parke.

I like this.  In fact, I fished it out of all the student works there as the one that appealed to me the most.  However, I should mention that most or all of the works there are probably produced for specific course assignments and to demonstrate competency of the course material, so it’s not the standard sort of online gallery.

This is a fine example of a number of things.  For one it shows how the complex graphical features of UF can be used to compose interesting artwork that would be eye-catching in any venue, fractal or non-fractal, or even online or off.  The image is really indistinguishable from any abstracted landscape painting found in a traditional gallery.  Although details often change when viewing digital artwork at differing levels of resolution and size and also when produced as prints, what I can see in this image is a darkened, moonlit, landscape barren of features and yet very expressive in a surrealist way.

If the purpose of this course was to teach artistry, then I’d say the student has learned something or at least polished whatever they already had.  But perhaps teaching artistry in the context of a program like UF which has so many user-controlled graphical functions is much easier and also much more necessary as its features allow the user to work with fractals the way one would work with photos in Photoshop.  UF is a program designed to give artists creative control of imagery; to paint with fractals in the sense, as I mentioned, artists work on photographic imagery in Photoshop.

UF is a program that enables a wide range of conventional digital artistry.  It’s natural then to teach a course on how to use those conventional layering and masking features in the context of fractal generated imagery just like the example I’ve selected here.  I’m quite curious to see what sort of influence these online courses at VAA have on the development of fractal art.  I really think that regardless of the instructor’s personal artistic preferences and whether they fit with the student’s own, one can only hope to gain something of value from instruction even if it’s only a better technical use of their tools.

Back in High School art class, our art teacher’s taste in art seemed to focus on gardens and other forms of colorful foliage.  Not the sort of thing that appeals to iconoclastic teenagers, but we learned a lot about composition, design, color, and the importance of developing a personal style.  The teacher never expected anyone to imitate what she did, and I don’t think any of us angry young artists did, although some of us did gain a greater respect for the fabric, wax and dye medium called Batik.  Man, she made one almost three stories tall!

Are there some similarities in this student work to Janet Parke’s own style?  I suppose, in a general way, perhaps the color scheme and flowing, folded shape of the structures in the image, although these are becoming fairly common choices in UF work these days.  But there’s a harsher grittiness to the student’s image and a significantly more saturated, less muted tone to the colors that makes for a very different mood.  I’d say the style is quite different, although, like I said, such details can be distorted by changes in image size and as we all know, in UF, image size can be pretty big.  It’s quite possible that the image we’re looking at is a mere thumbnail of what the instructor and the student were viewing for the purposes of their coursework. 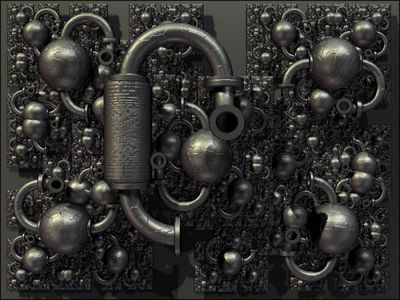 By Helmut Tarnick, XenoDream Introduction Course
Click to Enlarge
People often go nuts with XenoDream and try to concoct all sorts of creative, but confusing images.  And they’re almost always made of brightly shining gold or silver that looks just too clean and shiny to be real, not to mention it’s use, in flowing liquid form, spashing about in impossible ways.  So what I like about this one by Helmut Tarnick for Joseph Presley’s XenoDream course is the relatively simple yet appealing shape he’s used and the tasteful and realistic steel surface he’s given it that allows me to study the image without having to put on sunglasses.

Interestingly, the larger image you’ll see on the Student Gallery page by clicking on the image or caption, looks less photographic than this smaller version I’ve used here.  Realistic surface texture is easier to do in lower resolutions obviously.  But I’d check out such technical things with Professor Presley before you go saying that on the final exam.  Why should the iteration of such a simple piece of metal look so appealing?  It’s a fractal thing, I guess.  The self-similarity and ever expanding number of pieces at lower scales just naturally captures our attention when done tastefully like this.  Also, there are simple, but intriguing patterns to be seen if you study the image carefully to find the juxtaposition of the same element repeated at differing scales –a basic fractal characteristic.  Overall; a very skillful and artistic use of XenoDream’s capabilities.  Maybe Helmut will be teaching his own course one of these days?