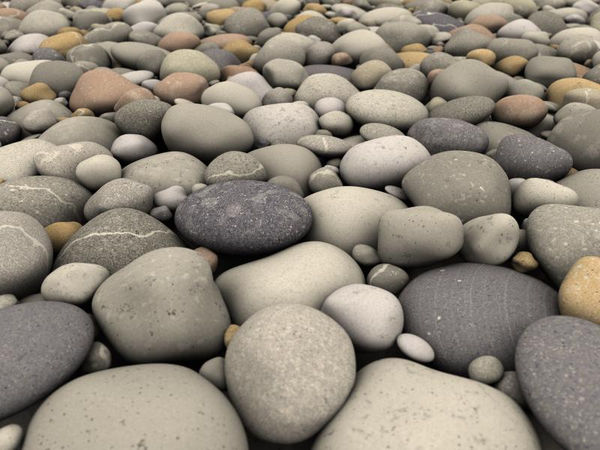 Pebbles by Jonathan Hunt, 2008. Made entirely in POV-Ray

There is a definite use and function for digital photorealism, but it is almost exclusively the domain of the craftsman and not the artist. Artists don’t get a thrill out of copying the world around them like dedicated craftsmen do. Artists get a thrill out of the mental excitement that comes from the portrayal of new thoughts and feelings. Photorealism can be used for that; the surrealist paintings of Salvador Dali are what I would consider the best examples of artistic realism. As a painter Dali was average. As a surrealist painter Dali was one of the best.

What fractal art has going for it as an art and not as a craft is that it’s different. Trying to imitate other things might attact an audience for a time, but in the long run there’s little to come back and look at and chances are very good that your work will soon be overshadowed by an even greater imitator. Or equally likely — obscured by a cloud of imitations.

Graphical computer algorithms like fractal formulas and other image generators are powerfully creative because they are original. They can generate imagery that a human would never even think of. If you want to discover buried treasure then pursue the algorithmic nature of fractal art. If, however, you just want to dig a better hole than the last person, then keep digging — the competition is intense.

Things have changed very quickly in the computing/digital world and now graphics often have a near (close, but not perfect) photographic appearance making one uncertain at times whether they are viewing a computer-made image or a photograph of something real. It’s strange then, that the old style — primitive — computer graphics of 256-color, or even 8-color, indexed pngs and gifs of the “old” days (1990’s) would have any sort of appeal to someone like me or anyone with any knowledge of computer graphics who one would expect to admire only that which is current and represents the latest technology.

I think however, that it reveals something about art that is very relevant to the digital art world but is something that has yet to be grasped by many who enjoy digital art: Photorealism can be boring!

Imitating reality is pointless in a world of easy realism (i.e. photography) and in a world which, as stupid as this may sound, realism is common and hardly eye-catching because we see it everywhere, everyday. 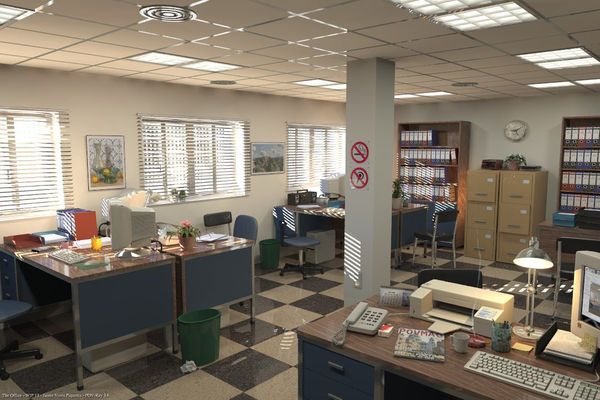 The Office by Jaime Vives Piqueres, 2004. Yes, this too was made in POV-Ray.

I mention this particularly because I’ve gotten the impression from browsing online digital art galleries, that many people seem to feel that the apex of digital imagery is the imitation of real things — photorealism — and that anything that looks “rough” or “primitive” or “poorly anti-aliased” is shrugged off as unprofessional, unskilled or ugly.

I think digital art is stuck in a very limited (and boring) role of trying to “beat photography” and come up with images that provoke the response, “Wow! I can’t believe that’s not a photograph!”. Although occasionally this may be a rewarding pursuit, it’s a creative dead end. What that means for the future I believe, is that the more interesting and more creative digital work will be produced by people who pursue the types of imagery that have never been seen before and don’t currently have categories or convenient labels. Faking photographs won’t make that happen.