I’ve been spending alot of time in my garbage can lately.

Never before has it been such a delight to retieve stuff I thought was worthless, even the things stuck to the bottom of the can. I feed them into the uscomic.8bf machine and out comes instant Strange Tales and Journey into Mystery 1960’s vintage comic book imagery.

Not only that, part of the process reduces the image to only 8 colors which makes for bright and solid indexed pngs with file sizes as small as the prices on old comic books. (They used to sell for 10 or 12 cents in the early 60s.)

Of course it’s not art or anything like that. Are comic books literature?

In keeping with my cheap, economical ways, I’ve been using a program called XnView. It’s just one of those free image viewers that allows you to browse directories of images by creating a bunch of thumbnails.

It also had a few “effects” with it. Nothing special, just versions of common things like oil painting and the shakey shifty smudgy ones. Also a funky dithering thing that makes images look like they’re full of cross hatching and dots like they used to use in the old days to fake colors that were too expensive to print separately.

A really bad inkjet printer does the same thing. It looks great.

Anyhow, XnView has this menu option that says “Adobe Photoshop Plugin.” Now that sounds professional and stuffed with money to me. But no, you can get them for free too.

Whoever figured out how to get Photoshop plugins to work with other programs for free deserves some kind of special award. (That is, as long as it doesn’t cost anything.)

So among three or four hundred other plugins I downloaded one evening, was this uscomic.8bf. Filters or plugins or whatever, are either very cool or absolutely stupid. I got about 398 stupid ones and two cool ones. The other one produces a black and white (2 color) pen and ink image. 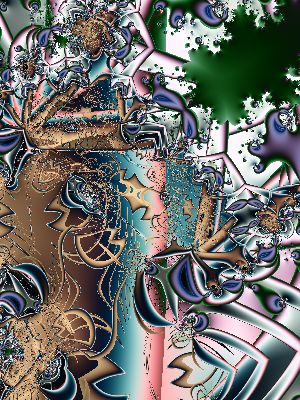 What was I thinking when I saved this? (57k) 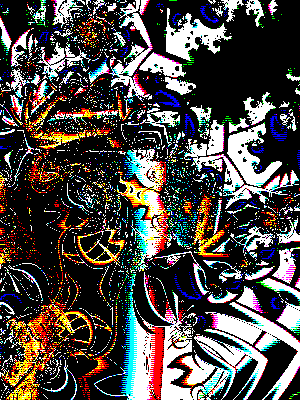 Oh yeah! Cosmic Creatures and the Invasion from Space! (18k)

The comic filter fixes up lousy color too. Or rather it makes it look like an old comic book; which might not always be what you want.

Of course, the real excitement comes when you start to combine filters and develop sequences or “algorithms” that, more often than not, produce good effects.

For instance, inverting the output of uscomic looks pretty interesting sometimes. It looks silkscreened and rather artsy; not comic bookish at all. But I guess that’s what you’d expect the opposite of a comic book to be.

I could have anti-aliased this, but it would still be a mess (46k) 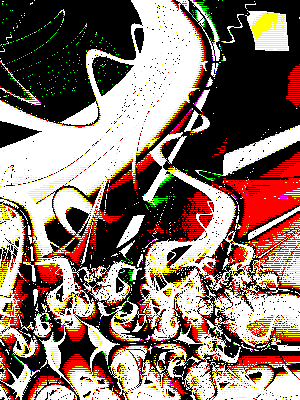 As a somewhat humorous postscript, I accidently discovered the underlying simplicity to much of the uscomic filter. I clicked on the adjust “brightness/contrast/gamma/balance” tool to prepare my raw image for the filter and saw the image go comic book all on it’s own.

It seems the last settings for the tool (which it automatically restored when I went to use it again) were +77 for brightness (range is -127 to +127) and +127 for contrast. This produces almost exactly the same results as the uscomic filter –even the color reduction to 8 colors. Bright images will need to be inverted to complete the effect.

The graphics program is like a guitar. Look at all incredible music that can be made with a guitar. And it’s only got six strings.