A collection of uniquely rendered fractal things.  And a few that are just traditionally intriguing. 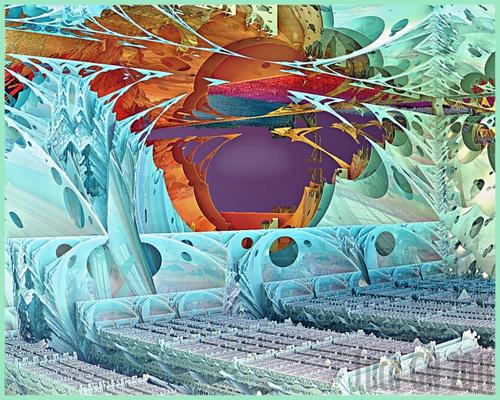 I almost skipped by this one while browsing away on Deviant Art.  I think the icy-blue fruit chew wafers caught my eye and stopped me.  Most people use Earthly colors for their mandelboxes but LucaGN must have asked, why? and came up with something wild and avante garde.  If you check out the full size view you can see some nice Martian imagery out the “window” in the center. 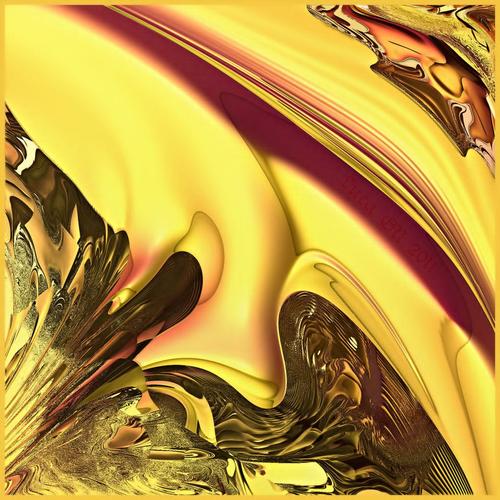 Primitively fractalic.  Must have been baked in a square pan as it fits the frame perfectly.  LucaGN has a good eye for this sort of strangely stylistic imagery.  I still can’t figure out what I like about this one but maybe LucaGN saw the same thing too.  According to the image comments on DA “Eva” is Xantipa, the Fractal Queen of Color. 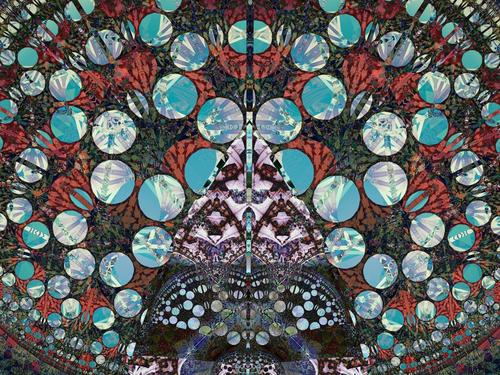 “Ducks”  Next to the whole 3D thing, the “Ducks” formula or whatever it is, is the most exciting thing to happen this year.  Samuel Monnier on his Algorithmic Worlds Blog explains it better than I can.  I just look at “Duck” pictures and see that Ducks is a creative and surprisingly unpredictable thing full of variation.  Timemit adds something more and has captured an almost Art Nouveau kind of geometry/organic fusion thing.  …silkscreen, batik, it’s just very captivating and really surprised me.  Maybe Deviant Art is more than just a playground for socially disturbed people?  I’m beginning to think so. 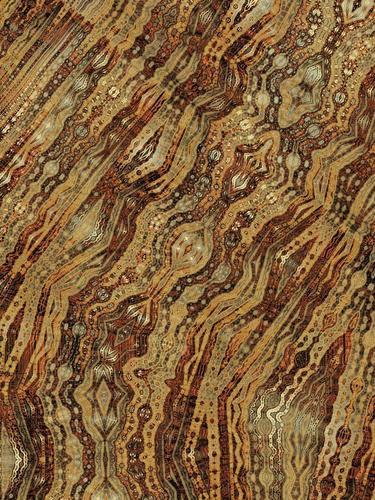 What the War Lost by Timemit

Top left area is my favorite in this one, but the whole thing is a treasure trove of fractal gems.  You see?  You don’t need to know anything about “Ducks” to spot it instantly.  There’s the theory of Ducks and the practice of Ducks.  Do you see any of the “self-similarity” or boring repetition of the old time fractals here?  Ducks is usually a wonderland of shape and color but this one by Timemit is an exceptionally good example. 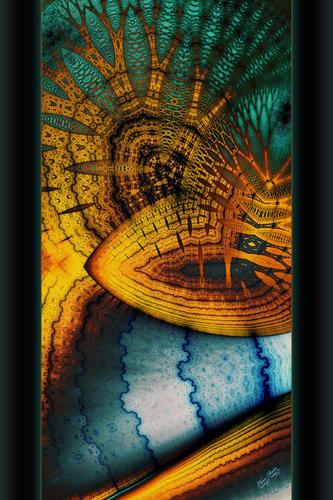 Since I’m on the topic of Ducks, here’s one by the (allegedly) Ducks Master, Misterxz.  This one is a fantastic image on it’s own right but especially as an example of the Duck-ian method.  It doesn’t really look “fractal” at all, except, I guess for the tree things at the top and the Koch snowflake things near the bottom…  I guess what makes it new and exciting is that there’s so much variety in what is a formula generated image.  Ducks is a whole new world and Misterxz’s image here makes that pretty obvious.  Ducks adds something categorically new to fractal graphics even if it’s not a huge break-though in fractal theory. 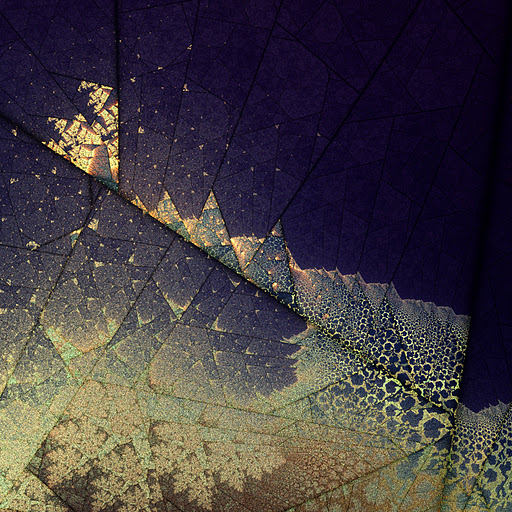 Dan’s in a rendering category all his own.  He manages to find really weird stuff and capture it in an eye-catching way.  This one is actually about a year old (Dec. 2010) so I must have missed it or something last time I checked out his Picasa Web Album Ultrameta gallery.  Dan’s galleries are a voyage into the fractal unknown.  You can’t view stuff like this and not want to grab your own “ship” and sail off yourself.  Sometimes the renders are rough but that just seems to add to the “natural” authenticity and archaeological atmosphere of Dan’s collection.  Ultrameta is an unexplored ancient tomb filled with intriguing artifacts that decorate its ghostly walls. 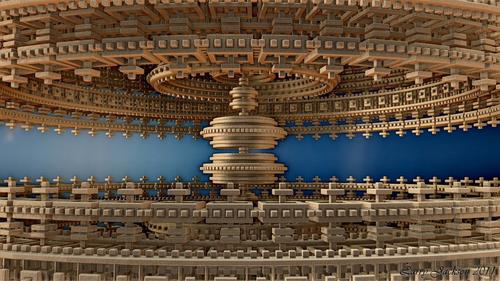 Maybe this one isn’t so strangely rendered but it’s got a unique look to it.  It’s just so perfect and exact and yet still lively and interesting.  I like how the blue background seems to “stick” to the subject –or is that just an effect of the unsharp-mask?  Actionjack52 has some other very nice images but in keeping with my offbeat theme let’s just look at his Deviant Art avatar:

A marvel of graphical engineering.  Just 5 animated gif frames for file size 6.92 kb!  I can’t stop staring at it.  Where does all that energy come from?  Doesn’t he ever need to rest? 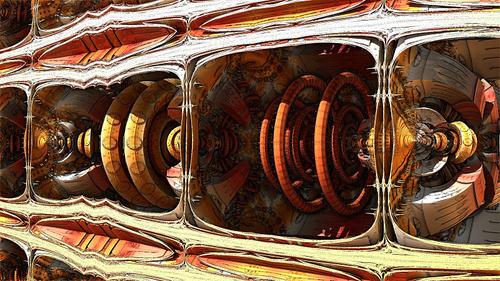 A delightful accident?  Incomplete rendering?  It’s a Mandelbulb 3D image that’s come out looking like an old Victorian hand tinted engraving.  The actual structures and underlying parameters aren’t all that unusual, but I’ve never seen anything quite like this.   Sometimes I think fractal artists try to make things look too good and they miss out on a lot of cool looking oddball renderings (and oddball fans). 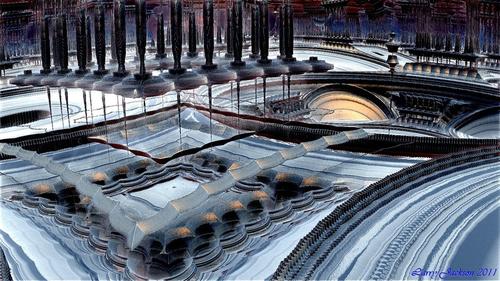 Would you believe it?  This foggy, frosty image is also by Actionjack52 who made the ultra crisp wheel up above.  Here’s a good example of how the stranger renderings can really create innovative stuff; it’s resulted in this very panoramic “winter” landscape.  The curved “road” in the bottom right almost seems to exhibit tire tracks in the packed snow.  Smoke drifting up from chimneys.  Full moon lighting up the snow…  Is this the Hunters in the Snow of our fractal times? 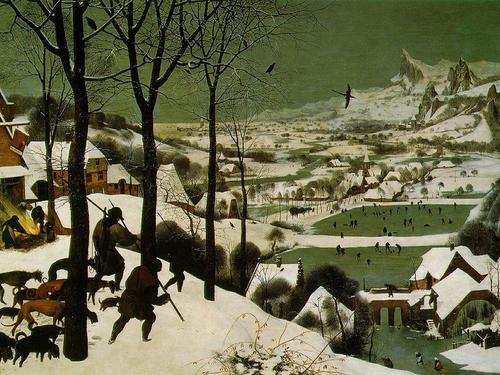 Hunters in the Snow by Pieter Bruegel (1565)

It ought to be titled: Dogs in the Snow.   Why so many dogs to go hunting?  I guess if you don’t catch anything you can eat a dog instead.  Just say it’s rabbit.  This scene looks incredibly modern to me.  I must be getting old. 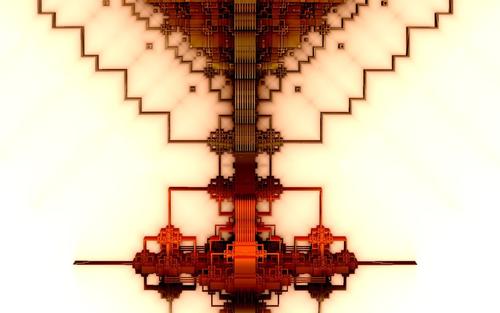 How can something so square look so exotic?  So many fractals display smooth curves and anything but sharp angles and simple lines but here is something fresh and refreshing.  I guess the color contributes a lot to the artistic impression here also.  It’s 3D and made in Mandelbulb 3D.  There’s some sort of wiry, metal rod parameter set floating around DA that makes things like this.  I suspect Madman’s (Fractalforums) Gluon Glitch video I reviewed uses a variation of it.  Dsynegrafix has added her own special touch to it though with unique, and colorful results. 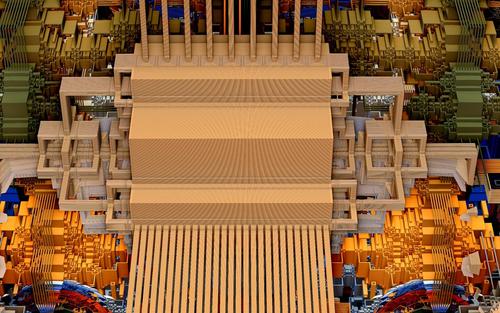 In Lieu of Circles 4 by Dsynegrafix

I love the orange/gold structures in the right and left foregrounds.  You really need to click on this one and view it full size to appreciate the “electronic” plastic-y feel to it.  Reminds me of Jock Cooper’s Mechanical series of images.  And Tron, the Disney movie, too; Electron Temple. 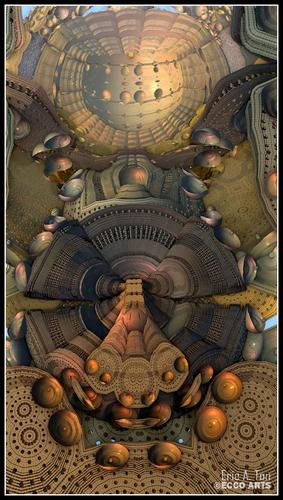 It’s almost 2D at the bottom and gives the image a collage look.  Coloring is really exceptional and also the variety of fractal structures.  There is a strong symmetrical structure to this and yet it’s not a simple mirror image but rather exhibits more of a natural, organic symmetry.  Click and look at the full size which is about 10 times larger and you’ll really be impressed with the professional look of this image by Eccoton.  But then Eccoton, if you browse his gallery, you’ll see is a quite accomplished graphic artist of the hand drawn photoshop variety (the hard kind of art).  Perhaps he touched this one up?  Anyhow it sure looks polished and perfected.  “Mandelbulb 3D/Photoshop” the gallery page says.  Nice combination.  I keep thinking he’s cheated a whole lot in making this image; it’s just too good. 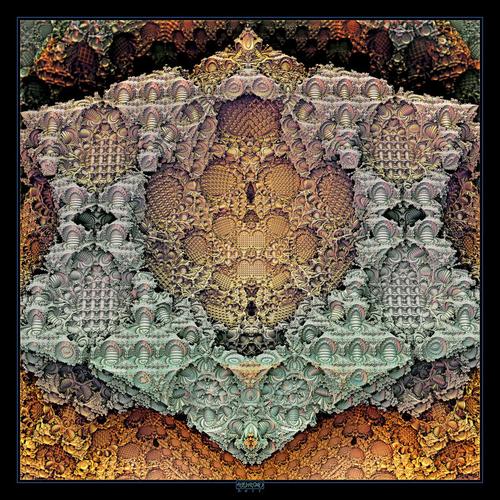 Nobody makes these sorts of golden renders like Mehrdadart does.  The classic black frame, as often abused as it is used, actually looks nice with an image like this.  There’s so many metalic colors in this image it’s almost suitable as a test image for color calibration.  If you like this one you’ll like a lot of Mehrdadart’s other images.  He makes a lot of 3D fractals and always gives them that something extra in the way of rendering and coloring that says “grandeur” if you will permit me to speak in the language d’art. 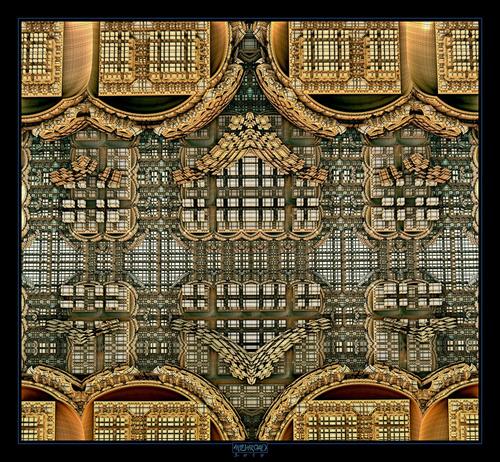 Sunrise in China by Mehrdadart

They look like windows.  The full size is much more impressive.  As the artist says, “Try the full size, please!”  And the full-size is 1800 x 1665 (is that big enough for printing?).  This one is actually a year old and has that classic square mandelbox look.  But even still it’s got a unique, energetic quality to it that is not even close to its expiry date.  Nobody ever made something like this back in 2010 with the mandelbox. 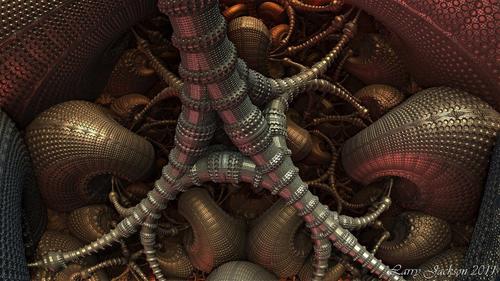 Actionjack52 again?  Well, this one’s not really offbeat rendering but it is a sort of extreme rendering because I’ve never seen such hyper-machined metalic-a surfaces before.  This is the sort of thing many people will want to copy, I mean learn for themselves, that is.  I like the bird’s foot aspect to this.  One often sees resemblances to natural forms in fractal art, such as this bird’s foot structure, because, I assume, somewhere in the internal structure of natural things or in the DNA of living things are codes that result in fractal looking (natural) renderings.  A three toed foot is inherently stable.  Rhinos have them.  Of course they’re not birds.  Not even close.  They probably eat birds.  Could mutations occur through ingested DNA? 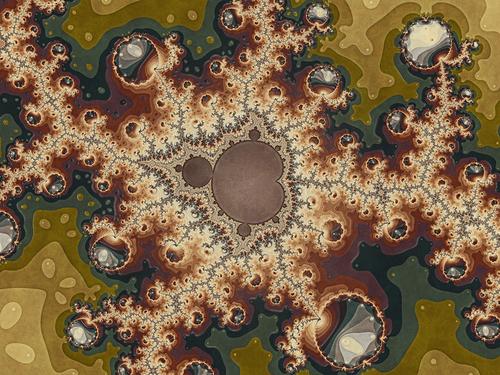 BMFAC 2011 Retro Collection winner?  Alright, forget I said that.  From the Fractalforums.com gallery page: “Description: Inkblot… (Postwork in PSE…)”.   (Inkblot Kaos?)  Some sort of edge-detection filter and maybe a texturing thing too to give the leathery look.  An old “trick” perhaps and not nearly as eye catching as the latest 3D rendering techniques but Jimmie has accentuated the simple shapes and patterning in this humble 2D fractal and made them interesting and resembling paper cut collages.  The sharply defined mandelbrot man in the center is elegant in a simple way.

Speaking of “papercuts”, here’s one recently unearthed from a storage room at the University of Michigan.  Created originally by a small art academy in southern China back in the early days of the Cultural Revolution and acquired by a UofM professor via a source in Hong Kong back in the early 70s and subsequently forgotten until just recently when someone cleaned the storage room: 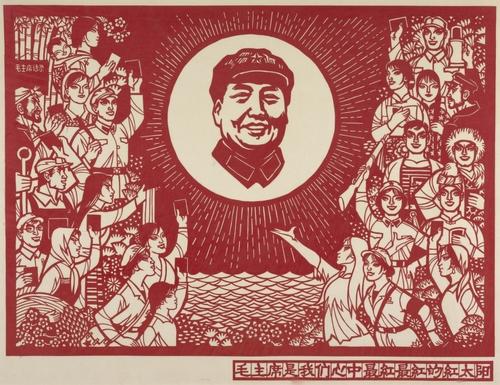 Translation: "Chairman Mao is the Reddest Sun in Our Hearts"

China’s a far-out kind of place.  These pictures are actually made of white cut-out paper pieces mounted on a red (very, very red) background.  Check out the whole collection of 15 if you find these sorts of things as bizarre and sci-fi-ish as I do.  The authors are unknown but they were certainly very skilled at this rather ancient art of chinese papercut artwork.  News release of Nov. 1, 2011 for the collection.  History is a kind of science fiction.

Let’s not end this posting with images of communist propaganda or with harsh, political speeches exhorting the fractal proletariat to Eliminate the Four Olds (The List; The Contest; The Program; The Leader).  Even I denounce myself as an enemy of fractal art and plead to be sent to the countryside for reeducation.  Here’s something dramatic and considerably less political by Mehrdadart: 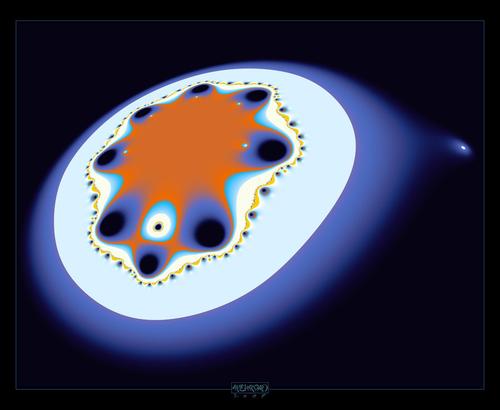 I like the simplicity to this one and how it accentuates the very simple fractal image.  It’s “dramatic” but not sentimental like most “dramatic” fractal images are.  It’s ironic that Mehrdadart who generally makes such rich, ornamental images could have produced something so different and yet equally engaging.  It’s the connection with the little white dot on the right hand edge that “leverages” the rest of the image.  Ultimately, fractal art is all about art, not fractals.

There’s more.  There always is.  Especially now that I’ve found a more effective way to browse the labyrinthine passages of Deviant Art.  My great discovery?  I check out people’s “favorites” section.  Oddly enough while fractal artists will endlessly promote heaps of their own garbage they are much more discerning when promoting the works of others.  All the DA artists I’ve featured here were found because someone else (who probably wasn’t featured here) had “faved” them.  It’s interesting how well the system works even though it’s routinely abused and manipulated –even as we speak!