By looking at all these weird fish images my hope is that you’ll stop seeing them as fish and start seeing them simply as objects of shape and color. 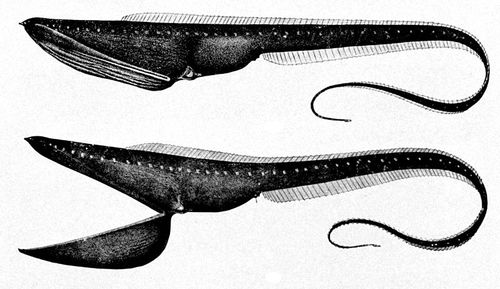 Eurypharynx_pelecanoides by Goode and Bean, 1896 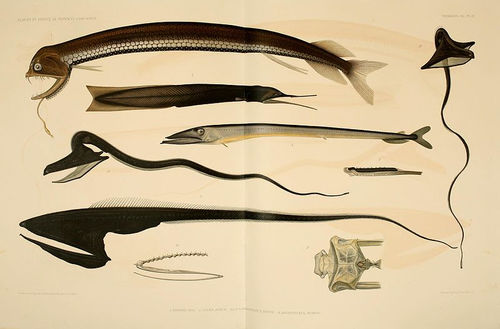 They have no need of being real, we can relate to them entirely as manifestations of shape and color.  Shape and color then, become real things, or rather, they become their “own reality”, their own little world with its own characteristics.  Which is ultimately what I’ve been saying about fractals: they have little in common with other things (like fish, Tim?) and like fish out of water (forgive the metaphor) they are a disappointment when flopped down at the feet of a land animal.  They can’t really be compared.  Underwater, of course, the land animals look equally out of place. 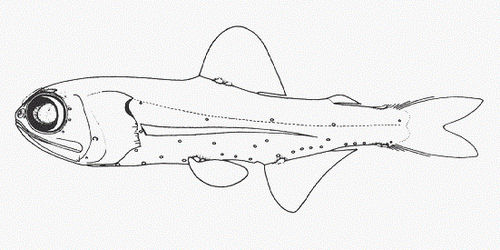 Challenge: imagine a deep sea fish you’ve never seen before.  It’s got eyes, a mouth, tail (an end) and some fin-like structures somewhere in between.  In your mind, add some colors, give it some brighter ones in places and some more subdued ones in others.  Change the numbers of it’s parts; two tails, one eye (or three).  Stretch some part of it and compress some other part.  Give it some new kind of pattern for fish scales, say car-keys or bottle caps, or sewing needles.  Lastly, change the outline of it, it’s profile.

Now look at that fish and ask yourself if it’s really something completely new or just a variation of other ones you’ve already seen?  It’s probably a variation, a synthesis of other images you’ve already seen, but a fractal program will come up with shapes and colors that you’d never imagine.  That’s the strength of fractal algorithms, they work in ways our human minds don’t.  But then that non-human “painter” doesn’t come up with the sorts of things that a person would paint.

Cryptosaras_couesii by Gilbert and Jordan, 1905 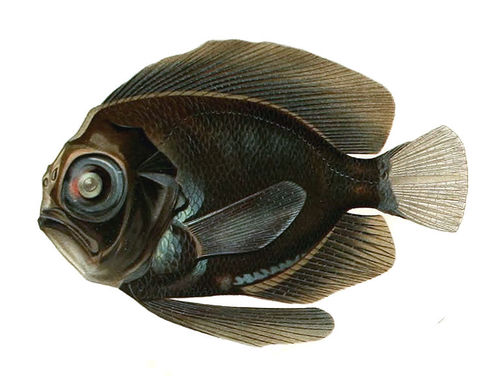 I just say that fractals are a completely different medium and that you’ll never find creatures from our human domain in theirs.  Just as you won’t find fish living on dry land.  They’re two different environments and they produce two different –but equally interesting– kinds of art work.  Interesting, though, for different reasons and in different ways.

The question is not, “Are fractals art?” but rather, “What kind of art are fractals?”  They’re not the kind of art that human artists make.  And for that reason they’ll never do what the works of Picasso, Dali, Da Vinci or other artists like that have done.

We make fractals with a different kind of machine and machinery; that’s the “medium” we work in.  We get a whole new category of results from working in that new medium.  Comparing it with other, more traditional mediums like painting or photography is a mistake because all the audience will think is, “Those aren’t good paintings” or “Those aren’t good photographs.”

But what I’m saying is that fractals aren’t a digital subset of those other visual art forms, they’re a whole new category because they’re made in a totally different medium.  If you regard fractals as something new and unconnected to any other preexisting art form or medium, I think you’ll be able to work with them much better and appreciate them much more and also to deal with any criticism they might receive better.  You no longer will have to defend fractals as paintings or photographs before painters and photographers.  Like the deep sea fish, fractals are strange new things to look at; fresh examples of shape and color that could never have been imagined.

Is that art?  Of course it’s art, but it’s not the kind of art that Picasso made or Ansel Adams made or that any human in the future will ever make.  Fractals as an art form are on a completely separate trajectory and path than the “human” or hand-made arts because where they come from and what forms them isn’t human or done with the hand.  The real winners in fractal art are those who are content with fractal art existing in a separate, alien domain.  The losers are those who want to be painters and photographers.  You can’t get there from here. 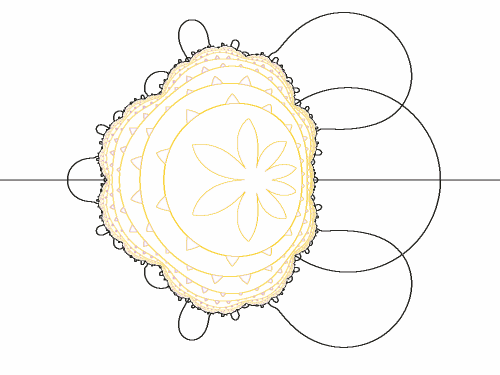 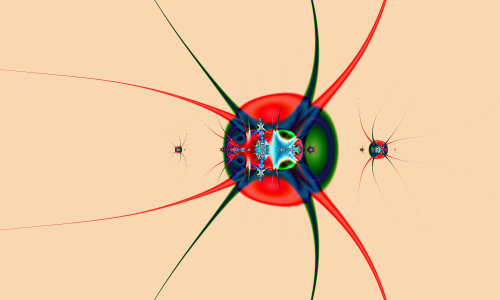 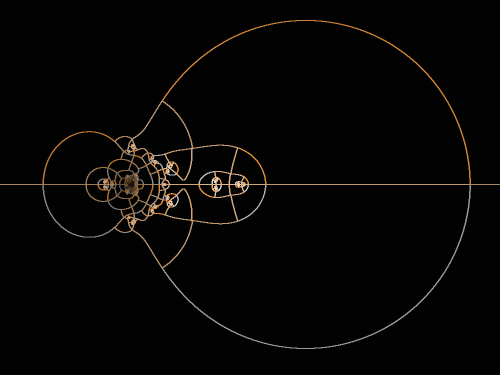 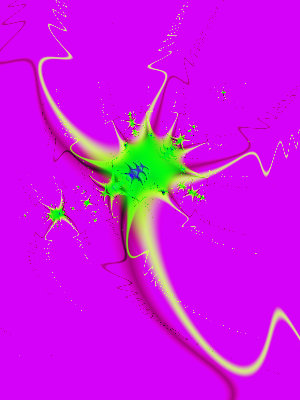 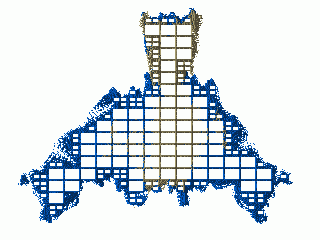 Made in Fractal Vizion 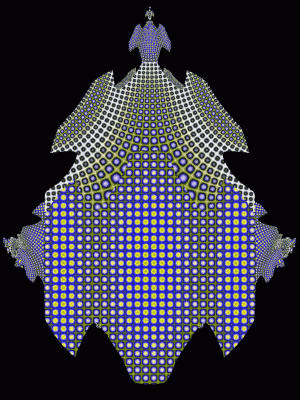 Fractal “objects” composed of little more than a shape with some simple coloring has been one of my favorite themes over the years.  Most of what I see other people making are much more complex “scenes” with very “deluxe” coloring.  But for me the ability of a program (and the formula it’s using) to create a variety of shapes is intensely interesting. 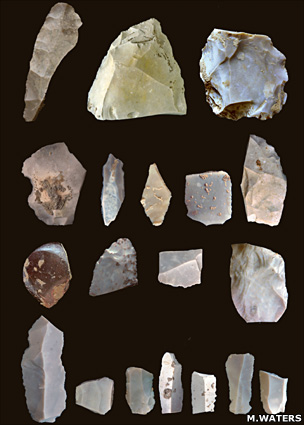 Is this art?  Cave-man tools?  Yes, it too is an art form of shape and color.  Shown together they are even more powerful as examples of mere shape and color.  I made some things in Terry Gintz’s quaternion program, Hydra.  All they had going for them was their shape and their coloring.  There was nothing else to the images.  Shape and color were their only characteristics.

Fractals (and rocks) are good at this kind of thing.  It’s a simple genre that works with only shape and color and so it’s not capable of doing the sophisticated things that something like sculpture, for instance, does.  There’s more to a Henry Moore sculpture than there is to those flint tools in the picture above.  On the other hand, I find the stone tools more attractive and pleasant to look at (and hey, probably more useful too).

Fractals are an interesting art form just like weird fish drawings and rock collections.  I wouldn’t say fractals are a lesser art form because they lack the capacity and capability for higher expression (above the level of a rock or fish).  They’re just a different kind of art. 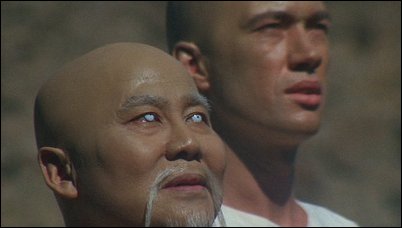 I can just see the old sage, Master Po, from the Kung Fu TV series saying to Kwai Chang:

“The greatest art is found in the common objects around us.  We see art in a painting because we look for it.  We do not see the art around us because we do not look for it.  Art is nothing but a frame.  It says, look!  Every man who looks is an artist.”

“But Master, you are blind.”

“Can you see what I see, Kwai Chang?”

“I do not know what you see, Master.”

“Well then, shut up about it!”