Another program from the extensive digital treasury of Terry Gintz.  Unlike Fractal Vizion which contains, metaphorically speaking, a full fractal orchestra, Hydra is a solo performance where the star is the quaternion, a richly talented Pavarotti of the fractal world who needs not even a piano for accompaniment. 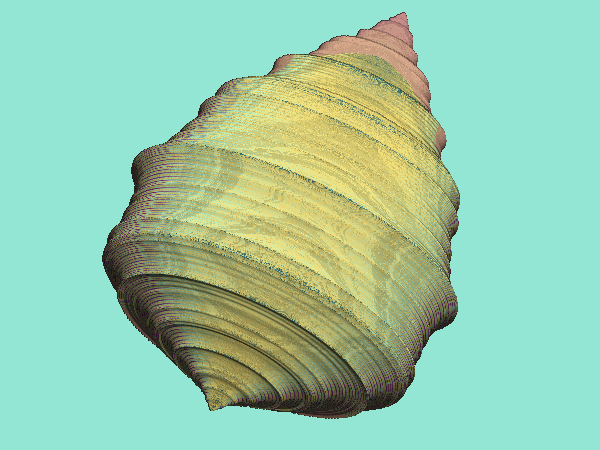 I mixed Time with Space...

Perhaps the label Michelangelo of the Fractal World would be better since quaternions are 3 dimensional –or more correctly, 4 dimensional– and therefore resemble sculptures more than paintings.  There’s been a lot of excitement lately about the (so-called) 3D mandelbrot, the Mandelbulb, but here’s something I find more visually exciting as much as it’s practically ancient as far as fractals and fractal art goes.

Quaternionic algebra was introduced by Irish mathematician Sir William Rowan Hamilton in 1843. However the use of quaternions to describe rigid body orientations has a much older history dating back to at least 1776 in the work of Euler.
Hamilton knew that the complex numbers could be viewed as points in a plane, and he was looking for a way to do the same for points in space. Points in space can be represented by their coordinates, which are triples of numbers, and for many years Hamilton had known how to add and multiply triples of numbers. But he had been stuck on the problem of division: He did not know how to take the quotient of two points in space.
The breakthrough finally came on Monday 16 October 1843 in Dublin, when Hamilton was on his way to the Royal Irish Academy where he was going to preside at a council meeting. While walking along the towpath of the Royal Canal with his wife, the concept behind quaternions was taking shape in his mind. Hamilton could not resist the impulse to carve the formulae for the quaternions i2 = j2 = k2 = ijk = -1 into the stone of Brougham Bridge as he passed by it.

Most fractal things (are quaternions fractals?) take their origin from the work of Benoit Mandelbrot in the latter part of the 20th century, but here’s something dating back to 1843 and in part to 1776.  Euler?  Yikes.  He was Ancient Greek or something, like Pythagoras and Copernicus.  Close enough.  Let’s get to the pictures.

Thanks to Mr. Gintz’s programming expertise all we have to do is push some buttons and play with the color palettes.  I’m not really sure what a quaternion is, but that just adds some magic to the recipe.  Here’s a quote that shows I’m not the only person a little disoriented by the concept of a quaternion:

Time is said to have only one dimension, and space to have three dimensions. […] The mathematical quaternion partakes of both these elements; in technical language it may be said to be “time plus space”, or “space plus time”: and in this sense it has, or at least involves a reference to, four dimensions. And how the One of Time, of Space the Three, Might in the Chain of Symbols girdled be.” — William Rowan Hamilton (Quoted in R.P. Graves, “Life of Sir William Rowan Hamilton”).

Actually, that helps a bit: “a reference to four dimensions”.  It’s got four numbers instead of three.  Like a tricycle with a steering wheel.  Hypernion, on the other hand, doesn’t even bring up a page on the Wikipedia and a Google search for it just suggests that I’ve made a spelling mistake.  Anyhow, on to the pictures.  Or videos, rather…

I did a video capture to show you the interesting way in which they’re made.  The color gradient silhouette is just a draft of the final image, but sometimes that temporary image has interesting qualities of it’s own.  There’s not a whole lot of animation really, just a slow revealing of the silhouette, so for simplicity and better image quality I saved a few silhouettes to compare with the final images.  Just like with Fractal Vizion’s L-system and Fractal Landscape creation, Hydra’s quaternion images have an extra dimension to them, that being the cool way in which they’re produced. 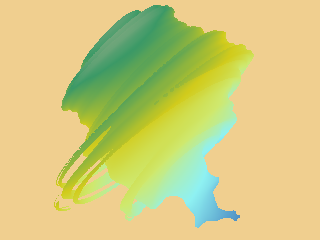 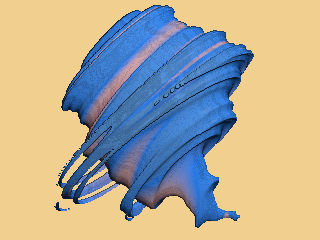 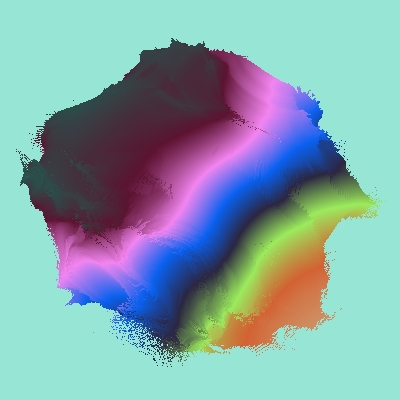 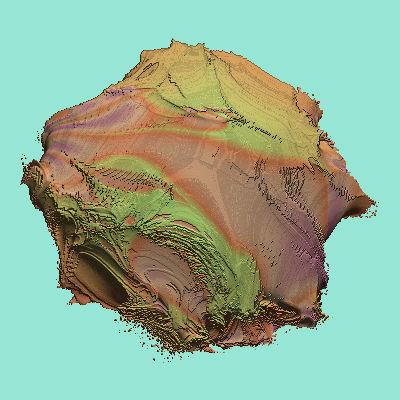 Here’s a few more to give you an idea of what the program can do.  I should mention that Hydra comes with a nice Help file but that I didn’t look at it until after I’d made all these images.  The program is pretty straightforward and hides the complexity of quaternion creation behind a couple of menus with easy to chose options.  Another nice touch is the addition of a random generation button which seems to be a trademark of Terry Gintz’s programs.  He really makes it easy for you to get started right away and then to start experimenting.  That’s the kind of algorithmic art programming that I like.  These next two are Hypernions. 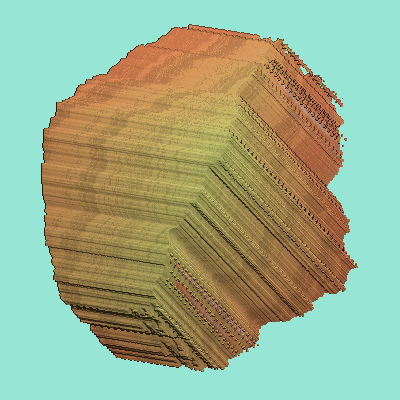 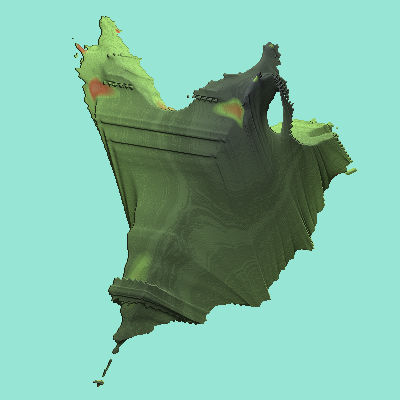 The hypernions have squarish characteristics

The coloring is great to work with.  Open the palette editor and just click on the random palette button.  After that there’s a few simple adjustments you can make to alter the palette.  The images you see here are custom palettes I made this way.  The whole thing is pretty intuitive.  Not all fractal programs are this easy to use.  Here’s my two palettes if you’re interested in trying them out in the program: bluewrap.pqz and yellow-clay.pqz 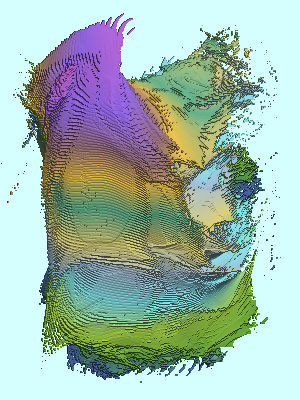 I think it's map of North America 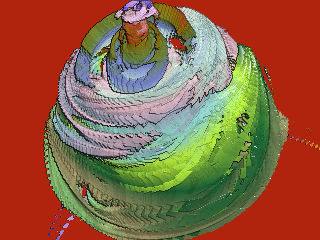 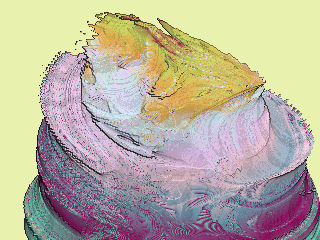 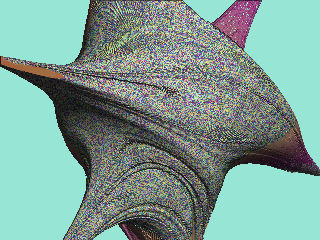 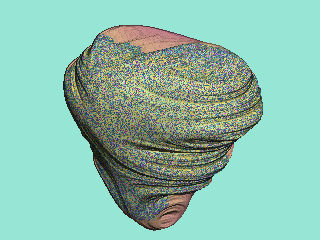 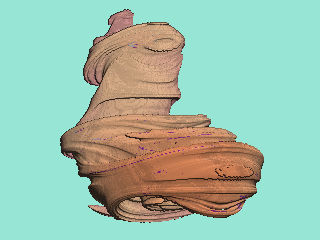 This one looks rather fractal and very lifelike. Reminds me of the wind carved stone formations in the Southwest U.S. 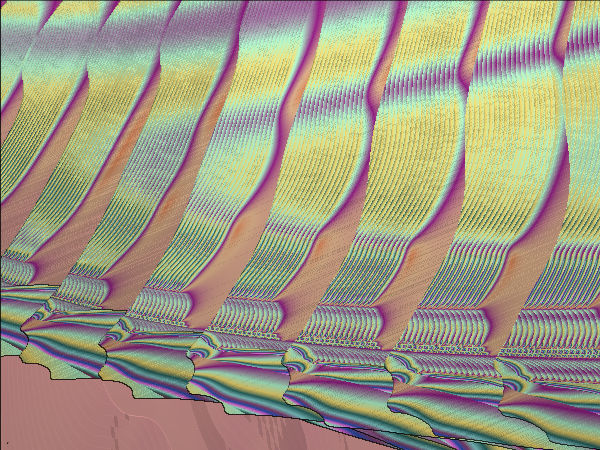 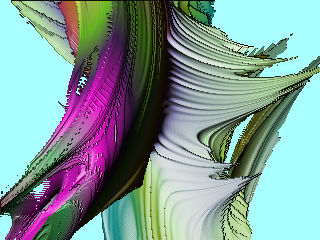 Some experimenting. Hydra does very nice texturing. They really are like sculptures. 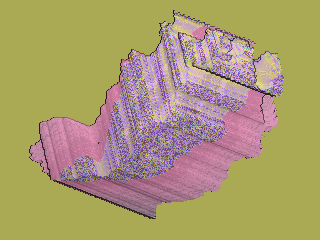 Different palette. Hypernion formula. Whatever that is. 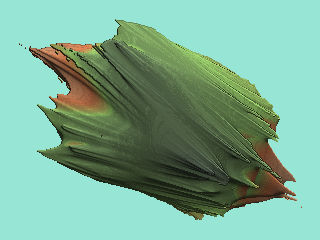 Just a nice rock to add to the collection 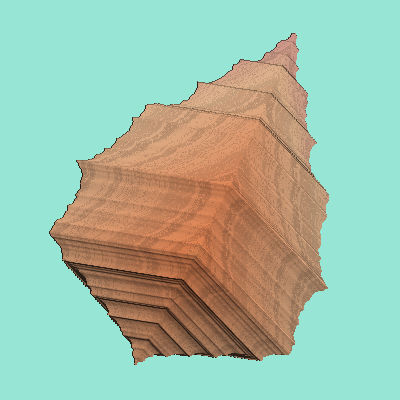 Hypernion. A square version of the image from the start of this blog posting. 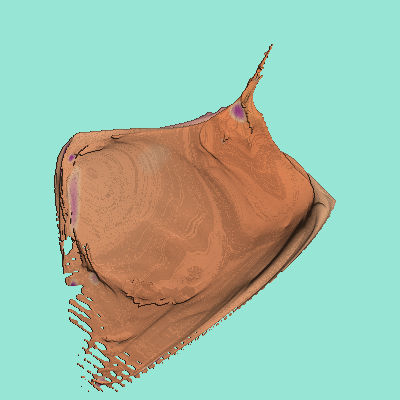 I find these clay constructions quite intriguing and I want to try out every formula and its variations. That's how I found this one.

Well, what else is there to say or show?  You can rotate the quaternions just like any other kind of sculpture and view them from different angles, lighting, surface texture and other variable characteristics.  It makes Ice Cream and Islands; Bubble Gum of the Gods; Brush Stroke Drafts and something new that I’ve termed computoids after the word asteriods in the sense of exotic computer made rocks.  Perhaps you have to be a bit of a rock collector to really enjoy this program.  It’s got a real natural style to what it does.  And style is what I think is very important in fractal art and algorithmic art programs in general.  Hydra produces imagery that is visually appealing.  There’s other programs that can render the complex formulas you find in Hydra, but they don’t render them in the same graphically appealing ways as Hydra does.  Great programs like this take more than just technical talent to make they take artistic talent as well.  There’s a lot of artistry that programmers like Terry Gintz put into programs like Hydra.  That’s why it’s so easy for people like me who just push buttons to make interesting stuff with them.  There’s an awful lot of power in those buttons.

One thought on “Hydra: Sculptures from the 4th Dimension”