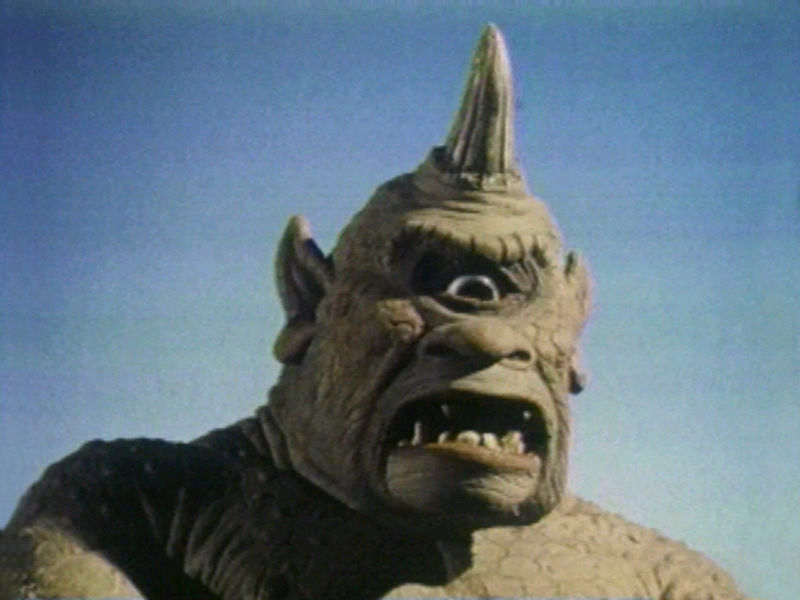 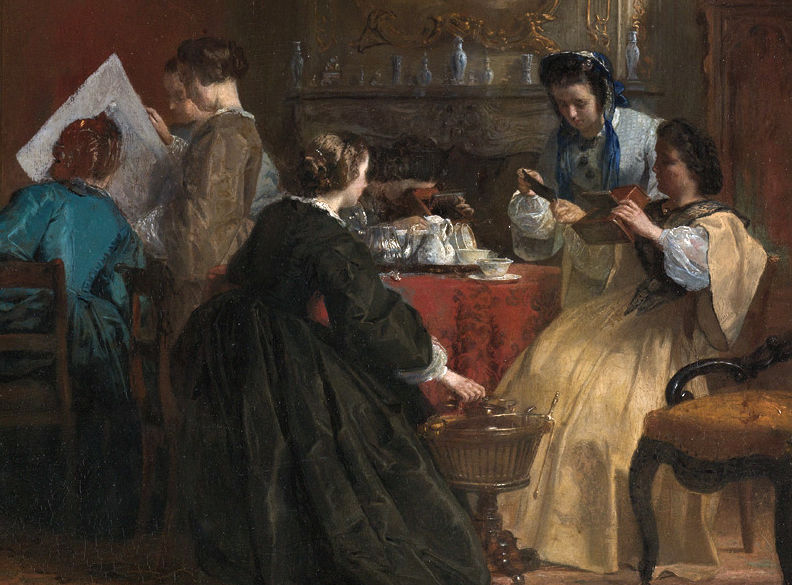 How old is 3D imagery?

In case you’re wondering, and you’re also stupid, 3D imagery has been around as long as humans have had two eyes.  It’s pretty common actually and goes under the generic title: see-ing.

In fact, if you think about it, the usual flat, 2D kind of imagery seen in most artwork, like the two above, is actually something of an abstraction and employs all sorts of technical tricks to give the impression of natural depth in an unnaturally flat medium; 3D imagery is natural imagery.

Natural?  Yes, that’s what I’d say is the impression I get when I look at 3D stereograms and other 3D imagery: I feel like a doorway to a little world has opened up on my computer screen.  3D is more than just a cool trick, it’s virtual sculpture and a visual reality –it’s as real as real can look.

I mention this because you may have noticed that people who make this sort of artwork often become obsessed with it.  I think it’s that “little world” effect that fascinates them.  Even apparently mediocre images still contain that exciting substance that transforms anything flat into an eternally effervescing wonder.

My first encounter with artificial 3D imagery was the View-Master.  Peering into it’s tiny worlds, no matter how dumb or childish the subject matter, was intoxicating.  I remember that not everyone was like that when it came to the View-Master and so I suspect not everyone experiences the same thrill intensity when it comes to 3D stereo fractal art.

There’s a number of people making 3D stereo fractal images but the most prolific one I know of goes by the name Rathinagiri on Fractalforums.com.  According to his Flickr page, his full name is Subbiah Rathinagiri and he lives in southern India.  I first came across his work on Fractalforums.com (FFs) the place where true enthusiasts gather these days. 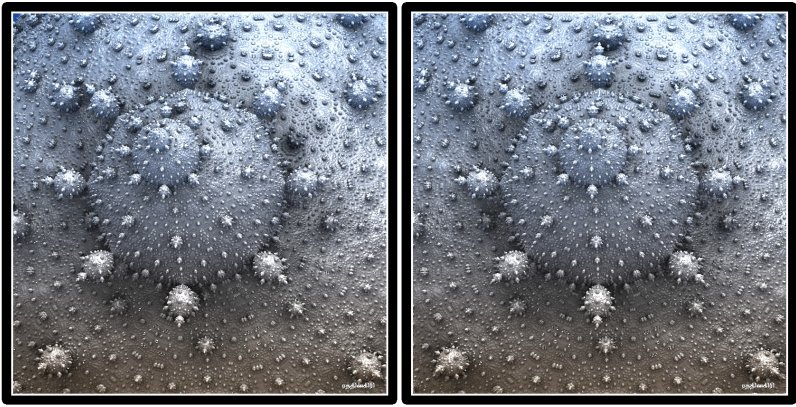 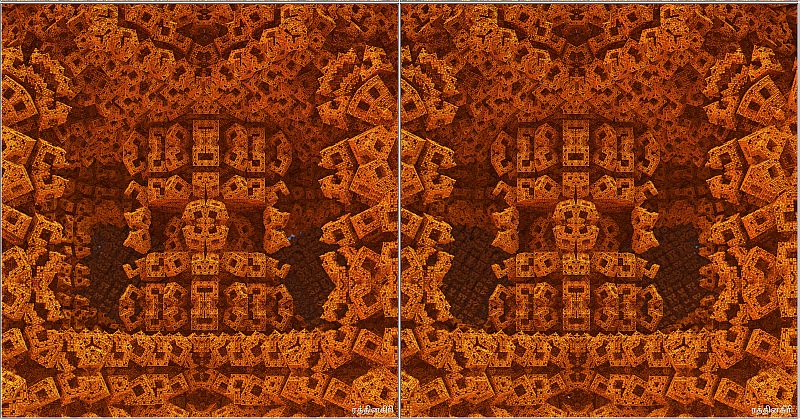 To view it, sit at a comfortable distance from your monitor and look at the dividing line between the images. Then hold your finger about halfway between your eyes and the screen so it appears just at the bottom of the image. Then look at your finger and slowly move it closer to your nose. This will cause you to cross your eyes. As your finger gets closer to your eyes, the left and right images will cross over and at some point you should see a stereoscopic view in your field of vision between the two images on the screen. It takes a little practice. Once you are able to see the stereo image, you should be able to hold your eyes in position and remove your finger.

Here’s an excellent image by Duncan using his own program, FractalWorks: 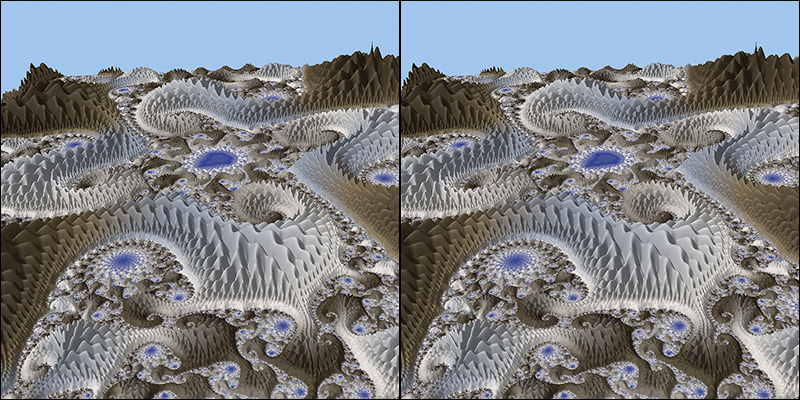 Note how natural the 3D effect is:  once you’ve got the image focused properly, cross-eyed, you can look all around in the image and the 3D effect never falters or is diminished.  Duncan says he prefers to make the red/cyan”anaglyph” type images as the cross-eyed ones tend to give him a headache.  But you need the special red/cyan 3D movie glasses to view those.  FractalWorks makes both and as you can see, it does it well.

If, however, you do have a set of red/cyan glasses, here’s a great one by Don Whitaker: 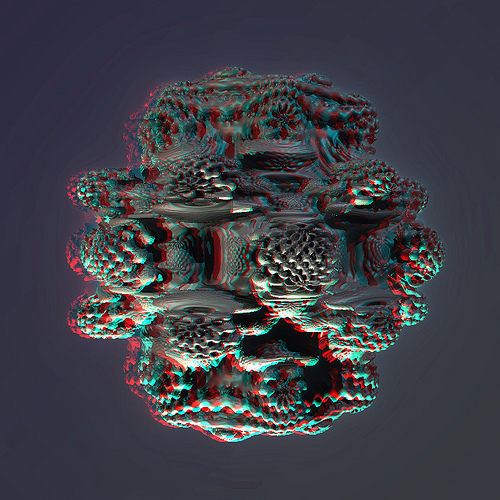 In case you can’t view it properly, it looks like glowing mandelbulb planet floating in sinister light in hole on your computer screen in a vintage 50s sci-fi style (where everything was glowing and sinister).  You know, if you’re really serious about fractal art these days you should have a set of 3D glasses beside your computer at all times.  Amazon.com sells them for a couple bucks.  “Tools of the trade” as they say in bankruptcy court.

How is it made?  Aircraft cameras create “stereo-pairs” by taking a picture of the ground below them with a single camera.  They then take a second picture just a few hundred feet afterwards.  The two images taken with a single camera from slightly different positions imitates the offsetting of your two eyes and the two aircraft positions become the left and right eyes you see with (Godzilla-vision).  The use of stereo glasses just makes it easier for each of your eyes to look exclusively at the single photo directly in front of them instead of doing the natural thing your eyes do, which is to intersect on a single point ahead of them and just look at one photo together.  Cross-eyed images are the same thing, just with a different name.  (Stereoscopy on the Wikipedia.)

Designed for a Stereoscope but works as a Cross-eye image: Boston Common (date uncertain) by John P. Soule (1827-1904) 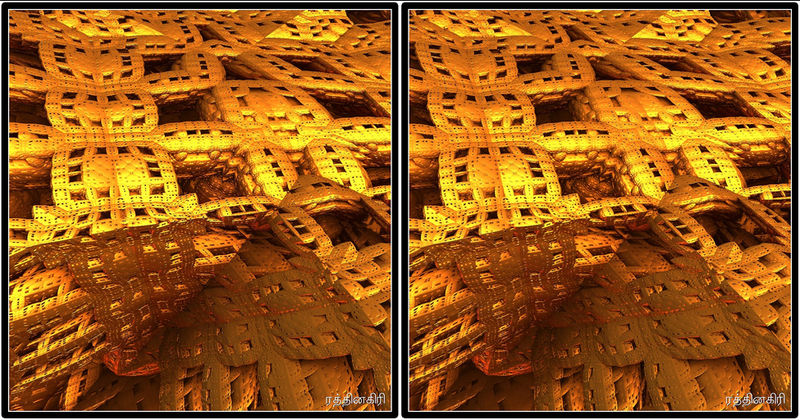 He’s got so many of these stereo images, and not just fractal ones, either, that I’m just showing a few that cover the range of imagery he has.  This one is a great example of a soft metallic texture.  It’s so much more impressive as a stereo image than a “one-eyed” one.  It looks as if the program (Jesse Dierk’s Mandelbulb 3D, I think) has actually made something real  and tangible. 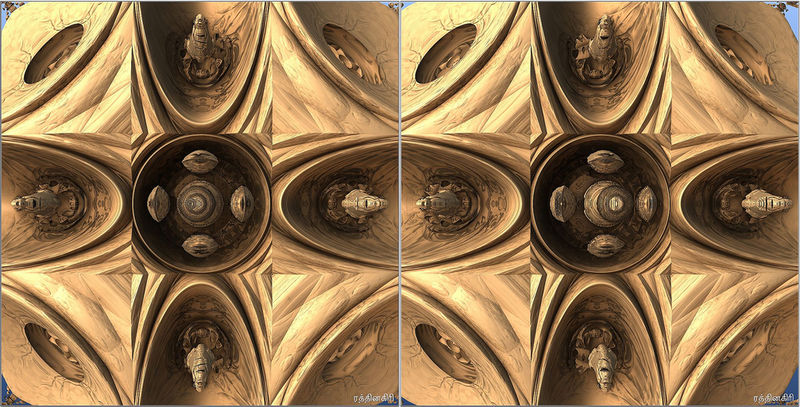 Carved plaster or stone is what I see in this one.  If there was a fractal temple, this is how it would look.  Watch out that you don’t poke your eye on the needle-like thing in the middle. 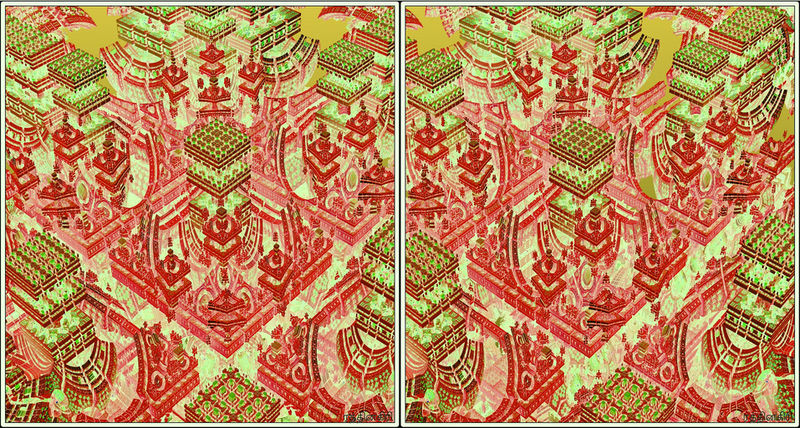 I like this one even as just a 2D image; the color, symmetry and design elements.  But of course, as a stereo image we can do more than just look at it, we can go there.  I find the mandelbox takes on a whole new dimension, no pun intended, when viewed in stereo vision.  Things that simply merged into the background are now floating and quite distinct.  I think we perceive the image differently when it’s a stereo pair.  Perhaps the effect is somewhat distracting and we want to go, “Wow!” at everything.  It’s certainly a whole new way of looking at fractal art, or any kind of art.  The stereo pair of Boston Common, above, has a life to it that it’s “one-eyed” version alone doesn’t have, although obviously good photography doesn’t have to be 3D. 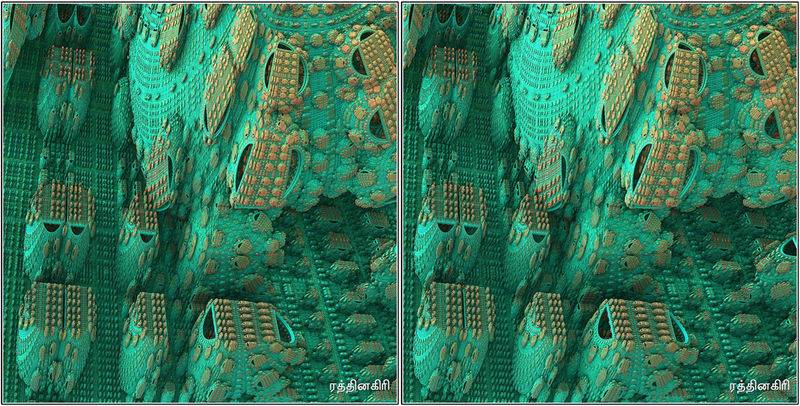 Every wonder what it would look like to go visit these “egg” covered mandelbox places?  Now you can.  Leave a trail of breadcrumbs to find your way back.

This one’s another cool image even in just 2D.  In it is displayed the great range of imagery produced by the mandelbox.  This really reminds me of the old ViewMaster panoramas where you could come back again and again to walk your eyes around in a little world.  3D stereo imagery can be a powerful medium when the subject matter is as interesting as it is here.

More (much more) of Rathinagiri’s 3D stereo work can be seen here on his Flickr page. 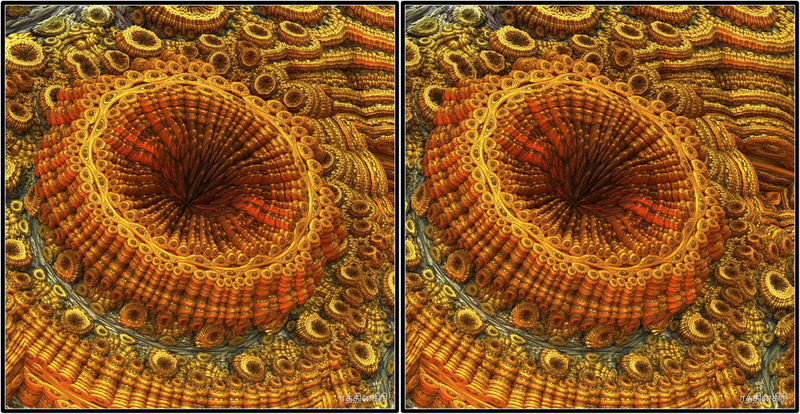 And a video!  A cross-eyed video.  You can do it.  Get cross-eyed first and then hit play.  [update: you might have to alter the “3D” settings that YouTube displays with to get “side by side” instead of “colored glasses” and a few other things…]

Illusion is the final frontier and nothing does it better than 3D stereo imagery.  My head is a spaceship and I go places.  At least that’s how it feels when viewing 3D stereo fractal art.  Sometimes it feels that way just walking around with two eyes.

3D stereo fractals are a natural extension of the new 3D fractal software.  I’ve just presented here some of the best examples that I’ve been able to find by Subbiah Rathinagiri, Duncan Champney and Don Whitaker.  I’m sure this is just the beginning, because as Rathinagiri’s work has showed, the results magnify and multiply the effect of the mandelbox imagery by allowing us to perceive it, literally, in a deeper and more profound way.