From time to time while browsing fractal art on the internet I’ve seen images that greatly impressed me and yet when subjecting them to a second, more critical evaluation, found myself unable to defend them as anything more significant than just eye-candy.  What all of these images had in common was exceptionally good color.

Upon reflection, over numerous years, I’ve come to the conclusion that color is an element of visual imagery that is best described as a fourth dimension because I think the role that color plays in the “architecture” of an image can be just as great as all the other fundamental parameters that, taken together, constitute the “length, width and depth” of an image.

There are artists who consistently make images that draw heavily on the subtle but effective properties of color.  Artists who concentrate on color are what I would describe as “visual musicians”.  I call them that because I don’t know how to relate what they do to what other artists do and like a great tune, it’s an undeniably pleasant thing.  It’s a wonderful thing, even if I don’t understand it.  Call it beauty, but I think  the term, beauty, is often just a word for when we run out of words.

In the digital realm color can easily seen as an independent aspect of an image because we can easily change it independently of everything else in the image.  Color is a global property and those are the kinds of properties that are most easily manipulated in computer graphics programs.  The little, detailed kinds of things you still have to work with by hand.  But you can change the entire color gradient or palette of a fractal or rotate it’s hue with just a few clicks in a graphics program.  It’s no wonder then that some artists chose to put the emphasis on color: digital tools give them “color-powers”.

Anyhow, nothing talks about color better than color itself; here’s a few images to illustrate the point: 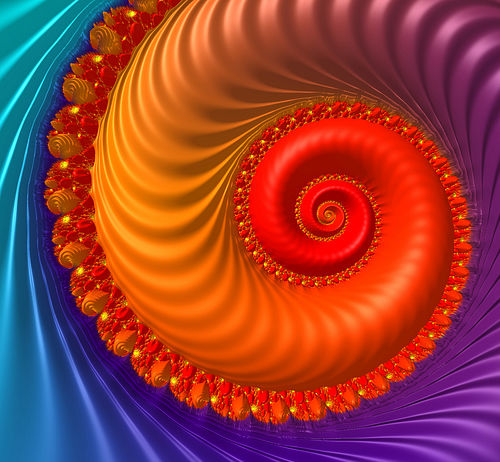 What better example could there be of the effect of color in fractal art than a super-rich color spiral like this.  Made by Schimkent (Flickr screen name for Kent Schimke) using Duncan Champney’s Mac program, FractalWorks.  The turning of the spiral places colors that would otherwise be farther apart in the gradient/palette right beside each other.

How is this spiral different from the many Fractal Universe calendar spirals which I think I once said reminded me of patterns on disposable party plates?  Well, that’s the challenge of evaluating works “of the fourth dimension;” you just have to look at the image and see for yourself what the difference is. 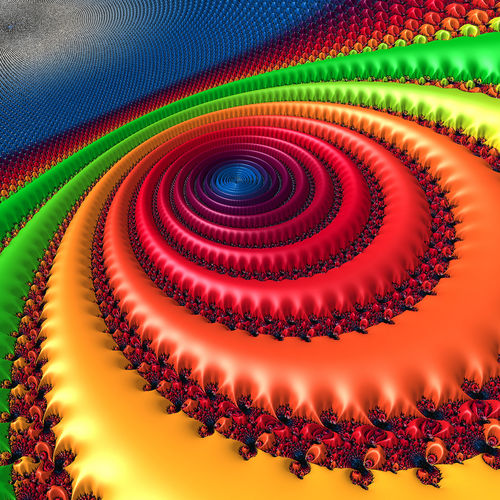 It’s all about that Blue in the top left corner.  The colored loops come close to it and challenge it, even holding Blue in their center.  The outcome is harmonious yet that subtle gray window screen texture shows that there’s more to Blue than they realize.

What I’ve chosen here are images whose color properties contribute enormously to the overall impression of the image; they’re examples of the effect of color.  They’re not just “nicely colored,” the coloring has a powerful effect on the rest of the image and magnifies the  it. 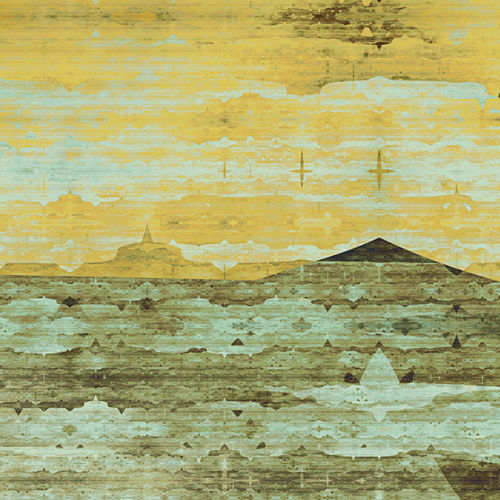 It’s not all about saturated color.  This one here by Samuel Monnier from his website, Algorithmic Worlds, shows how a less saturated, more subdued color can be just as expressive.  Of course there’s more to this image than just it’s subtle coloring, but the coloring compliments the quiet, ancient and weathered patterns in the ground and sky.  Every time I look at this I think of ancient Egypt and the Pyramids.  The wind carries away the sand, filling the sky with yellow dust and leaving bare the ancient workings underground. 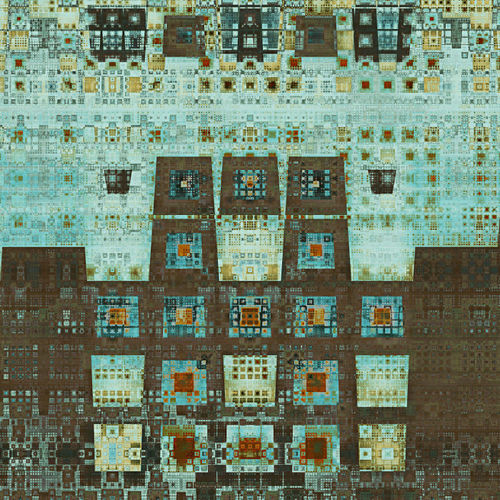 Such colored details.  Details are the hallmark of Samuel Monnier’s images which is why almost all of them are presented in zoomable fashion via a flash applet on his Algorithmic Worlds site, as we’ll see in the next one. 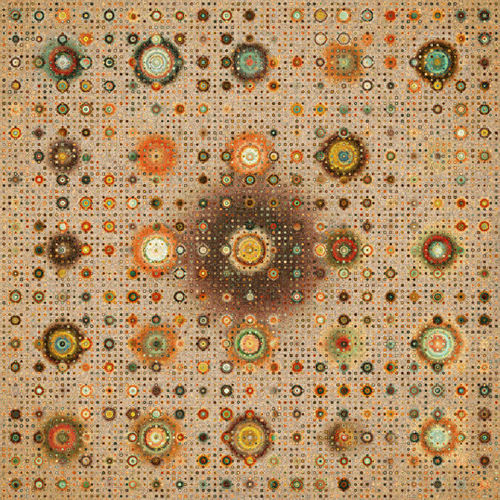 See the top left “planet?”.  In the image below I zoom into there and take a screenshot of the resulting detail.  This is a fabulous example of color as well as algorithmic color (he didn’t paint this by hand).  Every planet is different and even in the deepest zooms there’s still more planets below.  It’s a bit like real astronomy: the more closely you look at one thing, the more things you notice around it. 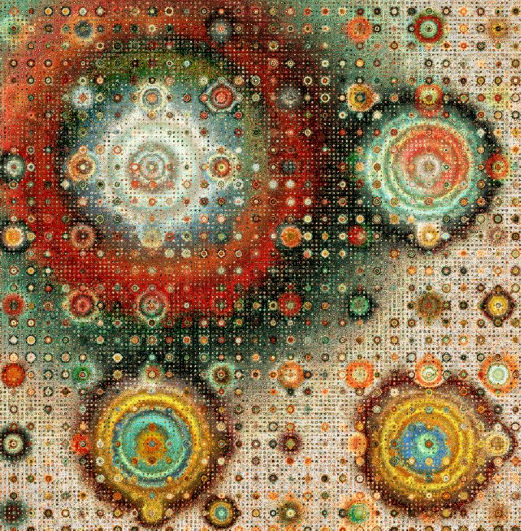 The colors are not so subdued in this detail as they are in the other images.  Compare this detail view with Kent Schimke’s spiral image shown at the very beginning.  They are quite different and yet each one thrives on color.  Monnier’s is a very detailed color while Schimke’s is broader, thicker, smoother color.  Of course, they’re made differently: Monnier’s uses his trademark “pattern-piling” while Schimke is using, I assume, a fractal formula rendered in FractalWorks with it’s exceptional, and very smooth, 3D rendering features. 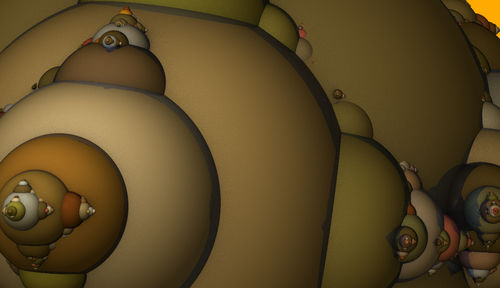 Another fine example of subdued coloring.  The structures in the image are quite plain and as the title suggests, are repetitive like feedback.  It’s color that takes the lead role in this image turning what would otherwise be a mere technical example of the features of the program Structure Synth into something much more creative and noteworthy. 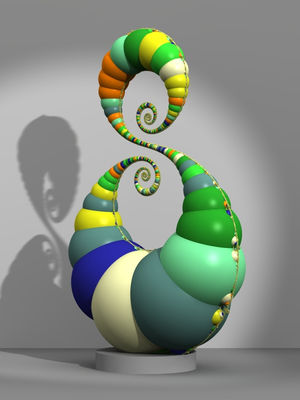 If you’re at all interested in color you could not possibly have missed the Kleinian images by Jos Leys, some of which are almost seven years old now.  It’s hard to imagine these things rendered in grayscale.  The above one is a special example, although typical of the way Jos uses color to compliment the Kleinian structures: it’s been designed in Ultra Fractal and then rendered in POV-Ray, a very sophisticated ray-tracing program.  The result looks like a photo of a real sculpture but is in fact just a very sophisticated digital rendering. 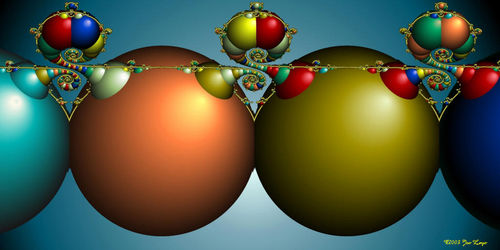 Here’s a perfect example of Jos Leys’ exquisite, jewellery-like, Indra’s Pearls images.  The color seems so natural and inseparable from the underlying mathematical “architecture.”  Could you adequately describe this image in words only without referring to the color? 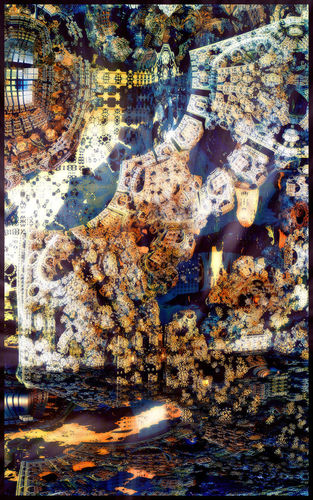 Keeping with my theme of the power of color, here’s something similar and yet quite different, too.  This image, I’m going to make a guess, was created by some very careful layering of a number of 3D mandelbulb/mandelbox images.  The result is not just a blending of the 3D structures but also a blending of the colors.  With the possible exception of Samuel Monnier’s “planet” image, these images by primitive mind (Deviant Art screen name) have what I’d say is the most sophisticated range of colors both in hue and saturation.  Look at the bottom of the one above and you’ll see in that little patch of “sunlight” in the bottom left saturated color while in the rest of the image it’s mostly more subdued colors and a very wide range of them. 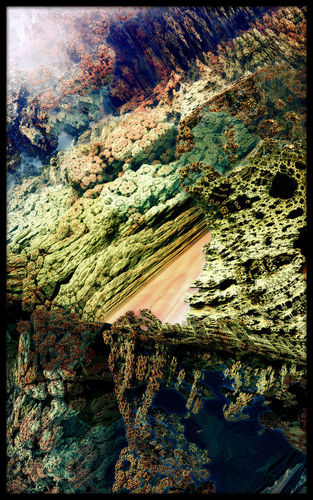 Under the sea by primitive mind (Deviant Art)

Images like these could not be saved as 256 color indexed pngs without changing them enormously or using complex dithering.  They simply have too many colors to do that very well.  They almost look like paintings, really.  And from a technical perspective, I’ve never seen mandelbulb/mandelbox images with such creative color.  Like all the others, if you click these you’ll see the larger size image on the site where I found it.

Is color a serious thing?  I guess it depends on what you think is serious.  Some think the life and death world of social and political issues is serious subject matter while others might find that a painful distraction from their study of water lilies. The work of some famous artists seems to revolve around careful choices of color.  Andy Warhol, in his famous silk-screen images experimented with unique color combinations.  Silk screening allows for this kind of experimentation just like computer graphics programs do; you can quickly see what different inks look like by switching them and making a new print. 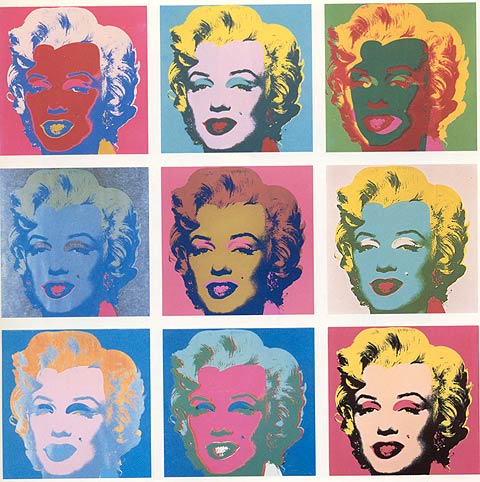 Marilyn, by Andy Warhol, who for many years could not walk without the aid of Color Crutches

Is there an art form that is nothing more than a language of shape and color?  Should we call it “Lego-land” or “Visual Philosophy?”  The graphically simple things like shape and color I believe can sometimes leave a very sophisticated impression in our mind.  Stephen Ferguson, the well-known fractal programmer, once made a profound statement –about a sphere– that it had infinite points of reflection.  The ultimate mirror.  Something to think about next time you look at “a shiny ball.”  Seriously.