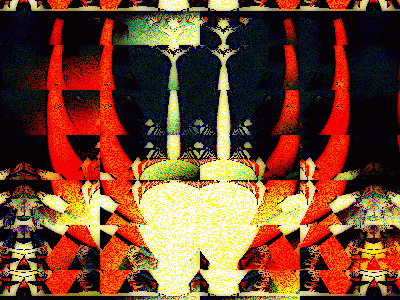 “So radically innovative are Ultra Fractal’s capabilities that they have literally redefined fractal art since the program’s debut.”
(From Ultrafractal.com)

It’s complicated. Believe me, it took me a few years to come to such a radical and harsh conclusion. I mean, what could be bad about a program that has been used to create fractal artwork with such popular and even commercial appeal? Is it simply bitterness, resentment, sour grapes, malice or some other petty feelings that have caused me to speak against this fractal colossus? Aren’t those the usual motives we’ve come to expect when we see someone “taking a swipe” at someone else’s favorite program?

Like everyone else, I am from time to time swayed by the deceptive, emotional impulses which usually leads to ugly behaviour. I’ve taken the time to consider the possibility that I’m being influenced by the selfish, petty things that usually initiate and maintain most discussions in the fractal world. For the record, I don’t think I have any personal bias against UF or anyone who uses it… but I expect most people will interpret that differently. Where you have art, you have opinions about art.

UF has produced some very graphically pleasing and professional looking artwork. It’s understandable that because of this many feel it belongs at the head of the fractal art parade, because that sort of artwork has a much wider, though shallower, appeal. It’s your best bet for attracting people’s attention and creating a favorable impression with them for fractal art. UF definitely has come to occupy a special place in the fractal art world, a place of preeminence and popularity that has fundamentally changed the environment around it. Not unlike the effect that Walmart’s success has had on the retailing industry in North America. 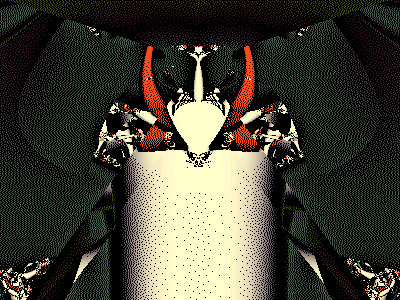 Strictly speaking, it’s not the program. It’s not the people who use the program, either. It’s this incredible ability that the program has to draw in almost everyone who has an interest in fractal art and keep them there, while the larger part of the genre lies either forgotten or undiscovered in its shadows.

That’s the Walmart effect I was referring to. Except, of course, there’s nothing predatory or monopolistic about UF, unlike Walmart, which engages in union busting tactics that haven’t been seen since the 1930’s (I have family who work for Walmart). UF on the other hand, achieved its popularity through good programming and design; smart trialware marketing; the high quality results of a few of its users; and through a large and very well organized user community.

Nothing wrong with any of that. In fact, the UF community is, in my opinion, the only really coherent fractal art group today. Which is what my point in all this is: fractal art has become Ultra Fractal-ized: One Brand – One Way, domesticated and homogeneous, losing it’s natural diversity by becoming cut off from the very thing which made it attractive to artists in the first place.

16 thoughts on “Has Ultra Fractal become the Walmart of fractal art?”