Cornelia Yoder was true to her words: the Fractal Universe Calendar 2011 is made up exclusively of her images and retains the traditional name although the publisher has skipped like a stone from Avalanche to Lang to Perfect Timing.  She has also kept up the time-worn tradition of adhering to that tested and true style that, in the words of one editor, “just works”.

Cornelia’s had quite an act to follow; over a decade of lush fractal bouquets, turned this way, turned that way, some with ribbons, some with none at all –but all of them radiating that, je ne sais quoi, that has made the Fractal Universe Calendar a cult favorite and engendered today a very cultish following despite more than a decade of progress in fractal art software and artistic style within the fractal art world.

But I sense the worshippers of this Fractal Universe Calendar style are coming to the end of their creative spiral.  I can see a good number of images amongst those published throughout the years that bear a close resemblance to each other.  Is this the coalescence of a new sub-genre? or the inevitable genetic collapse after so many years of inbreeding?

Some of the images to me look to be minor variations of the same parameters.  For instance: compare 2007-4 and 2009-7, counting from the left to the right.  Now there’s a twisted family tree –one too many “Julias” in that one!  Imagine having no in-laws.

Look carefully; can you spot any other slightly modified duplicates?  A little shift of the hue?  Something spun the other way?  Old tire, new tread? 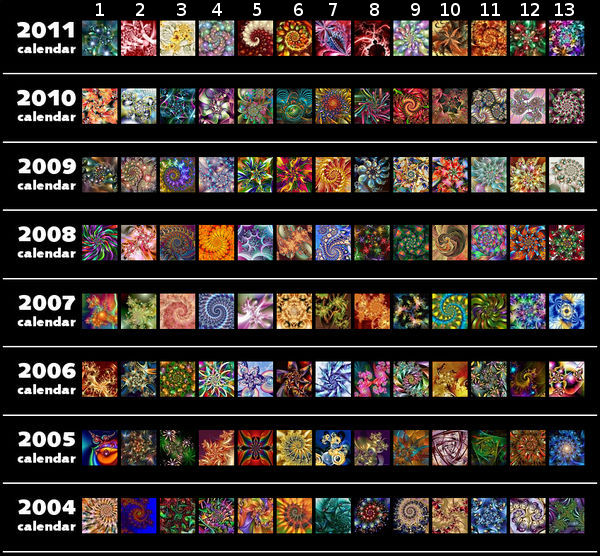