We’ve all heard of blur.  It’s one of those basic graphic effects that every graphics program, and even some fractal programs, automatically include.  Most of us though are probably more familiar with the sharpen effect which does the exact opposite which is to get rid of, or at least reduce, blur.

Few digital artists, and for that matter, few artists of any kind, would deliberately blur an image, especially an entire image.  Fewer still would do it again and again pursuing on a large scale such a passive, mild-mannered effect which is usually only employed on a small scale.

I should point out that the images here are not digital works.  They’re combination prints which are photographs made by combining negatives to make a single image.  It’s just like layering, in fact it is layering in it’s original, literal sense.

The artist who made all of these images is José Medina and they come from his Transitions series of combination prints made this year.  I found these images at cramart.ca and since they are all displayed in a flash applet along with the works of many other artists it’s impossible to link to them.  Strangely, they don’t appear anywhere else on the internet except as these small thumbnails in the flash applet; perhaps they are unique to Medina’s work at the CRAM collective.  I first saw the images in a Niagara Region (as in Niagara Falls) travel magazine and was immediately impressed with their strong artistic qualities and unique style.  Like the Mandelbox, they just looked so incredibly cool.  I Googled the artist’s name and found some more wondrous examples on the CRAM site.

CRAM was founded in February 2006 and is located in the heart of Niagara on the second floor of 24 James Street in downtown St. Catharines, Ontario, between Christopher’s Magazine & Smoke Shop and The Office Tap & Grill. The CRAMplex is home to Canada’s smallest art gallery, CRAM Press, and Marinko Jareb’s DJ Service, Fine Art & Design Studio & Collectible Designer Toy Shop.

CRAM Gallery showcases a collective of professional artists with ties to St. Catharines and Niagara who advocate regional ideas from outside metro and international centres.

CRAM Press was established as Canada’s smallest independent print workshop in 2009 by Co-Directors Tobey C. Anderson and Alan Flint with the installation of Harold Town’s old etching press. In August 2010 the CRAM Press was expanded to accommodate an American French Tool etching press and, while no longer Canada’s smallest print studio, it remains Niagara’s only print facility.

Like I said about the blur effect, it’s hardly new and exciting but these images are new and exciting.  Like Colombus, I think Medina just sailed a little further than the rest but it was sailing over the horizon.  Now, of course it all looks so simple because he’s shown us where we too can go.

Digital or not, we can all relate to work like this and learn from it.  Or just appreciate it, “stumbling in the neon glow” as Aristotle would say. 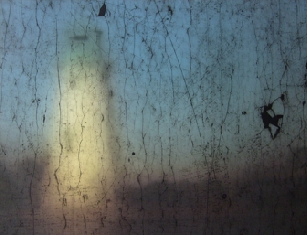 “Less is more.” You’ve heard that I’ll bet but here you’re actually seeing it.  That’s the minimalist trick.  On the other hand less can also be a lot less and even nothing, but done carefully the object in the image become a mystery (mist-ery, ha, ha,) and it’s no longer something we recognize, it’s something that may be, or something almost imaginary.  Blurring can be transformative –in a good way.

I assume this image above is a lighthouse but that’s mostly because the next image is obviously a lighthouse and most artists work with themes.  But it doesn’t matter because the object is interesting even if I can’t say for sure that it’s not a concrete parking barrier or a lawn ornament.  And that black crackly thing on the right is almost fractalish even though I suspect it was placed there deliberately to balance the composition which would otherwise be somewhat empty on that side.  I think the distant hills in the middle foreground are, ironically, more distinct than the top of the lighthouse.  And how about the way the lighthouse dissolves into the sky?  It’s almost like a detail view of an old renaissance oil painting with its subtle but careful features. 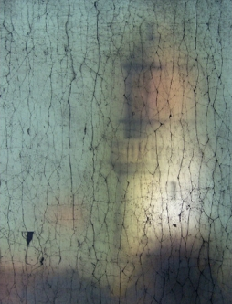 This one has it all: dream-like details; dissolving boundaries; ghost-like horizons; colors that drift across the spectrum; and a few smudgy mysteries.  I particularly like the little window halfway up the lighthouse below the balcony railings.  I think it’s been deliberately not obliterated.  Good artists cheat like that.  Photoshop filters never do.

Although the method used is composite printing, Medina’s images here use that particular method to achieve a strongly blurred style of image.  Other composite prints look like normal photographs, crisp and in focus.  They just combine features and imagery in the same way we layer images in a grpahics program.  But Medina’s composite prints are characterized by a heavily blurred artistic style and that’s the effect that impresses me the most with them.  You could say they’ve been post-processed in just the same way we would make a fractal image and blur it in a graphics program.  Although, of course, most of us wouldn’t blur a fractal, we’d sharpen it.  It might be worth trying the blur thing if we could get results like this. 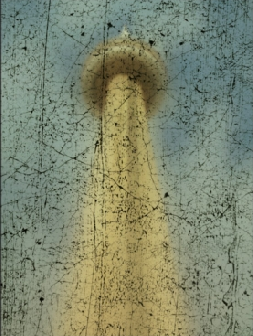 I’m guessing this is the CN Tower, Toronto’s great claim to fame for many years which has subsequently been overshadowed by even taller, free-standing, feats of engineering like the Burj Khalifa in Dubai.  But how many of those have been immortalized like this?  Yes, greater than that great icon is this new icon by Medina.  Towers of art will never be topped. 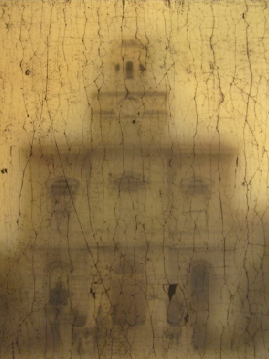 I don’t think a digital filter would produce such irregular blurring here.  In places you can make out brick work and in other places the edge of the building itself has dissolved away.  This is what I mean about the selective, hand-made blurring effect seen in these images.  The rooftops have been quite obviously, for lack of a better word, gaussian blurred as we know in the digital world.  I didn’t really notice it until I looked more closely at the edges of the building.  Or maybe it just came out this way? 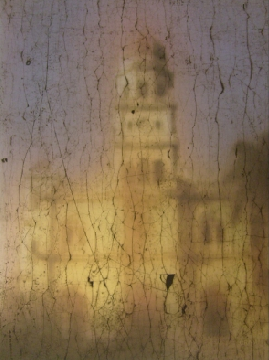 A word about Craquelure.  Not the French candy, the cracking that old, hundreds of years old, paint in paintings do.  It gives an old, worn look which in this case accentuates the blurred, renaissance, faded, dissolving look.  I’m sure there’s a filter that does that too, but here there are some finer touches to it.  Note the dark “crack” in the lower mid section of this one and the 3D appearance to the other cracks.  It’s subtle, but then blurring is all about subtlety.  Subtle subtlety. 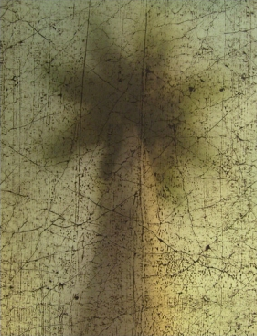 Well done blurring is hypnagogic.  We are seeing the image as it slips away into sleep.  But no, it’s us, the viewer who is dissolving away.  I say, “Well done blurring” because blurring is a tricky thing really.  It’s hard to straddle that ideal twilight zone of majestic illusion without falling off completely into total attenuation and pigmentary nothingness and at the same time not playing it so safe that we stay well within the everyday realm of legibility.  Blurring is a fine art and I show these images here because I think they’re the finest examples of it I’ve seen.

Is this image a palm tree?  Maybe.  But the regularity of the branches suggest something possibly mechanical.  Maybe an amusement park ride that spins around with swings hanging from it’s arms.  The swings are outside the picture and the chains that connect them are too small and thread-like to show up.  Look more closely and I think I see a roundish trunk and the slight presence of sunlight coming from the right hand side.  Some wind too.  Voices?  Sounds?  Asleep again… 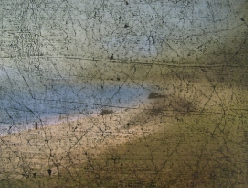 I think blur is a kind of minimalism; it’s the transition zone between the usual, detail-driven and intelligent focused artwork that most artists make (and most viewers look for) and the incoherence of things like painting with white paint on a white canvas.  We can make out water and by deduction coast, possibly sand, a sandy beach, and a few dark objects along it, possibly rocks which would suggest those dark areas inland are trees and that this is a remote or more remote place or is that green haze in the right foreground a well-mowed lawn in a public park? 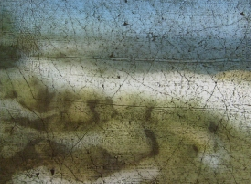 “Stumblin’ in the neon glow.”  That’s the sort of thing I mean.  And “purple haze” is not too far off either.  They’d make great names for filters that do this.  Neither of the authors would object to the use of those titles, I’m sure.  Does Jim have email?  Or Jimi?  What?  Jim and Jimi?  That’s almost a verbal blur.  “Grasshopper!  Now do you see it?”  “I see nothing at all master!”  “Good, good.  You have done well, Grasshopper.”

Again, I see water and from water comes shore.  The strange shapes in the foreground are rocks and since they seem to clash with the shore I’d say they’re part of a breakwall or shore project to reduce erosion.  The trail in this urban project looks familiar and I’m thinking that maybe I’ve even been to this place.  Medina is based in St. Catharines which is only 2 hours from where I live and since he seems to have included a photo of the CN Tower it’s possible that he visited the city and took this photo at one of its many lakeside parks that are characterized by these urban garden-isms.  On the other hand, it could easily be Cuba.  Blurring gives anonymity to things and yet the result is we claim them as our own. 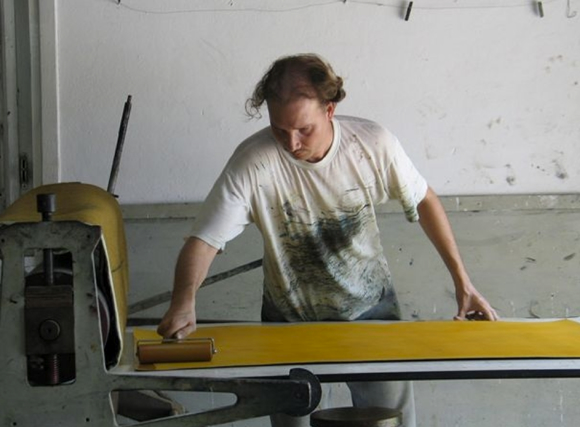 The Master and his Iron Photoshop, José Medina

Sure, it’s an Iron photoshop.  Just look at the roller in his hand.  I think there’s a roller tool in Photoshop.  I’ve never used Photoshop actually.  I’m guessing that it’s the same as the Gimp and it has a roller tool and a smudgy finger tool and of course, several kinds of blur effects.  Gaussian is nice, but it’s not as sophisticated as the blur effect in the images here that I suspect have been done by hand, selectively, more in some areas and less in others.  Of course you can do that too in a graphics program.  You’re just using numbers instead of using your hand.  Not as much fun as working with the Iron photoshop, but then you’re not working with zero levels of undo like they are in the Iron world.  (And when have you ever gotten your clothes stained with fractal ink?)

One thought on “Smudge-ism: Blurred to Perfection”