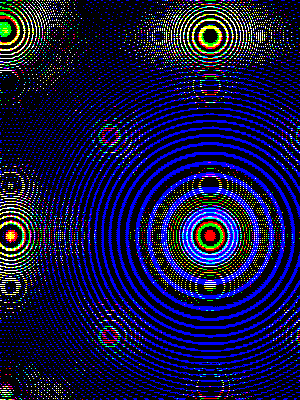 You know, post-processing can really mangle a decent, law-abiding fractal image and make it an almost unrecognizable, but strangely delightful, wreck. Some will never walk straight again. 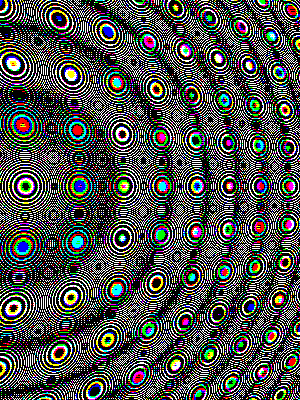 But when you start with an image that is almost entirely a product of the program’s filtering effect, and not quite a “fractal” image to start with, the results strain the already stretched categories of visual taxonomy, sowing the seeds of an impending visual collision, or shall we say, “Collisual” – intriguing arrangement of debris.

These were all originally made in Tierazon 2.7. Here’s a clean one that hasn’t had anything done to it. In fact it’s the original image the above one was made from. 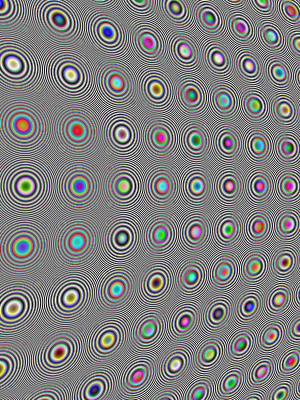 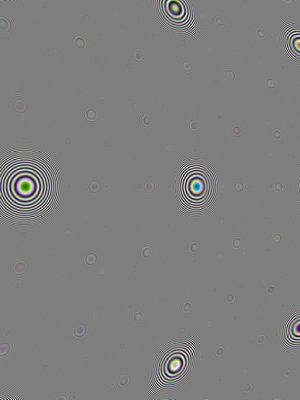 They’re alive. I should explain that.

This is rather Twilight-zonish, although I’m sure there’s a scientific explanation: The images keep changing.

When you see something interesting and zoom in on it, it’s gone when you get there. I think it’s because the image is created by a moire effect and the resolution of the image changes the resulting pattern of circles.

In fact, I wanted to call this series of images, “Monsieur Moire and the hypno-dots from the Atom Ray”, but it just didn’t have the same zip as stepping off on Saturn.

Well, that’s just the beginning. The really freaky thing is when you antialias one of these things (as you can see above). The resulting algorithmicolated picture transforms into something quite different; the dots are in different places and the colors have changed too. 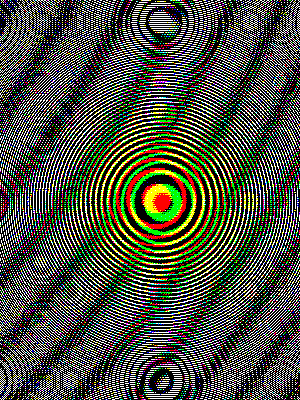 In an image viewer, when looking at the thumbnail, you see yet another variation of the image. What you see in fact, is a new image and you can’t go by the thumbnail to find what you’re looking for. In a strange and maybe existential way, the thumbnail is not the image and doesn’t even pretend to be. 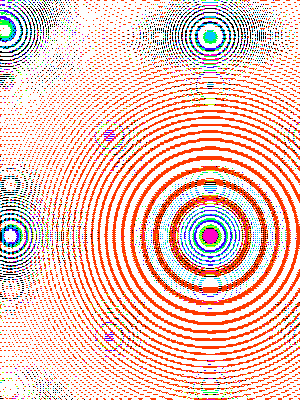 Perhaps they are “fractal” after all, as far as self similarity and endless resolution goes. What you see depends on how close you are to it and at what size you make it. Or maybe that has nothing to do with fractals.

They started off in Tierazon. Then they met me. And my machine. But their fractal identity can still be traced through their dental records.

Maybe all this is in my head.