What shower of insults and rotten tomatoes are provoked up by such a play on the expression, “Paint by Numbers”?  And yet, to those who know what galactic boundaries are quickly traversed by just a few (million) iterations of the simplest of fractal formulas, the phrase “Paint by Fractals” is nothing short of rocket-powered creativity.  For those of you who aren’t sure of what I’m getting at just look at the pictures.

~Click on images to view full-size on original sites~ 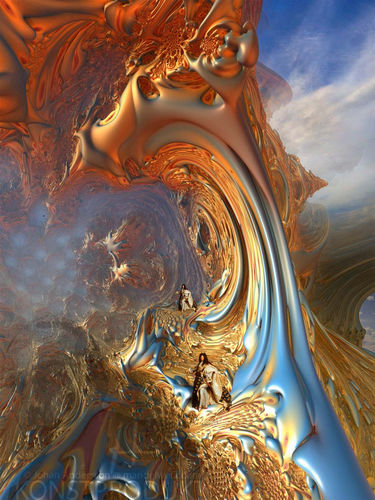 How does this one make me think of “painting”?  Although the elegant curves and ridges of the mandelbulb suggest a rich picture frame, what catches my eye and makes me say, “Son of da Vinci!” is the background imagery on the right-hand side, middle to top.  It’s the sort of painterly touch that one often sees in renaissance portraits like the Mona Lisa; misty, hazy panoramic landscape. 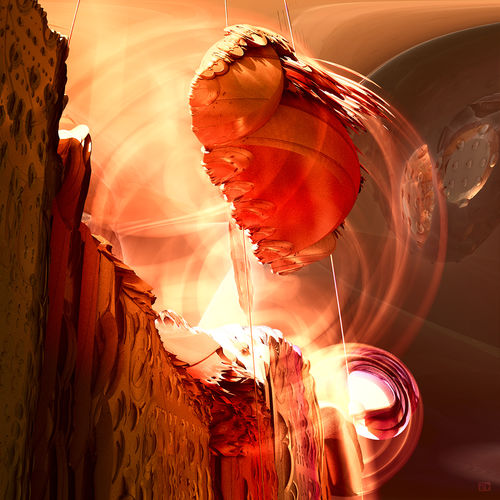 Maybe the “painterly” style is just the preference for subtle shading and the appearance of natural light.  I have no idea who Sitting Duck is.  I think he’s one of the many new names drawn into the Fractalforums.com orbit through their recent contest.  If so, then the contest has been a success.  This image reminds me of the many sci-fi fantasy paintings done by Frank Frazetta back when that sort of thing was popular, that is, before the advent of CGI when fantasy became reality.  I like the overexposed areas of bright light and of course the multiple shades of rusty brown that would have caused even Da Vinci to start using a bigger palette –the old-fashioned, non-indexed type.

For which of his paintings would Frank Frazetta have ever have written a description like this:

Truly, “Painting with Fractals” puts us in a completely different league.  And language group, too. 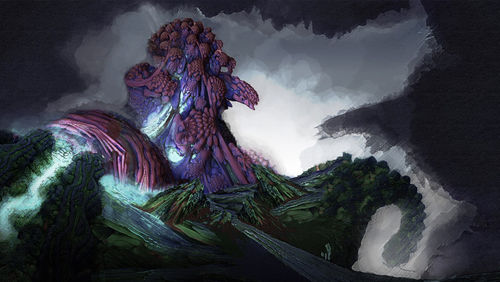 Eat your Veggies! by indavisual

This one caught my eye for what is probably the most important aspect of the painterly style for fractal art: creativity.  The painterly style challenges the opposing style of precise, slick rendering.  The painterly style is a reminder that art is a matter of impression and not precise, diagrammatic or photographic depiction.  We applaud the skill of painters when they paint something that evokes great thoughts and feelings, but when a talented painter paints a great photograph and imitates a camera, then who cares?

This one really shows how the distorting effects of whatever this guy did to this mandelbulb image can create something new and different where sticking to just the parameter settings of the program would yield something much more commonplace.  The painterly style could be described as semi-destructive or even sloppy.  The impressionist painters were described that way not because they actually were sloppy but because that’s how their work appeared when placed in the more established context of the (overly) realistic style of painting that came before them.  Compared to a photograph, even the Mona Lisa would look “smudgy.”  On it’s own, almost anyone can begin to see the artistry to such works as this one by indavisual (nice, multi-expressive screen name).

And that’s what fractal art as opposed to fractal science is all about:  artistry.  Of course it’s not too easy to define what is artistry and what is merely tech-nistry, but it’s worth loosening the bolts on one’s mind once in a while and seeing what comes from a more expanded visual range. 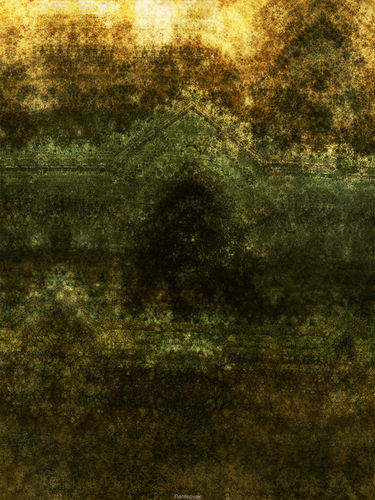 Rembrant-ish, but more than that.  The radiating details that draw our eyes into the smudgy shadows are beyond the sort of hypnagogic visions that Rembrant’s own shadowlands ever depicted.  Hypnagogic means just before you fall asleep.  And Turner, too.  This has all the subtle light shades and murky shallows of a Turner seascape with clouds, dying twilight and those things that only the eyes understand. 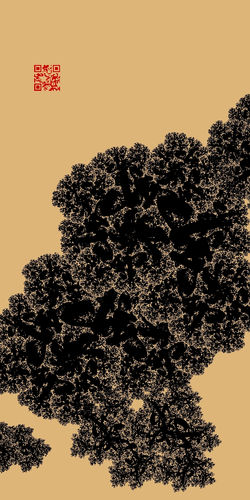 Description: http://www.flickr.com/photos/wackwang007/The calligraphy of Chinese characters as single elements, expressed the relationship between global and local, which is the calligraphy and fractal embodied.And I make it feel like Traditional Chinese painting as a form of expression.

This is not really a painterly example, strictly speaking, but the cellphone signature chop mark combined with the fractal cloud/mountain/trees structure does evoke a strong resemblance to Chinese art as the artist intended it to do tying it in closely to more traditional, non-digital imagery.  I missed the 2d barcode (red mark) at first and only on closer examination realized it wasn’t a traditional Chinese signature stamp. 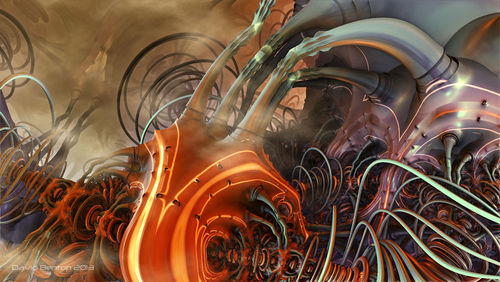 Smooth rendering and, once again, the smudgy-ness are the beginnings of painterly style.  Of course you still need an interesting image and composition and all those other serious art things.  The swirly cables/wires and steel parts forms a nice composition as well as something with a little bit of a realistic touch that allows us to begin to think we know what we’re looking at when in fact we’ve been drawn into something strange and other-worldly.  The cables in the bottom right are really fantastic.  They look quite hand drawn although I’m sure it’s just the careful rendering selection that makes them look that way.  This one looks like maybe it took some time to render.  Does an airbrush count as a painterly tool? 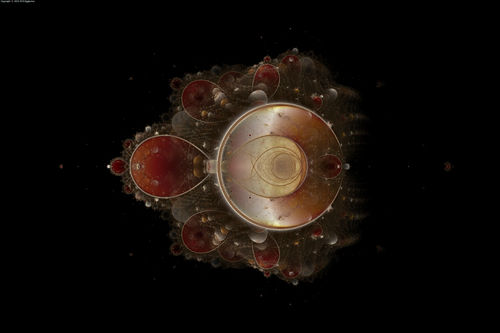 Orbit Mandelbrot No. 2 by element90

The Buddhabrot is always quite a painterly looking construction so one has to really do something special to produce an exceptionally painterly looking one and element90 has done that here.  It looks like parchment or skin or maybe thin aluminium.  But the reddish/burgundy shade which takes over in the smaller parts starts to suggest leather.  Or is it a recursive construction of old “pop-top” pop can tabs?  One can never be sure what the audience sees when looking at fractal art.  Just be glad someone is looking is all. 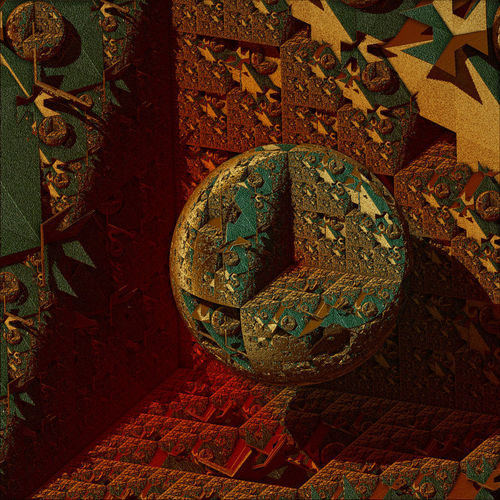 A detail from a painting by Escher?  Once again, subtle shading from various degrees of combinations and permutations of light –isn’t that 90% of what oil painting is? — light?  I like the combination of the sphere with the triangular shapes and squares.  One would almost think it was a deliberate attempt by the artist to suggest a round square or something alchemical like that when in fact it’s a deliberate output from the formula.  Of course the selection of this scene was the artist’s choice.  Selection is a big part of fractal art. 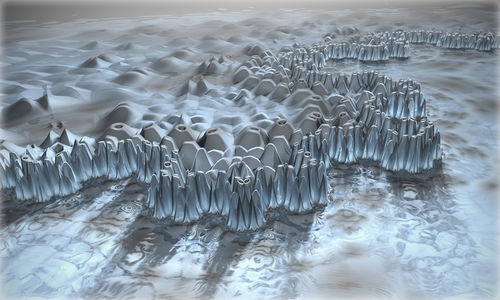 Cliffs of Antartica by Kali

This is exquisitely painterly.  Hard to believe it’s machine made, but then Kali has magical powers when it comes to working with machines like Fragmentarium.  If this was a painting it would be acrylic: bright, modern and powerful.  Colors da Vinci could only have dreamed of.  Although, I think one would detect some mixed-media accents in the form of sketched-in outlines and structural markings.  This could be pen and ink or pen and airbrush.  See what I mean about Kali’s sophisticated rendering methods? 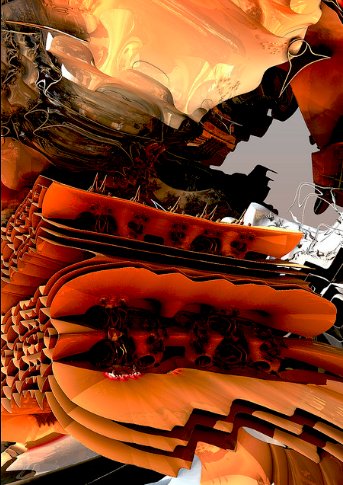 Ellenm1 has a rather interesting collection of mandelbulb images on Flickr.  This one I find to be the most painterly of the lot, however there’s a few other that remind me of Bosch and other famous painters not because of the lighting alone, but also because of the creative composition and un-precise, warped fractal imagery.  To me, this is a face, the bottom being a monstrous mouth while the top morphs into a cut-away cranial dome.  There are almost brushstrokes in some of the lip-things at the bottom.  It’s refreshingly fluid and non-squarish.  Perhaps that’s another painterly principle. 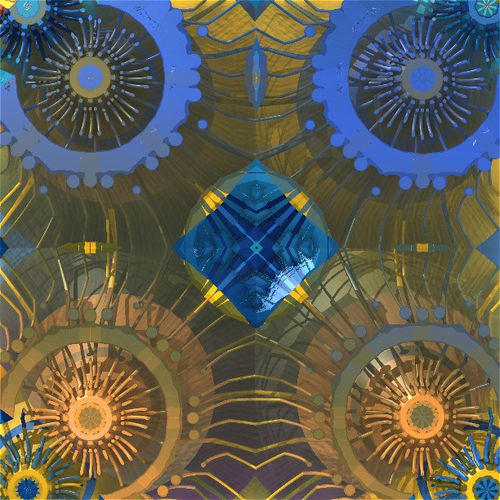 This one’s off Jacob Bettany’s Instagram site, a service I’ve got very little experience with but looks very art-friendly in its format.  Although clearly a mandelbulb derivative, this image does not seem to suggest zooming into it any more than one would step closer to a canvas hanging on a wall to take in the brushstrokes.  I like the color and the flatness to this one.  Flatness is something often neglected in 3d fractals.  This would be a watercolor if it were a real painting.

Well, there’s plenty more I could show here but I think you get the idea of what the “painterly” style is all about and how it works.  Hopefully more artists will take up the smudgy, over-exposed, flat and shadowy style a little more.  Sometimes it takes real genius to see just how simple, and how simply made, good art can be.  Especially in such a technology-laden, expert-heavy genre as fractal art where it’s much easier to make perfect photos than it is to make unique and stylish artwork.

One thought on “Paint by Fractals”