“After 85 gazillion fractals, I broke the camera out.”
-Manas Dichow on his Flickr site

Egold: “Love this one but it’s pity that yo’ve gone into “fractals” dream.”

“It’s amazing to me that this software can continue to produce such a broad range of images. I’ve barely scratched the surface of what Ultra Fractal can do.
Addicting.”

I’ve been ending up at Flickr.com quite often lately, following links to digital artwork from other websites (it’s not just a site for photographs). So I thought I’d try searching Flickr for fractal art.

I found a much more interesting mix of fractal art on Flickr than on Renderosity or Deviant Art; perhaps because the Flickr crowd is a more eclectic group of people? I don’t know, I was just very glad to have stumbled on this image by Manas Dichow after surfing through the link and “award” infested waters of Flickr. Manas’ image here was a real sight for sore eyes. 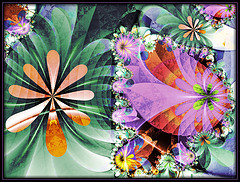 The comments sections of many Flickr galleries make the contortionist back-slapping and self promotional social networking comments of Renderosity and Deviantart look mild in comparison. On Flickr, they’ve even brought back the concept of “link-awards”. “Will you please put this link to my website on your page? — it’s an award!” Manas doesn’t need any of that to promote his work though, his artwork stands out on its own merits and I found it pretty quickly browsing through the other stuff posted to the Fractal category on Flickr.

Although Manas seems to be relatively new to fractal art (First fractal, Apophysis, Dec. 22, 2007) he’s not new to producing art and he brings a fresh perspective to fractal art, a genre which I would say, over the years, has become sadly inbred and populated with enlarged headed, banjo-playing, spirals.

I’ve heard that Ultra Fractal has a steep learning curve, but it seems Manas has had no trouble climbing way up there in a short time. But then Manas is no stranger to high heights; he was an accomplished member of a sky-diving team back in the 70’s when I was still learning to ride a bike. Speaking of bikes, here’s the artist on a motorcycle. 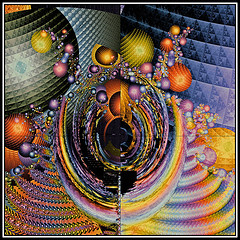 I really like the coloring in this one, Bullseye #2. Color is another aspect of fractal art that seems under-developed to me. So much of fractal art seems to have the same “style” or flavours in coloring. Manas’ image here is a nice departure from that. I also like the rough, jagged and more natural and wild appearance to everything. Manas has also produced many of the shiny, polished type of fractals which Ultra Fractal is known for, but he’s also managed to produce a wider variety of images than many UF artists who have been working with the program for years.

Burma Wishes also has a more interesting and “raw” look to it’s composition. It’s not the same old slick stuff that I keep seeing elsewhere, this has a fresh, natural style about it. And the coloring is bright, but not over-saturated or overdone.

I couldn’t end this posting without talking about Manas’ very impressive photographic works that are also part of his Flickr site.

Doorway With Wall by Manas Dichow 2007

In addition to the fine composition and other standard photographic skills that this photo demonstrates, it’s a good example of the power of High Dynamic Range Imaging. Basically, if I understand this right (I just discovered it on Manas’ site here) it’s a composite of several layers taken at different exposure settings. It’s interesting because there are photoshop filters that attempt to render the same effect by combining different contrast levels into a single image, making the darker parts lighter and the lighter ones darker. I think the effect of HDR produces a photograph which is actually more natural looking, as our eyes instinctively compensate for various light levels when viewing scenes like the one in Manas’ photo above. HDR is a better representation of what the human eye sees.

It’s also interesting to note the link that Manas’ work makes with photography and fractal art. I’ve noticed that there are many fractal artists who also find photography very exciting as an artistic medium. Perhaps there are some strong similarities between the two art forms, despite the obvious differences in hardware used.

Anyhow, I hope you’ve all enjoyed this brief introduction to new and wonderful work of Manas Dichow. Next week we’ll have another Image of the Week.