Art is a term that is used very loosely these days.  I happen to think that this casual application of the label, “art” to everything graphical has produced some confusion in the digital art world and obscured what has traditionally been known as Fine Art, submerging it beneath a flood of what I think is best described as Craft.

So, under the general label entitled, “Art”, I separate out two categories of graphical works: art, and craft.  There’s nothing new to such a division and we’ve probably all heard these terms before, but I’ve resurrected this old-fashioned and contentious division because I think it’s fundamental to understanding any art form, but especially any of our 21st century computerized art forms such as fractal art.  I would say that you can not begin to understand fractal art and the people who are involved in it unless you fully comprehend the difference between art and craft as well as the corresponding differences between artists and craftsman.  Art and craft are very different things and find their origins in their differing, and sometimes conflicting, outlooks on Art itself.  I would say that every art form, not just fractal art, possesses a deceptive appearance of unity and commonality among its practitioners because they all share an interest in a common medium.  The common “medium” in fractal art being fractal imagery.  However, if one takes a closer examination of the actual artwork being produced under what appears to be the common banner of “fractal art” there will appear, as will appear in every art form I believe, two very distinct and independent activities going on under that common label of the art form and it’s medium; that being the pursuit of craft and also the pursuit of art.

Art and Craft Defined
Perhaps not the customary dictionary type of definition, but I prefer more practical definitions to the stiff, technical ones.  Craft is visually exciting graphical work.  Art, on the other hand is all about expression.  Craft is “cool graphics” and “awesome 3D rendering”.  Craft has immediate appeal and makes a good impression with a wide audience.  Art is thought provoking and oriented around ideas and triggers some deeper experience in the mind of the audience.  Art is sometimes hard to understand or relate to at first, and subsequent to this, the audience’s impression is more unpredictable and contingent on their intellectual connection with what the work is about or expresses.  All those factors work, ironically, both to increase the impact of art on its audience and also to limit the size of that audience.  Craft is nice to look at; richly ornamental; variations on a common theme or style.  Art is sometimes unpleasant to look at; suggestive of some idea or feeling; difficult to compare.

Similarly, craftsmen pursue common themes and styles and focus on the visual novelty of their art form while artists share little interest with each other in terms of the techniques and methods of their medium, as the focus of their work is what it says or the thoughts it provokes and for that reason the medium is merely a tool for expressing these things just as pen and paper are tools for writers to express themselves and not issues of great importance.  For artists, the medium is secondary; for craftsmen the medium is primary and their only interest. 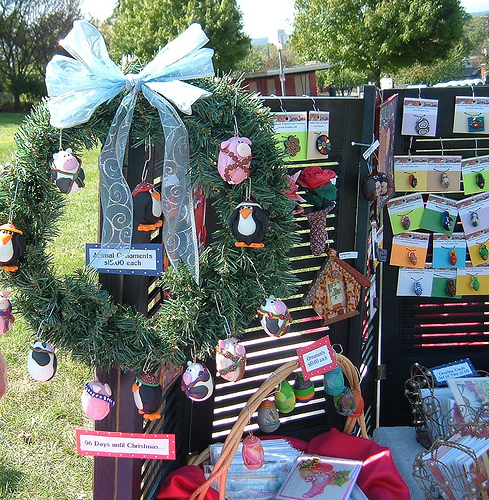 Why Art and Craft are so different
The reasons for these differences between craft and art come from their differing levels of complexity and intellectual involvement.  While it’s easy to say that craft is simple and decorative and art is complex and intellectual, I believe the difference is more accurately described from what attracts my attention when I’m looking at these two categories of art.  Craft attracts my visual interest in the medium, while art attracts my interest to what the medium is being used to express or convey.  Craft is rooted in the medium itself, while art is rooted in the use of the medium to present some mentally engaging experience.

And it’s all about experience, essentially.  Someone once defined art as an experience.  I think this perspective is much better because it zeros in on the common factor in all art –the viewer’s mind.  In this way, craft is a comforting and soothing experience which comes from looking at things which are pleasing to the eye.  Art is a much more varied experience and sometimes the complete opposite of that triggered by craft.  Art is sometimes unpleasant to look at and provokes feelings of disgust and fear.  Who wants to make or look at art like that?  Yes, good question.  I think you’re beginning to see how important –and divisive– the categories of art and craft really are.

Craft is the novelty of a medium
And Art is the novelty of the ideas expressed with the medium. The ramifications of all this for fractal art are enormous.  But then, they’re enormous for every art form.  Every art form has its artists and its craftsmen; every art form has its art and its craft.  Take portrait painting for instance: the Mona Lisa can be described as art because the expression on the subject’s face evokes strange and mysterious interpretations and corresponding thoughts –mentally engaging imagery.  The average portrait painted in oil paints is purely descriptive of the subject and while it may be quite life-like and have required a good deal of skill to produce, it’s really nothing more than a photograph rendered in a very expensive medium by hand.  What excites one about such a portrait is the medium; it’s a portrait “in oils”.  People are impressed with a life-like rendering of someone they know in oil paints because it’s hard to make or because it looks expensive.  It’s the craft they’re interested in, the oil paint medium.  But the Mona Lisa is admired today not because it’s a nice portrait, but because because it’s art. 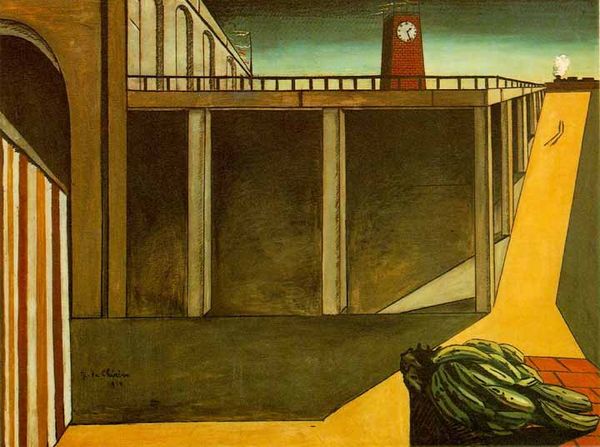 Gare Montparnasse (The Melancholy of Departure), by Giorgio de Chirico, 1914

Woe to you! Makers of Craft…
In the fractal art world today, most artwork is really the sort of thing I’m describing as craft.  It’s exciting to look at and appeals to most people who see it, but it’s purely one-dimensional and attracts the attention of people who are merely looking for rich, ornamental work that is comforting to the eye.  From an art perspective such work is an empty experience and trivial.  In fact, zooming around in a simple, single-layer fractal program is probably more of an art experience than looking at the latest crop of winners from the BMFAC, the fractal art world’s annual craft show.

While the Ultra Fractal Guild may not incorporate all the high school kids from Renderosity and Deviant Art, it by far encompasses the greater majority of fractal artists today and these people are strictly pursuing the creation of craft, not art.  This is not to say they’re making bad fractal art.  Craft is not bad art; craft is merely flat, one-dimensional, “awesome” art.  The UFG is almost exclusively making works that are purely ornamental, pretty pictures, as someone said, and not work that is thought-provoking or expressive, the attributes by which real art has traditionally been defined.  It’s art, not craft, and they’re craftsmen, not artists because their work is limited to just displaying the cool graphics of the medium and doesn’t use the medium to express anything more intelligent than the latest 3D technique or layering trick.

But fractal art isn’t like those other art forms, is it?
It’s not because fractals aren’t capable of the realistic or figurative imagery that painting, drawing and sculpture have traditionally employed via creative human hands that fractal art today is largely composed of craft and lacking in art.  Abstract art lacks realistic and figurative imagery and yet is still capable of expressing moods, thoughts and ideas, albeit of a much more generic, abstract sort.  And fractals are just like photography in the sense that one captures rather than creates the imagery they use.  If abstract imagery and photography can produce real art and not exclusively craft, then there’s no reason fractals can’t be used to make art because fractals are essentially abstract photography.  Fractals have the potential to be more than just pretty pictures that are sold as decorations at craft shows; they can be art too.

The notion that fractals are not art, or incapable of being art, and are exclusively the domain of craft, is merely the by-product of the current fractal art scene’s own narrow interest in pretty pictures as well as it’s popular annual events like the Fractal Universe Calendar and the Benoit Mandelbrot Fractal Art Contest.  More than anything else, those two public events have spread the popular impression that fractal art is exclusively the preserve of the rich, ornamental craftwork they regularly present, applaud and award.  But it’s to be expected that when craftsmen get together to create a contest that they will end up producing an exhibition of craft and not art.  Art is not their pursuit or their interest –craft is.

When will the revolution come?
I don’t expect to see much change anytime soon.  Most fractal “artists” are dedicated craftspeople because that’s their thing.  They’re never going to make real art because they have no urge to do so.  Some of them are extremely good at what they do and I’m sure we’ll see the results of more newly discovered techniques and methods each and every year displayed at the BMFAC craft show.  The Ultra Fractal Guild is all about craft and art is something they’re heading away from, not heading towards or traveling parallel to.  Which is why I said that the sloppy way we use the term, Art, today obscures the divisions in an art form like fractal art and deceives one into thinking that fractal art is one single thing when in fact it’s two things: the traditional pursuit of art; and the much more popular pursuit of producing craft.  Real art has barely begun to be made in the fractal world because there are very few artists.  There’s plenty of craftsmen working away in their fractal woodworking shops and producing “cool graphics” and “awesome 3D effects” but that’s not art.  It’s great craftsmanship and very popular and probably sells well too, but in the long run such works become trivial and insignificant because they lack the substance that real artwork has.

Do I expect this to have much influence on the fractal art world?  Not likely.  But again, that’s to be expected because most of them are crafters and they’re immune and indifferent to issues relating to art.  But for me this idea of art vs. craft is cataclysmic; breaking the continent of fractal art in two and revealing two unconnected domains from what was previously assumed to be one.  And the art domain is by far the larger one in terms of creative potential and significance, although it is relatively unpopulated in comparison to the much more popular and populous, craft domain.  Craft, as in all art forms whether it be painting, drawing, sculpture or photography, is always the more common type of work because it’s merely variations on a theme.  But art revolves around creative thinking and expression, and that’s always a scarce resource.  No finer example of this exists than the fractal art world today.

3 thoughts on “Art, Craft and Fractals”