Yes, fellow patients, and particularly those in the line-up waiting for shock-treatment, we are sometimes gripped by that psychotic condition which I would label, “fractalsport”.

Since I understand the mental state of those afflicted by this condition better than they do, let me avoid enraging you with medical terms and just show you a picture: 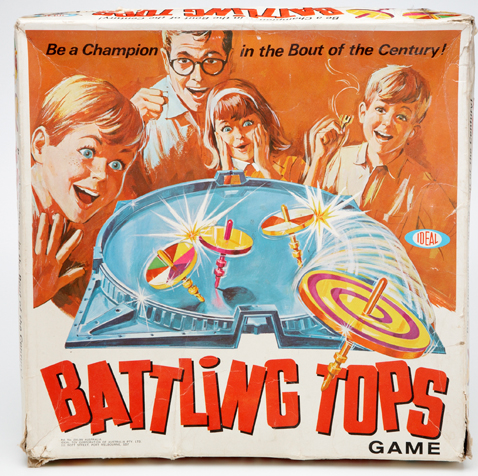 The precursor of all fractal art contests

Note particularly the spiral decorated top spinning off the board and into our laps.  Spirals were made for fractalsport and epitomize it: fast, attractive and begging to be spun.

I hope this next image isn’t too much of a sudden shock to the system: 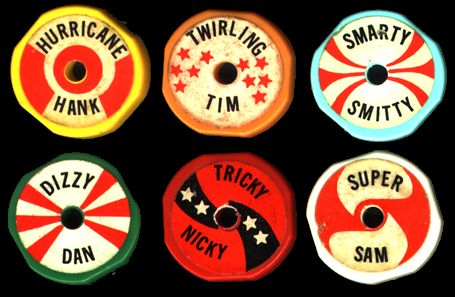 Yes, they even had usernames back in the proto-fractalsport era 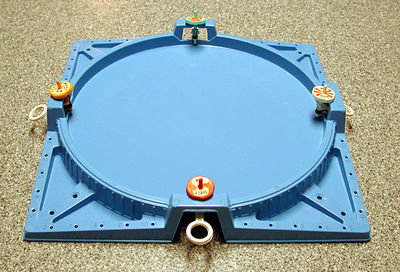 Any website or web-space can be quickly converted into such an arena-o-art as this with the sudden announcement of “contest” or, for those who are in a profound state of fractalsport and more accustomed to degenerative street language,  “compo”

Now that we’ve come to acknowledge our diseased state of mind and the pathology of our art form, let’s look and see what the latest “compo” has inspired and forget about seeking medical treatment.  In the words of Dostoyevsky: My art is bad, well–let it get worse!   Hey, I’m feeling better already. 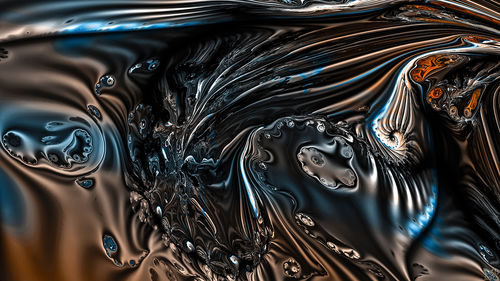 I’ve never heard of the user, Aqualoop, so this is a double-prize: new art and a new artist.  If that’s the case then this latest outbreak of fractalsport is having some beneficial effects; just like a high fever killing off one’s malarial infection.  What do I like about this image?  I find it to be Dali-esque.  If Salvador Dali, the great surrealist painter was to take up fractals, I think this is the sort of thing he’d get excited about.  The melted, distorted look is almost a “Persistence of Fractals”.  The lonely, barren, sun scoured landscape in the top-left corner also suggests to me the mark of the master himself.  Then there’s the embyonic forms floating around and the overall fluid, flowing feeling connecting such small scale items with large scale things like a spiral galaxy in the mid-right.

This image is a good example of how subtle fractal art can be and how it can strongly appeal to one person, like myself, and possibly not appeal at all to many others.  I’m going to be quite disappointed if the Aqualoop battling-top gets bounced off the board by another.  But that’s the way of the compo.  It always happens that the real art gets trodden on by the imitations. 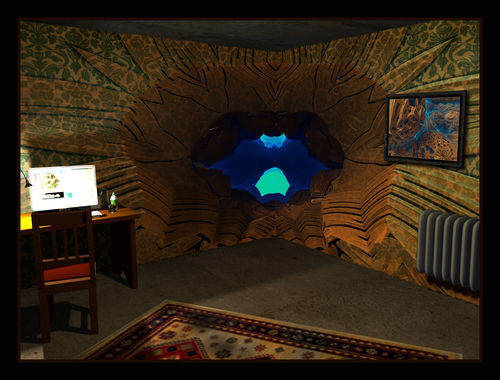 Philosophically speaking, I really ought to dislike these images made from combining realistic elements with fractal ones but something in my mind keeps overruling that other sense of propriety and good taste.  Perhaps it’s because this one has such a great narrative to suggest: a meeting of the digital and the real; the portal to the parameter worlds.

When you want to tell a story you don’t need much to illustrate it if it’s a good one.  A little nudge is all the reader/viewer needs to have.  I suspect these composite images are going to be much more common than they were in the old days before 3D rendering.  3D fractals seem to mix better with our inherently 3D realistic world imagery. 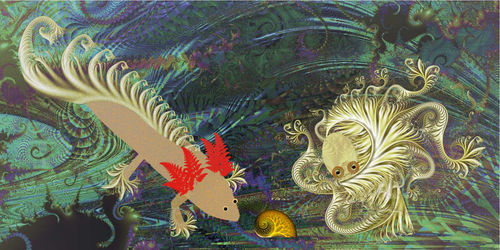 Yeah?  So what.  I like it.  Now let’s try to figure out why.  I’m not too excited about the yellow snail or the bright orange fern-thingies on the axolotl creature (it’s a long story, the axolotl thing –and category).  But the grainy gold, blurry-layered, spiral creature bits have some dreamy quality to it.  And the garbage UF style over-layered background normally makes me gag but this time, combined with the goldy swirls, transcends the usual reverse peristalsic outcome from such workings and becomes something that I’ve actually been staring at for some time now.  Maybe it’s because the smeary background resembles the background of a microscope slide and that sets a new context –discovery– for the golden creatures.  Have I failed another Rorschach test? 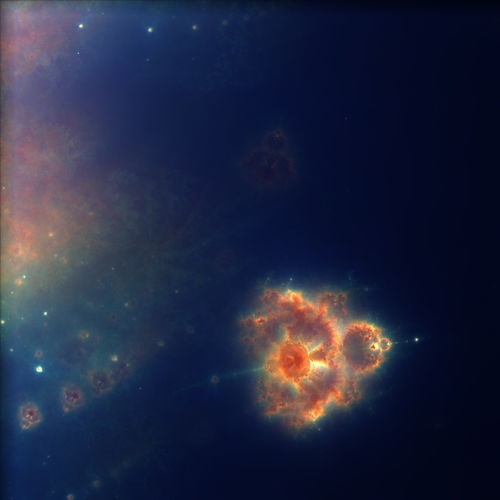 The buddhabrot is like a lobotomy: bold and simple, it never fails.  In fact, all the buddhabrot formula needs is some good coloring, which is what knighty has introduced here.  Or as he says: “Just experimenting with Metropolis Hastings method for rendering the buddhabrot and thought that one is good enough for participating in the compo. Hope you like it.”  The buddhabrot deserves an entry category all its own.  Knighty has always had a good sense of color. 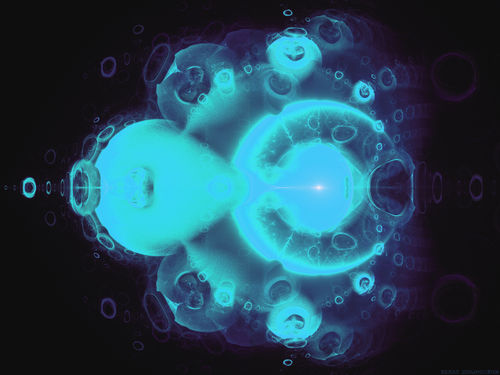 Brahma-brot?  Hey, expect the unexpected from Alef.  I’ve always liked his simple renderings which allow the fractal formula to do the drawing.  He’s done something special here with the formula.  Since I don’t understand what it is, I’ll let him explain:

Although I think the buddhabrot is a 2D formula, it’s always had a sort of 3D appearance even when rendered in 2D.  I’m not surprised to see someone like Alef experimenting with variations as, like I said before, the buddhabrot deserves its own category because it produces such rich and intense imagery. 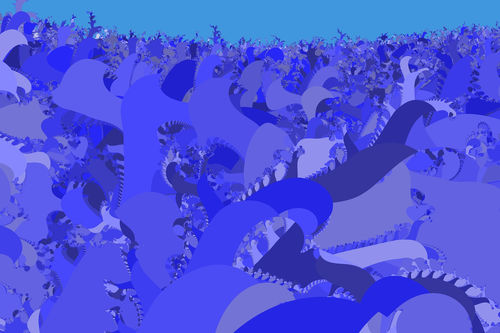 I’m impressed more with fractal art that looks raw and alien rather than with the stuff that’s touched up and skillfully presented.  Maybe that’s because it’s more fractal or because it’s less human and therefore more unexpected.  There’s a style that comes with such arbitrary imagery that is captured in the wild and never domesticated.   Maybe most fractal artists don’t really like fractals? Phtolo I’m guessing is another newcomer to the scene although one can never really know when it comes to usernames.  The sense of wilderness which a turbulent seascape exemplifies is certainly in this image but the fractalness of it adds a strange sense of order, deliberation and primordial thinking to the scene.  Each wave is doing its own thing and reaching out for something to pull back into itself.  Does that sound crazy? 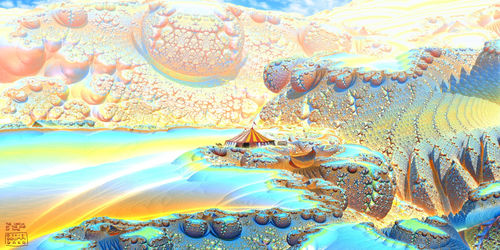 The Circus at the End of Time by Brummbaer

Another fine example of how small realistic elements can act like a spark setting off a whole new impression in your mind.  But didn’t I say I was more impressed with the raw, untouched stuff?  But this is what makes the incorporation of realistic elements such an artistic challenge.  You have to find something that fits with the fractal and when combined creates synergy, something that works with and multiplies the effect of the other.  Also, incorporating other elements doesn’t have the same graphically distorting result that global effects do.  Brummbaer is pretty good at this delicate job of sparking the image.  Are those hills in the background really clouds?  Isn’t it winter?  Or some kind of fifth season?  I hear music.

Description: The Circus at the End of Time
When you get closer to the circus you will find a door that says:
The Magic Theatre, for madmen only – price of admission, your mind.   (Steppenwolf by Herrman Hesse)

Well, there you go.  According to Fractalforums.com the compo closes for entries at the end of May and then the “voting” (whatever that means) starts.  But in the world of fractal art the game never ends!  Competitions come and go and the losers always win.  Let’s hear it for the next bunch of winners.