From the developer’s, Tim Day’s site:

Fracplanet is an interactive tool for creating random fractal planets and terrain areas with oceans, rivers, lakes and icecaps. The results can be exported as models to POV-Ray and to Blender, or as texture maps for more general usage. The code is licensed under the GPL. It uses Qt and OpenGL.

At the Sourceforge project page for Fracplanet, where you can download the program, this note, by Tim Day:

I’ve been using various versions of fracplanet for sometime now, and it’s extremely useful in creating planets. What you can use the program for is quite varied.

“What you can use the program for is quite varied.”  With that begins our x-ray of art.  Zzzz-zap!

But one more software detail.  I tried out Fracplanet with the hope that it might do what Terraform, another little project for drawing landscapes, used to do.  I say “used to do” because it no longer seems to be available as it’s been abandoned and no longer kept up to date with the latest compiling and other technical software things that are beyond my own reach and expertise at present –the versions are old and won’t run on the latest Linux releases.

Terraform could render eerie, x-ray moonscapes with relative ease.  Terragen, the well-known and highly capable landcape renderer, seems in-capable of doing this.  Why?

To put it into technical, graphical terms:  Why is wire-frame rendering not seen as the most important and best artistic use of a fractal terrain generator?

To most readers the answer is painfully obvious.  Who wants to look at wire frame imagery?  The whole purpose of terrain generators is to create realistic looking terrain, not retro graphics. 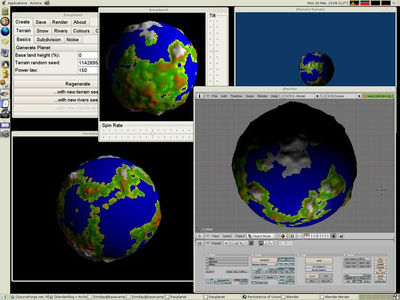 Fracplanet 0.3.0 with terrain exported to POV-Ray and Blender. (from Tim Day’s site)

Neither Fracplanet or Terraform (RIP) advertise their wire frame features.  That’s because wire frame for most users is nothing more than a degraded version of an image presented for planning purposes.  Nobody intends to actually build landscapes out of wires –especially black and white, monochrome wires.  Like this: 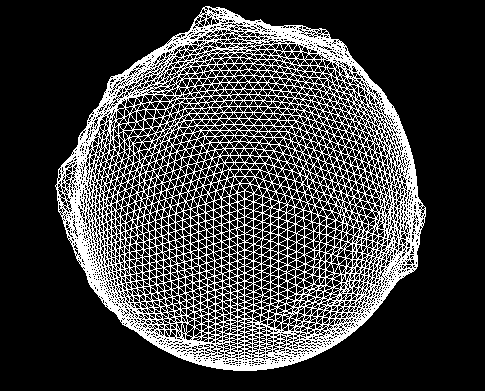 Art?  In some ways, Fracplanet is better than Terraform because its default image shape is a sphere –a planet.  Sphere’s are circular and the circle is probably the most creative of all shapes by virtue of its great potential for doing all sorts of shape-y things.  Carl Jung, the high priest of 20th century abstract art, said it this way:

“The circle has had enduring psychological significance from the earliest expressions of human consciousness to the most sophisticated forms of 20th-century art.” Aniela Jaffe, ‘Symbolism in the Visual Arts’ Man and His Symbols (Carl Jung)

“The circle is a symbol of the psyche (even Plato described the psyche as a sphere).” Aniela Jaffe, ‘Symbolism in the Visual Arts’ Man and His Symbols (Carl Jung)

I know it’s all psychology mumbo-jumbo, but it looks great when you mix it with art.  Circles have an extra dimension to them, visually speaking.  Who knows why?

Another question:  Why do fractal terrain developers never quote Carl Jung on their software sites?

Which brings us to this “x-ray” question about fractal art:  What is more important, the fractal or the art?

I mention this because although Fracplanet and Terragen (the Photoshop of terrain generators), use fractal algorithms in their creation of realistic looking landscapes, they aren’t really what I think most people would consider to be “fractal” programs and therefore “fractal art” programs either.

I was quite happy that Tim Day, the author of Fracplanet included “frac” in the title because that made it much more easy for me to pawn off whatever it could make under the label of “frac-tal” art.  Or is all landscape a type of fractal imagery and therefore fractal art of the most fractal-ish kind?

In that sense, the label, “fractal art” is as loosely applied to the output of a program like Ultra Fractal, a standard fractal art program, as it is applied to the output of Fracplanet –that is, if the goal is to produce art and not images for a science textbook.  To carry this thought a little further:  One ought to consider how “adulterated” and contaminated fractal art has always been since the very day fractal algorithms were given visible appearance.

There’s always been a touch of mystery in art when one thinks about it and especially when one attempts to explain it.  Call it “subjectivity” as in the phrase, “art is subjective”; but that is only the acknowledgement that art is oriented around the mind and not the tools that make it.  An art form defined by its toolset, its medium, is bound to be limited by “tools”.  That’s tools as in “you stupid tool”.

Great art is not the product of a great medium or of great tools.  Often it’s more of an accident or the result of someone like Roy Lichtenstein who saw something alluring and intriguing in making “paintings” of comic book images –the wire-frames of his times.

“What you can use the program for is quite varied.”  I think all developers are aware that what users will want to do with their programs will always extend beyond what it was they actually designed them to be used for.  And so, people have used Microsoft Excel to draw fractals instead of creating financial reports, and similarly “abused” the text-only capabilities of computer consoles to “draw” Ascii art instead of configuring their operating system.  Or Fracplanet to draw wire-worlds using the parameters in unnatural combinations: 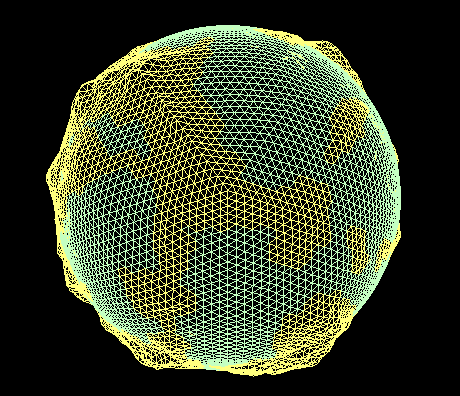 This is more art made in Fracplanet 0.4.0

Fracplanet allows you to set the colors for several landscape features, mostly height-dependent like snow, mountains, hills, lowlands, shore, ocean –highest to lowest; but also rivers.  This allows one to create a two-color “monochrome” image.  It resembles a cheaply printed book illustration. 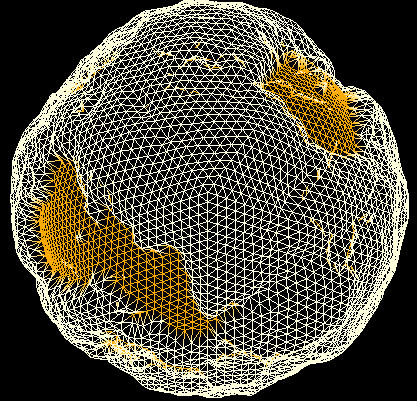 Yet more art made in Fracplanet 0.4.0

Altering the “Power Law” under the “Basics” tab allows for the generation of much more misshapen freaks of planetary nature such as this one.  That’s what power in the wrong hands will do!  The (so-called) “shore line” becomes the “frame of the ocean” and you can make it a transition color blending the land and sea together.  Note how the “planet” is now taking on the appearance of a microscopic dust particle.  Isn’t that ironic?  Or have I simply reduced a great program to nothing?

Is it better than the Mandelbulb?  That sounds ridiculous doesn’t it?  But really, such comparisons ultimately revolve around what it is that one wants to do with a program.  I’ve noticed that not everyone makes fractal art for the same reasons that I do.  Not everyone is pursuing the same interest.  There are a variety of interests in fractal art, that is, some of us are more interested in oddball imagery than rich, photo-realistic renderings.

How did such a disparate group of people (or am I the only eccentric one?)  end up being grouped together under the same label of “fractal art”?  In the words of the “developer-sage” Tim Day, author of Fracplanet…

“What you can use the program for is quite varied.”