Stop what you’re doing, forget everything you know –and just jump into fractals! 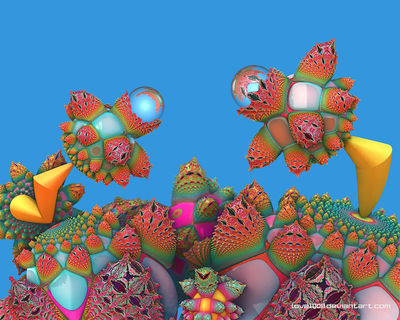 Synthetic.  That’s a good word in computer art.  You like synthetic things if you like computer art.  There’s too much color in this?  It looks unnatural?  It’s synthetic, just like those chewy fruit candies that don’t really taste like real fruit.  They taste better than real fruit.  Space age flavours.  This image has space age colors.  Love it, or the image will delete you.

Based on that watermark in the bottom right corner, I think love1008 would like you to visit his Deviant Art page.  If you’re color blind you won’t see anything.

Now, I know this is going to sound a little weird, but I find the next image to be fractal like even though it’s a four hundred year old painting of Mary Queen of Scots: 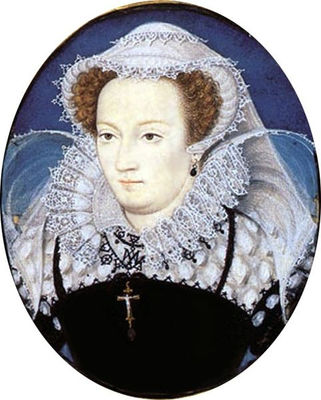 Here’s a fractal made with Sterlingware, the fractalist’s fractal program: 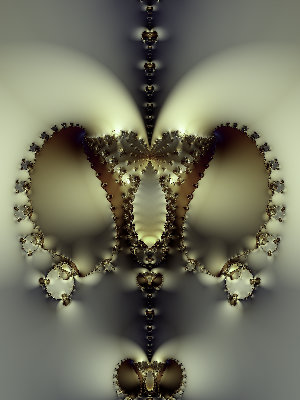 Don’t see a resemblance?  They’re both made up of curves, lacework, smooth textures, and all arranged in an almost –fractal-like way.  One just happens to have a women’s face in it.  All the rest is pure geometry.  I’ve seen better fractal examples of this sort of lacework, frilly, curving portrait like imagery, but this is the only one I could find easily. 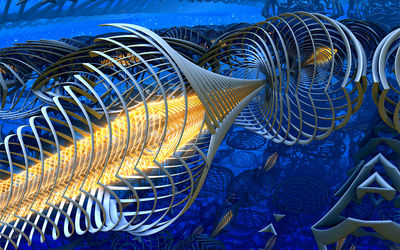 Little things, like exponents, negative signs and zeroes have the ability to transform context and context transforms everything else.  Is this a particularly artsy, expressive kind of image?  I don’t think even the artist thought so or he’d have given it a more sublime title.  What I think makes this image so interesting is the thing in the upper left corner and middle that resembles a hillside at night with city lights on it.  Here’s a detail from the full size: 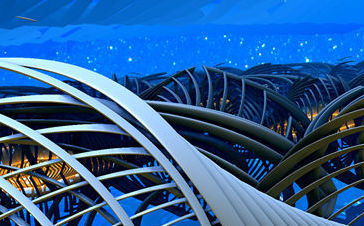 Then the bright, glow worm, firefly image in the center and the dark, shadowed, silent area to the lower right give the image a strange depth and contrast between brilliant, energetic and moving and the other: subdued, silent and secret.  I was a little confused when I first saw this image because it seemed so vivid and alive and yet appeared to be, on the surface, made up of such ordinary things. 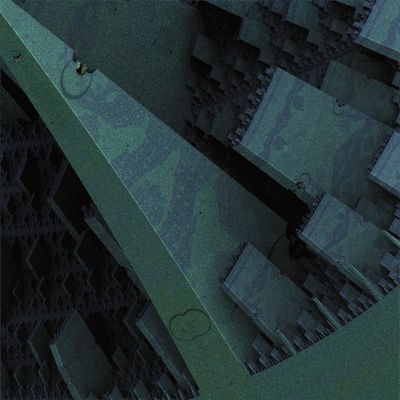 Trafassel is always doing bold and unique things, but here what’s remarkable is the nice simple style of the image.  It’s haunted.  A city of cities built in the dark, or built for the dark.  Here’s the finest part of the full size image: 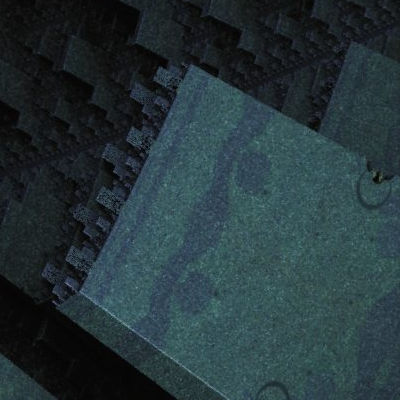 As weird and intriguing as a pulp sci-fi cover.  That light edge shading and marble surface texture looks painted and not computer calculated.  A rare glimpse of style in the land of fractals.

The image comes from a posting on Fractalforums that appeared over the recent Christmas holiday season announcing a new type of 3D fractal, tentatively named the Mandelex.  This image above was Trafassel’s experimentation with that new formula. 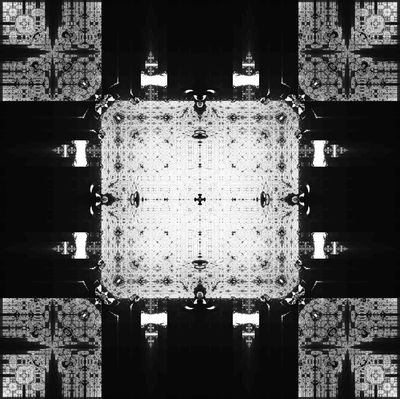 Although I think Hiato was probably working in black and white for simplicity’s sake, the stark color scheme is perfect for the type of intense patterning that this formula does. 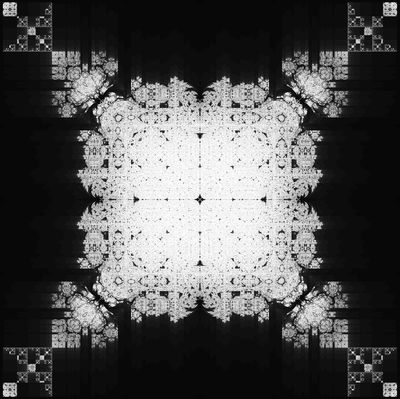 Click to view the larger versions so you can get a better view of the rich detail.  Hiato mentions the serpienski pattern at the corners which is another interesting feature.  Unfortunately the thread seems to have gone dead with nothing else posted to it for a month now.  But that may just mean Hiato and the others are tied up with other things for the time being.  I think this could be an interesting development for the future.  It was mentioned in the recent Chaos TV video from Fractalforum.com’s sponsor and owner Christian Kleinhuis. 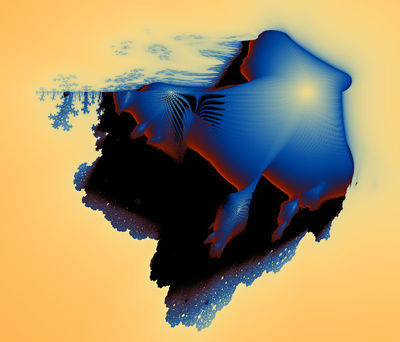 Similar to the Mandelex, this one has raw, graphical creativity.  Although it’s just a variation (I think) of the Burning Ship formula, that one was pretty good all on its own too.  Note how the orange area goes from being sky and background in the upper left and then turns into a precisely cut wall or slice in the bottom.  Likewise there are similar “multi-dimensional” effects with the dark areas becoming space and then silhouette.  And then there’s the hazy sun image in the “sky” of the blue figure in the top right area.  It’s an object that defies objectiveness, just like the tricky optical illusions in Salvador Dali’s many surrealist paintings.  Raw fractals sometimes need nothing but a frame and that’s all Alef has done for this one.  That’s a mark of genius in the fractal art world. 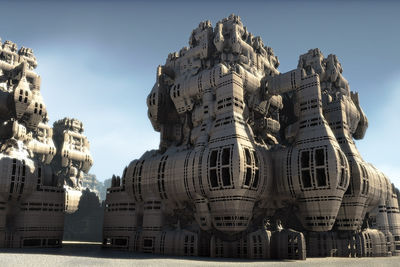 3D fractals could almost be considered a type of synthetic architecture.  Art Nouveau, an architectural style as well as a style of painting and decoration, would be just the category for this image.  This is one of a new type of image that features the curving, non-squarish style of imagery.  I think it’s going to be a whole step up for 3D fractals because the addition of such curving surfaces and designs makes for much more creative and interesting forms.

Speaking of Art Nouveau, here’s something that looks like one of Gaudi’s famous buildings.  All it lacks is a little more curvy-ness  to offset the sharp edges and regular lines, but it makes up for that with that extremely ornate and creative point. 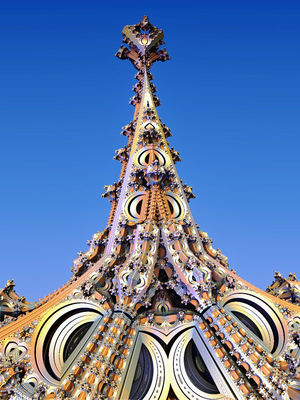 This of course is a painting, watercolor maybe, in the Art Nouveau style of Charles Mackintosh who apparently was Scottish.  Rather unusual location for the Art Nouveau movement, but like many ideas in art it resonates with artists from all sorts of backgrounds.  I included this because it’s a great example, as is most Art Nouveau, of flowing, geometric imagery.  And so are most types of fractal imagery.

I think fractals are most powerful in impression when they exhibit this sort of symmetry and complex pattern and simple shapes.  That’s all this image really is; the hand painted faces, which fractals can’t produce, add something to the image but could easily have been substituted by simple shapes. 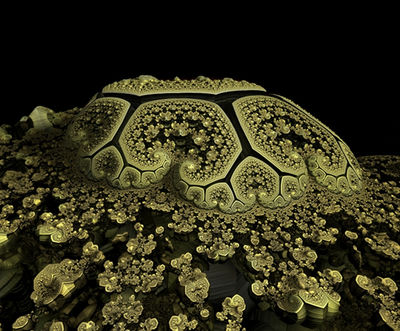 What makes this image remarkable and worth turning our attention to?  I don’t know.  But there’s something compelling about that big lump of fractal thing.  It’s like a photo from a fractal biology textbook.  This is something exotic and found growing only in remote places.  Smaller versions have been grown in the laboratory, but they lack the robustness and size of ones like this that grow wild, on the side of a mountain, only lately discovered. 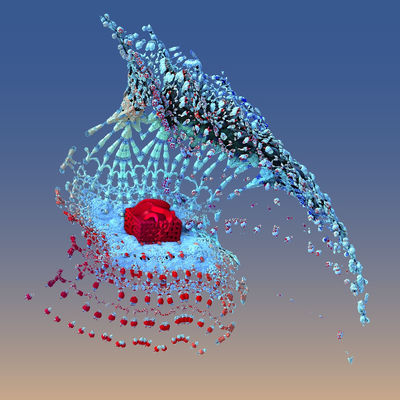 What is it?  It’s a hand.  See the red box thing in its palm?  It’s a hand showing you this thing it picked up.  It’s been picking them all day and that’s why its fingertips are all covered with red stuff. 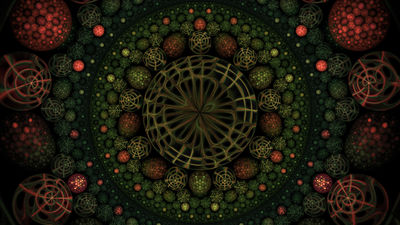 I think this was made with Apophysis.  Not your average flame fractal image.  Once again, I present an image with strong geometric characteristics.  That is, except for the interesting woven sticks things in the center and other ball like structures.  I think that’s what caught my eye at first.  This image is a wide screen wallpaper and you really need to see it in its natural size to appreciate the detailed concentric circles.  It looks very Christmassy, but still has enough general appeal to be looked at all year round.  Perhaps it’s an aerial view of a forest and we’re looking down at the round outlines of the trees.  The biggest one in the center being set high up on a hill.  Apophysis can be used for good and not always for evil. 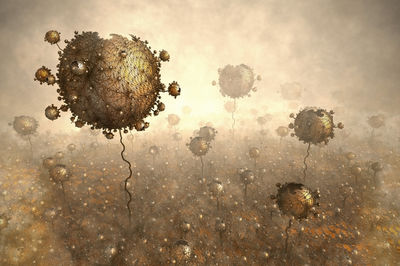 Life as we don’t know it by Kali

Kali’s been on a roll lately.  Coming up with all sorts of graphically intriguing stuff.  I think I mentioned his sea creatures and especially the scary, scary elephant worm in a previous posting.  Recently he’s come up with animated fog for one of the 3D mandelbulb programs that looks like it was made in the computer lab of a major movie studio.  And there’s the exploding mandelboxes, too.  I can’t show any of them here because they’re flash applets.  Step right this way folks, to see the floating brain and also the amazing liquid planet (scroll down to it).

This image incorporates, I suspect, some of the volumetric fog rendering techniques he’s been experimenting with.  Depicting depth is technical challenge in all computer rendering because the appearance of depth, if you think about it, is the result of many complex things, such as air, which have to be deliberately programmed into the imagery.  Perhaps it’s harder to generate the impression of depth than it is to program the fractals themselves.

The fog is used to create the appearance of distance as more distant objects are deeper into the fog than closer ones. It also produces a rather nice effect in general making the image look more painterly than the average mandelbox.  But it also has nice coloring and a fine use of lighting.  Lighting is something that is a parameter –adjustable element– in 3D fractals and it can be used for better or for worse.  This is an example of the better use of it, in fact, it’s an excellent example.  Not only that,  there’s a nice space at the top right for the title of the 2014 Fractalforums.com Calendar to go.  It’s a natural choice for the cover and exemplifies the latest rendering techniques as well as the exotic sights that fractals can produce.  Furthermore, this one has real commercial appeal to it being so well composed and finely rendered. 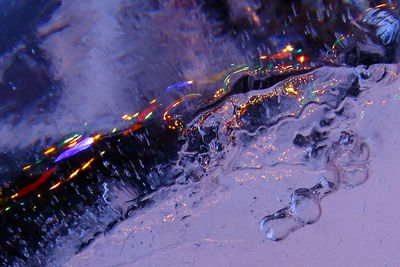 Heavy duty 3D programming here.  If you click on the image you’ll discover how easily it was to make: just a camera click.  I’ve always felt that there’s more to fractal art that pertains purely to the eyes and mind than there is that pertains to the programming and math.  From such a perspective, such a radical, precarious perch, comes the intuitive notion that other things are close to fractal art even though they are not anywhere near fractal math or programming.  Here we start from the premise that the medium of fractal art is pixels –imagery– and not parameters.

Is that crazy?  I think I hit my head.  That can happen when you just blindly jump into fractals.

4 thoughts on “Jump into Fractals!”