And about these continuous and pointless attacks against Ultra Fractal, maybe you should just start displaying some fractal images that obviously cannot be realized in Ultra Fractal. I haven’t seen any on your blog so far. The ease with which it is possible to implement ideas into algorithms and then works (especially with the new object oriented programming) makes it for me without any doubt the best tool available for algorithmic art. Anyway, a constructive approach would be less boring for your readers.

That was a comment by Samuel Monnier, an unrepentant Ultra Fractal user, commenting on a recent posting here at Orbit Trap.  In keeping with the Space exploration analogy which I used in the title, Sam has the “Right Stuff”, the thing which Tom Wolfe said separated the mediocre astronauts from the ones selected by NASA to go on the elite space missions to the Moon.

What I think Sam is getting at (besides suggesting that Ultra Fractal is being attacked pointlessly) is that he has found Ultra Fractal to be a tool which allows him to easily create Original Algorithmic Art.  Sam (and a few others) are using Ultra Fractal to do extremely un-fractal things.  Isn’t that exciting?

I’ve been using Ultra Fractal for about ten years. I’m mainly interested in producing images which display structure at every scale, everywhere, unlike most more traditional fractal images, which display structures at small scale only in some very limited regions. The goal is that the viewer should be able to enjoy the work when looking at it from far as well as when looking at it with a magnifying glass. To this end I developed a private algorithm, taking advantage of Ultra Fractal’s versatile formula editor.
(from http://www.ultrafractal.com/showcase.html)

The algorithm I wrote is inspired by the one used to produce Brownian clouds. The idea is to draw a pattern, and then sum it at smaller and smaller scales. This gives the image structure on a wide scale range while preserving some kind of homogeneity, as the patterns you will see with your magnifying glass will be roughly the same as the ones you see from far. Each image is a whole little world that is rather difficult to imagine from the low resolution pictures displayed here.

The possibility to use classes in algorithms introduced recently with Ultra Fractal 5 allowed [me] to substantially increase the diversity of patterns this algorithm can create.
(from http://www.ultrafractal.com/showcase.html)

“The idea is to…”  Sounds rather creative and speculative, doesn’t it?  Not the usual Mandelbrot this, or Julia that or tweak-fest tricks.  Could this sort of thing explain why Sam’s artwork is so different than the usual Ultra Fractal trash that fills up that annual garbage can of fractal “art” called the Fractal Universe Calendar?

Enough words and talking, let’s look at some art: 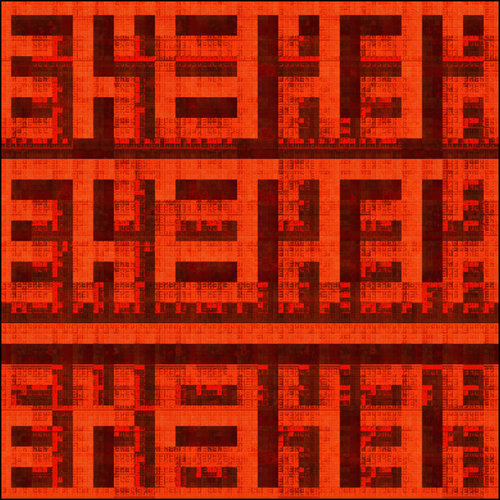 20080720 by Samuel Monnier, from the Ultra Fractal Showcase
Click for larger view

Strangely, this is one of my all time favorite images, I cannot exactly say why. It is based on a Truchet pattern. The Truchet pattern is constructed from randomly oriented decorated square tiles. In this image, their orientations were chosen not quite randomly in order to create this strange alphabet. Note the symmetries of the “text” between the dark and light regions, and how the fine texture reproduces it.
(from http://www.ultrafractal.com/showcase/samuel/20080720.html)

“…to create this strange alphabet”  Hey, far out.  You really have to take a look at the larger image to see what Sam’s talking about.  Which brings me to the question, What is Sam talking about?

It ain’t no fractal.  Or maybe it is — mathematically speaking.  I guess what I mean is that this isn’t the sort of image one expects to see from a fractal program.  This is the sort of thing I would expect to see from a non-fractal algorithmic art program or coming from a series of photoshop filter mutations.

It’s time to head to the stars, boys and girls!  Fractals are great but there’s a great big universe of algorithms out there to be explored.  Maybe Ultra Fractal is the ship to take us there.  Maybe it’s time to stop using layers to make wispy, flowery stuff to fill that annual eyesore and start making bold new structures like Sam.

I used to say that the best way to tell if a program was any good or not was by looking at what was made with it.  That’s why I made those “pointless” attacks on Ultra Fractal, because every time I found some glossy, cliche fractal image on the internet it almost always turned out to have been made in Ultra Fractal.  That’s also why the work of Samuel Monnier and Paul DeCelle stood out in such stark contrast — they they’re work is creative, original, algorithmic art.

In my personal artistic opinion I think the programming capabilities that Ultra Fractal has that allow it to make these sorts of “non-fractal” images is something that should be pursued more; it’s more high-class than the traditional fractal stuff.  The fractal image layering and image importing features have very limited artistic potential (unless you like that sort of thing, of course) when compared to using Ultra Fractal as a programming platform for algorithmic experimentation.

Of course embarking on these sorts of algorithmic voyages requires the programming and theoretical skills (math) which the average Ultra Fractal user doesn’t have, but I’m sure when new users see more of this type of artwork it will generate a lot more interest in learning how to write formulas for Ultra Fractal to the point where such specialized skills become a routine part of the creative algorithmic art process.

Yes, some day Space Travel will be common place and perhaps Ultra Fractal will change it’s name to Ultra Math or Ultra Formula or 2001: An Algorithmic Odyssey.

One thought on “Is Ultra Fractal Really a Fractal Program or Is It a Bold New Spaceship By Which To Explore the Algorithmic Heavens?”