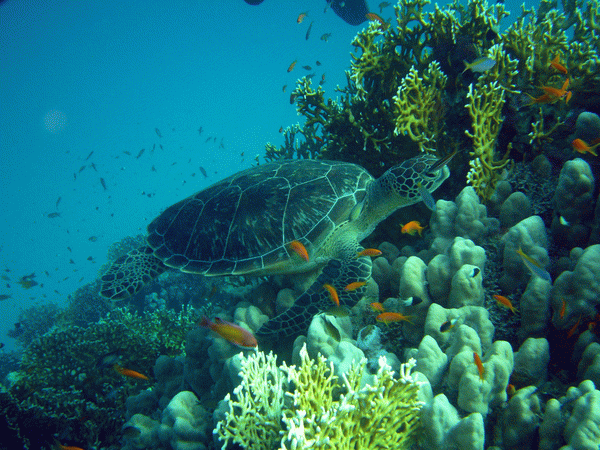 Under Red Sea, by maruscya
I think working with fractals is very much like the art of nature photography.  Nature photography tends to be descriptive, showing what things look like and focusing primarily on the form, color and interesting situations that one finds in the natural world.  Sometimes you see a really startling photo that expresses profound ideas like fear, terror, contentment,  or raw, animal power, but mostly nature photography is just pictures of nature and appeals to those who like natural imagery.

But when one looks at the larger world of art which contains works of social commentary, intense emotional expression, and other creative work drawing heavily from imagery found only in the human world (faces, buildings, technology), then what are we fractal “nature photographers” to do if we want to produce fractal art that is more than just weird patterns or the proverbial eye-candy?

In the pursuit of more than just eye-candy, fractal art faces the same challenges (frustrations?) that abstract art does:  It’s hard to express complex themes from the realm of human experience without the rich symbolism that realistic imagery provides.  This is why attempts to do this with fractal/algorithmic imagery often depend heavily on the title the image is given — you have to tell people what it is.  I don’t think fractal imagery is very good at conveying ideas or themes in the way that photography and the hand-made arts (painting, sculpture…) are.  It’s an interesting aspect of fractal art to pursue, and maybe some really profound works in the future will change my opinions regarding this — like the creation of some sort of Fractal Guernica — but I feel it’s not the sort of thing that fractals have a lot of potential for.

I think it’s just the nature of fractals that they don’t say much or fit well into social/political commentary.  In that sense, nature photography actually has an edge over fractals as it’s quite conceivable that animals and other elements from nature can be convincing metaphors for things in the human world, like predators for criminals; peacocks for pompous, narcissistic rulers; eagles for noble virtues; and that sort of thing.  There have already been a number of books written using animals as metaphors for certain kinds of people, although as far as the artwork that might accompany them goes, I’m sure the illustrations weren’t photos of real, natural animals because they’re not likely to express quite so effectively those human characteristics as well as a hand drawn, artificial caricature would.

Although I am still thinking these things through, it’s my growing opinion that fractal and algorithmic art will achieve its greatest successes by being more fractal and algorithmic and focusing on the beauty of mathematical/algorithmic imagery.  If others can succeed in other innovative ways using fractal imagery such as creating the Fractal Guernica of our times, then I think that’s a noble pursuit and I admire them for taking up that fractal art challenge.

3 thoughts on “Challenges for Fractal Artists”