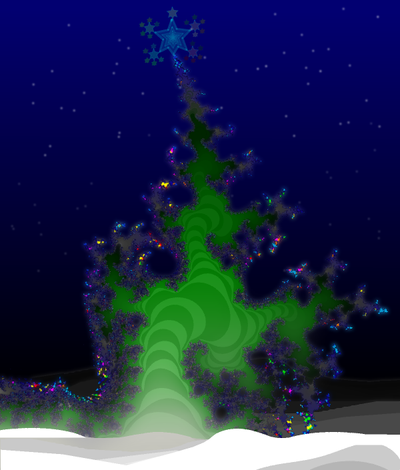 “Yes, there’s prizes. However, to be eligible, I need at least 2 entries.”

…Lifetime subscription to MegaDJ. This will only be useful if you have Mediamonkey, but it is the best music player…

…Permanent free access to MIDI Transform … and Stereoptica … These two are currently almost free, but they possibly won’t be with the next versions…”

All quotations from Fractalforums.com announcement

At first glance (that’s a legal term…) it appears to be nothing more than just a friendly social event for the members of Fractalforums initiated by one of it’s cheerful members. The Christmassy theme (and the inability of contestants to stick to it) and the small, token prizes — it’s the sort of holiday get-together that’s being repeated in, no doubt, hundreds of other places on the Internet or in local art groups and schools offline.

I can’t quite figure out the prizes. But I guess that just adds to the homespun feeling of this little holiday “compo”. The winner (chosen by twinbee, I guess) gets all of the stuff on the list? Or just gets to choose one item?

The $20 is pretty simple to figure out. All you need is a Paypal account to receive it and that’s fairly simply to get. If you’ve ever bought anything on Ebay, you’ve probably got one already.

The website for the company that sells the media player and it’s “lifetime” membership says it’s worth about $50 which is substantially more than the cash award (assuming you have to chose one or the other). I’m assuming that you aren’t just going to get someone else’s lifetime registration code by email which is already bouncing around the Net. I’m sure the media player people have set things up to prevent that anyhow.

It’s no big deal if twinbee wants to advertise his website Skytopia.com. If that’s the case (and my sneaking suspicion is that’s what this holly, jolly contest is all about) it’s only costing him $50 at the most (the media player). Most likely the winner will opt for the $20 cash once they figure out how to receive money with Paypal instead of just paying someone with it.

I visited Skytopia.com (another plug for the hard working twinbee) and it’s certainly a rather colorful place. And the man knows how to program stuff — programmers never get enough respect.

And he likes the old fashioned computer music… (I never realized how advanced the Commodore 64 was at it’s time).

The Moral of the Story

“Moral” as in lesson or message of the story. (In case you think I’m suggesting anyone’s done something dirty or sleazy here.) Many contests are deliberately set up to be self-serving publicity stunts to directly benefit the contest organizers themselves and only pretend to promote the art form that they claim to represent.

I’m not talking about mere sponsorship; sponsors pay the expenses and advertise their logo or products in association with the contest. It’s just another form of advertising for the sponsors and one which isn’t always the best deal for them either (because the main event isn’t about them).

Many contests only pretend to promote the interests of their associated art form. The Benoit Mandelbrot Fractal Art Contest and the Fractal Universe Calendar being prime examples of this. Watch out for those and don’t be a sucker. As for twinbee’s Chimbo Tree event; it’s just some light hearted fun by a guy (and his favorite online forum) who just wants to share his varied computer arts hobbies with a few more people than he did last year at… Skytopia.com.