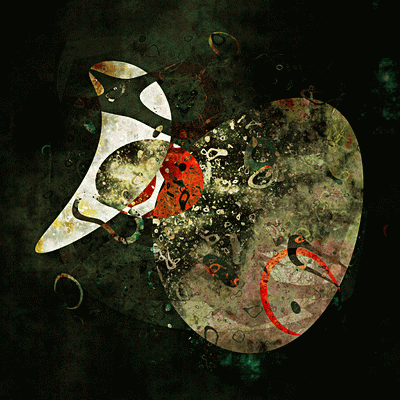 Why? Because of the playful abstract shapes and the rich textured and detailed surfaces that one commonly finds in the work of both these talented artists. Their mutual connection with the land of Toblerone is just a coincidence, I’m sure.

Here’s an online poster site for those of you who may want a quick refresher on the work of Paul Klee or a sudden introduction. Maybe you won’t see any connection with the works there. That’s okay. Not everyone has my gift.

I’ve just picked what I thought was the best example from Sam’s Para-Mathematical Gallery, but there’s many others there that are well worth looking at. This one is typical of the rich and varied, but subtle and subdued color combinations that Sam uses. It really shows how powerful a tool Ultra Fractal can be when used by someone who has technical as well as artistic ability.

Comparing one artist to another is maybe a little silly, especially in fractal art where the tools and techniques are so different, but many abstract artists like Klee were fascinated or even obsessed with geometric imagery and often produced imagery which had – in general appearance – characteristics which are quite similar to work like Sam’s.

I have no doubt at all that many of those great artists like Klee would be working at least part-time with fractal programs if they were alive today. The creative process would be much different, in the way in which photography differs from oil painting, but the exotic imagery that fractal programs produce would be too enticing for them to leave to others to explore. They wouldn’t produce exactly the same kind of work that they did with the traditional hand-made methods, just as Sam doesn’t produce work exactly like Klee’s, but fractal tools can produce work that is equally impressive, even if it lacks the hand-made touches like faces, trees and other realism that much of Klee’s work incorporates in some way.

A work like Samuel Monnier’s here would not look out of place in any modern art gallery in my opinion. Even in a classy, art-rich country like Switzerland – the chocolate headquarters of the world.