Hey, that’s the name Paul DeCelle gave to it. I kind of like the serial number, date-stamp theme. Didn’t many of the great classical composers give their works names like, “Symphony #4 in A minor”?

This recent work by Paul DeCelle (Feb. 24th, 2008, maybe?) is exceptional in many ways. First off, it’s a nice piece of Fractal Art, which makes it an exception in the great wasteland of what the genre seems to be coming to. I see most artists simply producing variations of the same old themes, but since I’ve been following Paul’s work for about three years now, I’ve noticed a steady progression and refinement of old styles and a perennial interest in creating new ones in his work. 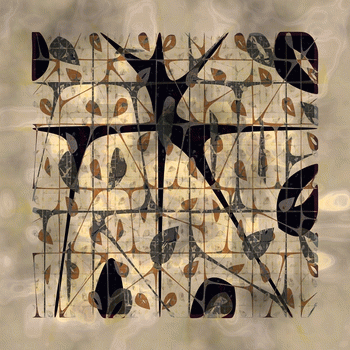 I’ve criticized layering because it’s often used in a crude way to reinvigorate cliche types of imagery and thereby attempt to compensate for what can only be achieved through pursuing new ideas — recycling vs. experimentation. Which brings me to the second exceptional quality of this work here: Exceptional use of layering.

Notice how the background layer looks like a background layer and compliments the rest of the picture and doesn’t interfere with it? Secondly, the colors go together well and set each other off. There’s a variety of clear solids (the black) and also detailed areas which display the other layers in various ways (i.e. interesting, not predictable).

I was told once in high school art class that a good design could be measured by how long it held your interest. The image should make you curious enough to want to examine it more. Good layering can do this and unlike most fractal artists, Paul knows how to do it well.

In fact, I think layering is the trap of most Ultra Fractal artists. It’s easy to do, but it’s not easy to do — well. The challenge is to create a composite image that doesn’t look like it’s a composite image. They should fit together like pieces of a puzzle. Think “symphony” not “tossed salad”.

Fractal Art is a shrinking genre. Right now I think it’s evolving from what started as a scientific novelty which attracted a crowd of curiosity seekers. There’s still a steady but much smaller stream of curiosity seekers today who pick it up for a while and then move on when playing with fractals no longer thrills them.

But there is a small number of people who have made the jump from “imitating the heroes” to getting creative with fractals. They don’t all choose the same software, but the software they use — they use creatively — they do new things with it and make new things with it. That’s why they make art and the rest make calendar decorations.