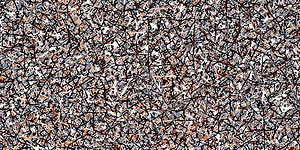 While writing a recent posting, I was Googling to find Mark Townsend’s orbit trap works done using the image importer, Sprite, and I surfed head first into a coral reef of Neo-Pollockian Artworks at his gallery site, Fractal Dimentia. Like Odysseus from the old Greek stories, lost again on his journey, I exclaimed, “Truly this is the very temple of Pollock!”.

But seriously, I’ve chosen these images of Mark’s for Image of the Week because I quite like them, although I’m sure there are many who won’t care for this sort of style, just as there are still many who don’t care for the classic drip-paintings of Jackson Pollock that now sell for an awful lot of money and receive lofty critical praise. Actually, I prefer Mark’s “paintings” to those of Pollock’s, but that’s just my personal opinion. (Perhaps, art investors should start buying up some of these at today’s, undiscovered, prices.) 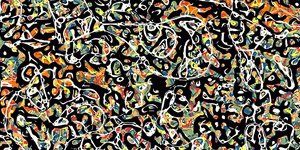 I think imagery like this deserves it’s own category and I would suggest the term, “Granularism”. You won’t find that term anywhere else; I just coined it. I say “granular” because it’s a large assemblage of smaller, micro-images that form granules or smaller, independent parts. (It wasn’t made that way, but it to me it has that appearance.)

One could simply shrug off work like this as nothing more than elaborate “textures”, but that’s the sort of thing that separates the artists from the tourists in the world of art. It’s the skilled or talented eye of an artist that sees something noteworthy or substantial in imagery like this and pursues it and refines it.

Mark’s been pursuing work like this I’d say for several years as shown by some of his earlier work which is just as interesting. One can see the development and refinement of this image style by viewing his entire gallery chronologically (older to newer).

In terms of Fractal Art… Is it Fractal Art? I don’t know. But it’s certainly generated as opposed to hand made. But even if it was hand drawn or whatever-drawn it shouldn’t really matter — there it is, make what you like of it. Scientists are still studying Jackson Pollock’s work (yes, scientists!) and have discovered patterns suggesting that Pollock inadvertently created chaotic systems while working with his drip apparatus of dripping paint cans suspended on ropes which Pollock struck with a stick to induce vibrations. Some have suggested that Pollock’s drip paintings have fractal qualities to them. How’s that for extending the boundaries of Fractal Art? 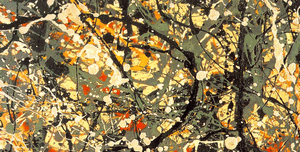 Fooled ya. This is one’s by Pollock.

Anyhow, in terms of Fractal Art, these granularism works are good examples of how one can produce interesting work without focusing on the usual things — major structures like spirals or mandelbrot figures or other “macro” forms — and instead pursue the internal qualities of fractals — the minutiae — the dust of art, where diamonds lay. I’d like to see more of this type of work but it’s not the sort of thing that is commonly produced. As for Mark though, I’m sure we haven’t seen the end of his exploration of this type of imagery. In fact, I think he’s just getting started and there’s even better stuff to come.