Welcome back all you faithful Orbit Trap fans to this week’s episode of, “Image of the Week”.

Well, as you may have guessed from the title, this review is not going to be pretty. Keep your shoes on. There’s plenty of broken glass around in here.

As usual, I was surfing along on my way to something else when I hit this rock. Ouch.

I probably would have just gotten back on my surfboard and zipped away, except for all the contortionist back slapping going on and the hallowed heights this particular image was being raised up to. Keith was named as “Artist of the Month” there on Renderosity for May, and in the little write-up they had on him, he described this image as his “most recent favorite”. 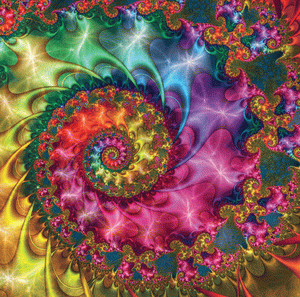 As many people in the fractal art world are aware, Keith has done some very impressive work assembling fractal images to make up complex scenes like coral reefs (complete with fish) and flower-like arrangements that are very eyecatching, unique and popular. I’m not knocking the guy for those, because for work like that Keith really is an example for others to study and ought to be praised for it. That sort of work isn’t easy to do and requires real technical skill and opens up all sorts of creative possibilities for fractal artists.

But the image he describes here as his “most recent favorite” embodies everything that I think makes Fractal Art cliche and boring.

It’s not because it’s a spiral. Spirals can be a very versatile and fertile sub-genre of their own and are capable of producing new and interesting imagery (in what has now become a classic fractal theme) when dealt with in creative ways (note the word, “creative”). This one here, however, doesn’t show any of that sort of creativity and is just a very dull, and uninteresting spiral. The coloring (which is often what saves mediocre work like this) isn’t particularly interesting or creative either. What is this thing good for?

The Fractal Universe Calendar! It wouldn’t even look out of place if it was featured on the cover.

It’s funny. I guess I must be the only person who didn’t know this image had already been picked for the 2009 Fractal Universe Calendar. I wasn’t even aware of that when I started to write this posting. It wasn’t until I went looking for links to include that I started to read some of the (very flattering) comments posted on its gallery page on Renderosity. (Whoa. A lot of folks really love this one!) One of those comments congratulated Keith on having the image chosen for – the cover! That’s how and when I discovered that what I had been joking about in my posting had already become reality.

“The stuff piles up so fast in the Fractal Art World you need wings to stay above it” (Martin Sheen, Apocalypse Now, …more or less).

Why don’t they put some of Keith’s good stuff in the Calendar? Keith also makes artwork that is very professional looking and original. His fractal flame assemblages I mentioned earlier, although not really my sort of thing, personally, have a thousand times more creativity and interest to them than these cheap plastic pinwheels. Can it really be that people would rather look at those worthless spirals instead? Why not just one image that’s a little different? It would sure make the “horrendous” job of editing easier. At least it wouldn’t be so hard to tell the images apart when they’re “sorting” them.

I can honestly say that I consider the Fractal Universe Calendar to be an embarrassment to Fractal Art. It’s not even good eyecandy, its just a lot of mediocrity, rehashed year after year; variations on a theme that was already boring 10 years ago. All it’s doing is perpetuating the stereotypical image that people have of fractal art as being stupid wispy spirals. Keith’s front cover up there is a prime example of what has come to be an annual collection of the most shallow, juvenile, tasteless fractal art imaginable.

Well, there you have it folks. That’s all the time we have tonight. Tune in next week for another fresh and never before seen episode of Image of the Week.

11 thoughts on “Darts for Keith”