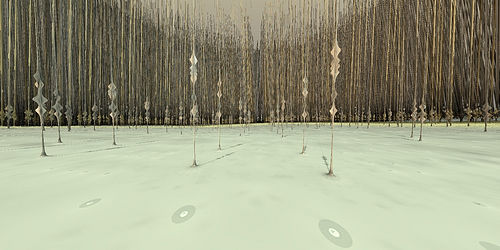 I just think it’s great.  It’s a strange, surreal place, nice composition, not oversaturated with detail and has nice, subdued but engaging color.  Check out the artist’s little story about the image:

Description: This is a result of an intentional hybrid from the 3D navigator anomaly of combining two different works. At first I thought it hadn’t created anything but a bunch of close black lines. Then decided to follow the lines back to the source where a faint light emanated.
http://www.fractalforums.com/index.php?action=gallery;sa=view;id=7990

A serendipitous find while experimenting with, I’m not sure what, in Jesse Dierks’ Mandelbulb 3D.  An “anomaly”?  What strange and wondrous things fractal programs can be.  We are living in the legends of the future.

I have no idea who “CO99A5” is, but he or she has only been uploading images to FractalForums.com (the place to be) since July 7th of this year, a mere three weeks ago.  No other website links.

The color palette is so good.  Few 3D fractals have really nice, tasteful coloring.  Maybe it’s just too hard to work with or the 3D folks don’t care to adjust things in a graphics program.  Many of the 3D folks at Fractalforums.com are serious tech people and I get the feeling they’re doing all this for scientific research purposes.

Leafless trees, snow on the ground, dim sky –night is falling.  Or perhaps it’s already night, a winter night, and the snow is bright and glowing because of a full moon.  There’s a distinct shadow because the full moon is behind us, shining through a clear patch of sky while the distant sky is thick with clouds that reflect the light off the snow.

I’ve seen it before.  But never in a fractal image like this.  Good work, CO99A5 –whoever you are.