I deleted lycium’s (Thomas Ludwig’s) original comment to my posting about Fractal Art isn’t Rocket Science. But his expansion on the theme expressed in his original Orbit Trap comment grew to become an interesting work of art and well worth reading. It was posted in the fractalforums.com site, where I recently found it. It’s not exactly a “positive” review, but for someone like me, any attention is exciting.

A word about criticism. I once read about a sage who adopted the habit of sending all his new students off to listen to his critics. He defended this somewhat unusual teaching practice by saying that until his students had refuted the claims of his critics, he could not begin to teach them anything. I hope you will take lycium seriously and consider the possibility that what he says about me could quite very well be the truth.

Copied verbatim from fractalforums.com. The boxed, indented text is the quoted references from my posting to which lycium responds. His responses are the regular text which follows:

just when i thought orbit trap couldn’t get any worse… tim posts this gem: http://orbittrap.blogspot.com/2007/09/fractal-art-isnt-rocket-science.html

i want to take a little time to reply here in detail, where more programmers can see what this man thinks of us.

Quote from: Tim
Would it help me if I had such a solid math and programming background as these super stars did? It doesn’t seem to be helping them out too much.

now honestly, how can someone with such earth-shatteringly poor “artworks” (which bear essentially no fractal traits at all, ignoring the 16 colour lsd-inspired palette) even think to question the works of others, let alone the forerunners of our field?! such collosal arrogance is SO rare, even among arrogant people.

Quote from: Tim
Moving on. What confuses things is that the “tool-makers” can also perform the role of “tool-users”. But the skills and abilities that lead to good tool making are irrelevant when it comes to using those tools to make art.

as if he would know; as if he has the faintest inkling as to what sort of skills and abilities it takes to design a vast fractal parameter space, or a flexible colouring algorithm, or a simple control system and all the other things necessary to hide the reality of fractal generation.

Quote from: Tim
They might as well be two different people because when the “scientist” takes up the tool he made, he begins the same process of discovery as everyone else who takes up that tool.

Quote from: Tim
“Crafting nunchuks vs. swinging them like Bruce Lee.”

Quote from: Tim
Sure, the tool maker immediately knows how to operate the tool,

allow me to inline a quote from just sentences earlier: They might as well be two different people because when the “scientist” takes up the tool he made, he begins the same process of discovery as everyone else who takes up that tool.

… and here is the tour de force:

Quote from: Tim
Actually the tool maker may have a handicap: he may think he has an edge over the one who is merely a tool-user and come to think his tool-making experience gives extra weight and an enhanced quality to his artwork.

Quote from: Tim
Artistic activities, on the other hand, have psychological challenges (objectively evaluating your work; creative inspiration) that the quantitative sciences have less of. 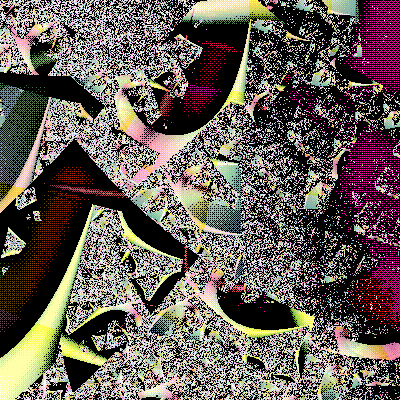 too bad he has neither: (selected from his many “cutting edge” block wave filtered images; there are plenty of these littered about the blog)

tim is just as poor a spokesperson for the social sciences as he is for the fractal community (quoted from http://orbittrap.blogspot.com/2007/09/orbit-traps-change-of-format.html): We invited the Fractal Community to speak for themselves and they didn’t want to. We spoke for them and they told us to shut up.

Quote from: Tim
Furthermore, the precision and absoluteness of the quantitative sciences creates a mindset or approach to art that I think can be a stumbling block in the evolving, shifting, combinant and recombinant, alchemical world of art.

nevermind “different perspective” or “broader view”, it’s a stumbling block to have a clue how the software you’re using works. yup.

Quote from: Tim
But Fractal Art is Art; it’s got its own set of skills and talents, which in the same way, also count for nothing when applied to the world of mathematics.

no, you utterly fail at logic. having a grasp of basic maths DOES help with making fractal art. you just wouldn’t know because you don’t have it, so stop being so damn presumptuous and cocky.

5 thoughts on “I’ve been reviewed”