What exactly does it mean to be un-Cola?  Cola drinks, like Coca-Cola, are dark-colored and contain caffeine.  The opposite would be light-colored without caffeine?  But both of them are sugary, carbonated drinks sold on the same shelf and dropping out of the same vending machine, or at least side by side vending machines (7Up is a product of Pepsico, Coke’s rival).

To those who like soft drinks and don’t like colas, then 7Up is perhaps very different.  Refreshingly different. But for those who are simply thirsty and don’t want to eat 10 teaspoons of sugar while trying to quench their thirst, 7Up and every other soft drink, including all the various members of the vast cola club, are all one thing:  cans of liquid candy. 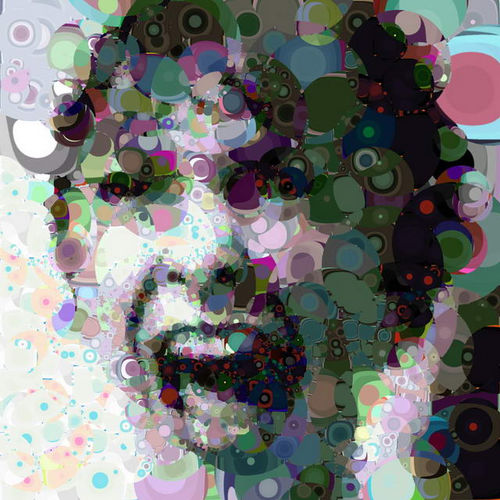 These mosaics, including the so-called mashups that are made of tiny images, are a kind of un-cola with respect to fractal art.  Their ingredients, like 7Up’s ingredients, are fundamentally different and yet seem to have all the same sweetness and fizz of regular fractals.

They look like fractals and from a purely visual standpoint, I enthusiastically declare them to be fractal art and insist they take their rightful place in that great vending machine –shining humming monolith of cold drink correct change worship– called fractal art.

And they’re cool to look at.  And maybe not so hard to make, either?  This one above I believe is a rendition of the screaming woman in the shower scene of Alfred Hitchcock’s Psycho.  There’s something called actionscript which does some really neat things like this.  Flash artists do similar things.  I have no idea how it works.  Wouldn’t it be funny if they used some type of fractal algorithm to scale the mosaic pieces?

You can view a whole bunch of them here on Village9991’s Mosaici page.  He’s Italian and lives in a small village in northern Italy. 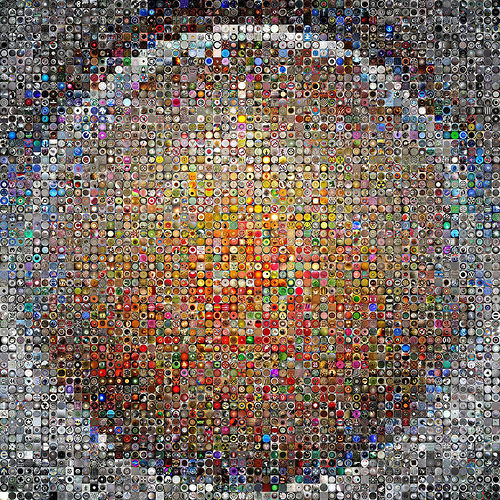 The full-size (1800×1800) image is here and is worth a look.  The details in this mash-up are quite appealing, unlike most which get ugly when you move up close.

Jim Bumgardner is a Flickr master and has done some prominent things:

I’m a computer technologist / artist / composer in the Los Angeles area. I blog about my various projects at krazydad.com.

I’ve done a lot of mosaic art using the Flickr APIs, and co-authored Flickr Hacks, from O’Reilly, with Paul Bausch.

I did some mosaic posters for squared circle, and a day in the life, here on Flickr:

I also made the world’s first Flickr Chia Pet, an experiment in collaborative defacement.

I made something similar once, using a photoshop filter called Mosaic Toolkit by Lance Otis.  Over here. 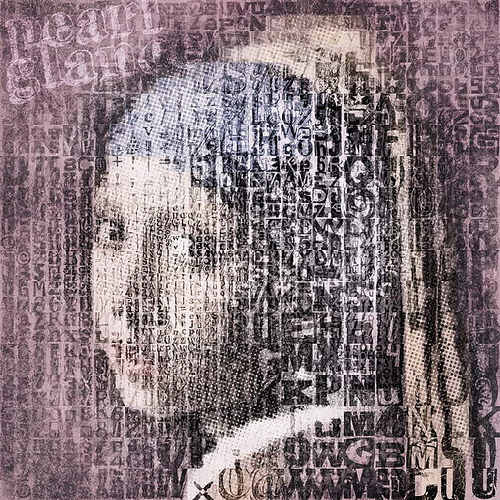 Whaddaya know?  It’s the same guy as made the first one!  Well, I guess he’s got some sort of program to make these with because it would take a lot of work to draw these things even with a computer drawing program.

The woman, in case you don’t recognize her, is a detail from some very famous painting.  But here her image is made up of all the senseless words that people in art galleries have spoken while viewing the painting.  Individually, the words are gibberish and without any meaning.  But together they “speak” her image in a new but equally appealing way.  Some of the smallest comments are crucial details.  The other deep message in this image is: if you’ve got enough fonts installed on your computer you can do anything!

Time for another one: 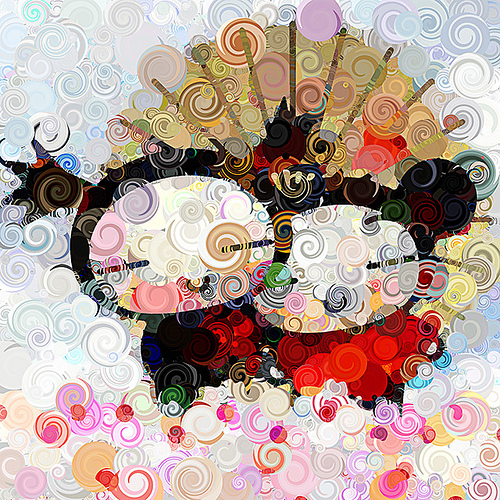 Steal a Kiss by Village9991

Well hit my avatar with a digital two by four.  Same guy again.

He says it’s from a Pucca cartoon: YouTube Link.

The image has changed: it’s full of details that have their own (short) story to tell.

After watching a Pucca cartoon I now see the image differently.  I can clearly make out the two Pucca cartoon characters.  Nevertheless, the graphical effect is what makes this image interesting for me.  Those of you who are fans of the Pucca People you might feel differently.  Which is the greater art?

I never intended to focus on the mosaic images of just one artist.  Incidentally, the way I review these things is a multi-step process and details like names often get temporarily lost in the shuffle.  First I wander around the internet and when I come upon an interesting image I bookmark the page.  This stores the link to the original (obviously) along with the image and any references to a title and author’s name.  Later on when I’m thinking of writing about something I go back to these collected bookmarks and I open up 10 or so from a single sub-folder bearing some (at the time) relevant name.  The folder names are often just dates like “June” or “May” or “3D”.  Digital art in general and fractal art as well is such an eclectic medium that meaningful sub-categories are hard to come up with.  And author names quite often aren’t the common ingredient in a particular graphical theme.

But sometimes they are. For me it’s all about art and not artists.  But you have to include the author’s name if for no other reason than readers want to know who made it.  Sometimes there are legal reasons such as attribution requirements.  Artists are less important in fractal art because individual accomplishment is more about the style of pushing buttons and operating the machine than it is about actually interacting with the canvas in the intimate way that painters do.  If you do what they did then you’ll “make” what they made.