I want to talk about the money in fractal art. 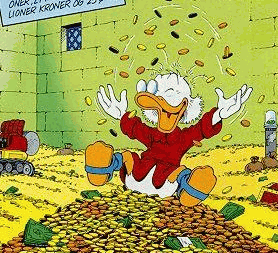 Is this the financial forecast for Ultra Fractal sales?

Of all the artists, programmers, publishers, online instructors and other types of individuals in the fractal world, who would you say would be the most likely to be making some serious amount of money?

My first guess would be Ultra Fractal author, Frederik Slijkerman.  Ultra Fractal currently sells for $69 US for the standard edition and $129 US for the full featured, animation edition.  It’s a very popular fractal program and has been for ten years or so and is an ongoing concern as they say in business circles.  But has it made Frederik so rich that he’s moved into a castle and spends most of his time in his counting house counting all his money?

I don’t think so.  As far as I can tell, Frederik spends most of his working time at a regular (non-fractal) programming job.  (His Linked-in profile) I’m sure he’s making something off his sales of Ultra Fractal, but even if there were 500 paid-up users of UF5, and I think that’s a gross overestimation, that works out to about $35,000 US.  But put that in “earning a living” terms and it’s not much of paycheck compared to a regular job.

So, Frederick, of all people in the fractal art world who I would guess to be in a commercially viable position is probably making more money at his day-job than at his “fractal-job”.

I wrote a post last year entitled Is The Name Of Our Hero Benoit Mandelbrot Being Used To Market Ultra Fractal?.  But now I’d say that even if anyone ever had the idea of attempting to promote UF via this contest (and why would anyone think that?) that now it’s obviously a waste of time.  There simply are not enough users of fractal art software to generate even a modest income on an ongoing basis.  In short, I think Frederik’s motives in creating and selling UF are more personal than commercial.  I’ll bet he could make much more money with the time he spends developing UF by putting it to use on projects of a purely commercial and straightforward business nature (i.e. his day-job).  The fractal art world would have to change considerably, such as grow significantly in size and become much more trendy for this to be any different in the future.  And who’s to say most of those newcomers wouldn’t opt for the freeware program ChaosPro?

“More personal than commercial“.  I think this sums up all the rest of the fractal world from a money-making perspective.  But let’s look at online instruction anyhow, which, like UF,  is something that has had ties to the Benoit Mandelbrot Fractal Art contests via the judging panel.

No, there’s not much money there either!  Courses were about $25 US for a ten week course (two and a half months) and twice that for double semester courses.  Assuming you were a very keen instructor and you taught four course semesters a year and had a full class each time (not likely) what great pile of cash would you be rolling in at the end of the year?  Ten students a course, for instance, four times a year, and you (the instructor) get what?  Well, you wouldn’t get the whole $25 tuition, you’d have to split some of it with the online school who have their own administrative expenses to cover (and they want to get rich too, right?).  How about you get $20 per student at 10 students per semester and four semesters a year?  That would be (a whopping) $800 US per year. 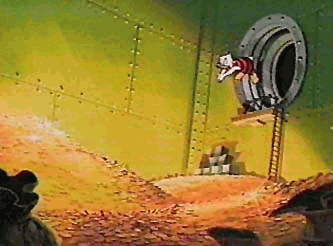 Look before you leap --into the riches of online instruction!

Of course, if you’re trying to cover the rent  and buy groceries (you can’t get rich if you die on the way) then you might consider teaching more than one course.  Say you managed to teach 3 per semester.  3 x 800 is $2,400 US per year.  This is beginning to sound like a Get Poor Quick Scheme.  If money’s an issue then you need another job or you’d better just stay with a day-job.

Not surprisingly, none of the current or former judges of the Benoit Mandelbrot Fractal Art Contest are teaching online courses anymore.  Did they make too much money and decide to retire?  I don’t think so.  Their interest was, again, “more personal than commercial”.  I suspect they simply wanted to explore the option of teaching UF skills in an online environment.  Sure, there’s some money to be made, but it’s a token amount which might be some compensation for the instructor’s efforts but not a serious way to make a living or elevate one’s standard of living.  Would such a fractal-job income mean anything if you were applying for a mortgage? or a business loan?  Or how about bragging rights at a cocktail party?  “Hey, that’s nothing, man!  I’m a professional online fractal instructor and I made eight hundred bucks last year!”

Now how about selling artwork?  That ought to be worth something.  Hey!  Isn’t that how Picasso and Warhol got rich?  Ironically, I think this is probably the least profitable enterprise in the fractal art world.  And why would I say that?

Well, for starters, fractal art, like all digital art, is not collectible.  You can’t buy an original fractal print like you can an original painting.  You could print a limited edition of images and then (honestly say) you’re destroying the digital files (image and parameter files) just as print-makers destroy the original printing plate for art prints they sell after printing a numbered series of prints.  Throw in your (really famous) autograph into the package and then charge a bundle.

But the big problem with fractal art is that there’s so much of it around and it’s so easy to make.  People can shop around and find similar stuff for sale cheaper or even make it themselves. Can’t do that with Picasso’s paintings or Warhol’s silkscreens.  And of course fractal art isn’t as popular and as critically acclaimed as such traditional artworks are.  There’s probably money to be made in selling prints or fractal art for illustration purposes (book-covers, magazines…), but again, it’s some money, not enough to live on much less get rich at.  Yes, I think we’re back to the “More personal than commercial” aspect to things.

Alright.  Now I come to my main point in all of this:  Issues in the fractal art world are not taken as seriously as they would be if there were commercial interests at stake.

For instance: nobody really cares how the Benoit Mandelbrot Fractal Art Contests are run because winning or losing is purely a (temporary) matter of online status and has no impact on art sales or any other fractal commercial enterprise in any really significant way.  Maybe a few more UF licenses get sold because of the publicity, but I doubt it has any significant effect on anyone’s personal wealth or lifestyle.  (Actually, there is very little publicity generated by the BMFAC, isn’t there?)

I’ve seen artists advertising images on their websites as “Winners” in the BMFAC, but the real commercial opportunity would be selling prints right at the exhibitions themselves or at least taking orders.  Despite the other failings of the BMFAC, they have succeeded wonderfully in preventing the contest from becoming commercialized.  They don’t even sell a simple $10 souvenir poster or  wall calendar.  They could easily do this online from the contest site as well as from a table at the exhibition (hey, who needs a table? just stand by the door and sell them like newspapers).

Yes, the fractal art world is almost ascetic in it’s attitude towards fractal art and community events like contests.  We’re all in it for the art or for other things that have never had any commercial value like the social scene.  I believe that will change if fractal art ever develops a serious commercial side to it.  Until then it’ll continue to have the casual atmosphere of a community art club where even the big names are involved for reasons that are “more personal than commercial.”

6 thoughts on “Fractal Art: No Money”