I found this email in my inbox just yesterday and quickly felt my fractal art commentary sap rising boldly in my branches.  Here, read it carefully and see if it has the same Spring-Time for Fractaland effect on you:

The Entry Submissions time frame for the “FractalForums.com Spring 2010 Fractal Art Competition” has now ended.  This submission period set a new record for Member Activity on the FractalForums, with around 650.000 Page Views!!!

We would now like to enter the voting period, which will last until the end of May 2010.

We have a total of 130 entries to the three different competition sections.  And due to the large amount of entries, please take your time to review each of the submissions and give a reasonable vote for what you consider “best” images per category.

Only the Gallery votes count for the results.  So, no external embedded video Sites Rating system is taken into account.

The ranking will be as follows:
– highest average rating
( if tied for same position, then )
– most votes
( if tied again, then )
– sharing of winner placement

Again, we ask that you please take your time and review each category of the competition, the sections are as follows:

•  Mandel Brot  —  Only views of the standard z^2+c Mandelbrot set and Julia Sets where allowed, and this section has more than 47 spectacular entries:
http://www.fractalforums.com/index.php?action=gallery;cat=38

•  Fractal Fun  —  Contains computer generated fractal art of any kind.  This section was the most popular with more than 64 entries.
It is a vast mixture of state of the art Mandelbulb renderings and beautiful 2-D creations:
http://www.fractalforums.com/index.php?action=gallery;cat=37

•  Fractal Movies  —  For the first time in the Forums’ history, there was a movies/video section, with a total of 19 entries.
You will encounter interesting new locations of the Mandelbrot, plus amazing 3-D fly-bys and inside explorations. Enjoy a total of 40 Minutes of extraordinary Fractal pleasure:
http://www.fractalforums.com/index.php?action=gallery;cat=36

Well the internet is a wild and wooly frontier place of lawlessness and I intend to judge this here contest right here!  But before I pull out my six-shooter to choose the winners (and scatter the losers), I’d like to ask the question, “What’s up with this FractalForums.com place?”

It’s been around for a couple of years and that’s the strangest part of it.  Fractal forums and other community venues almost always fold up after the intoxication of the opening event wears off.  That’s about 3-6 months, I’d say.  That’s how it was for Orbit Trap’s campfire singalong days.

But FractalForums.com is still singing and the campfire isn’t going out.  What is FractalForums.com doing right that Deviant Art, Renderosity, the Ultra Fractal Mailing List and so many other community venues  (largely dead and forgotten) have been failing at?  Half the postings there on FractalForums.com annoy me and the other half seem unimportant.  Is that the magic combination for a vibrant and self-sustaining community site?  Something for everyone and a steady stream of provocation?

The web-rings are no longer breathing.  They were a great idea in the 90’s but Google has done a better job of locating fractal art sites for the last 10 years.  The community art sites are brain-dead; Flickr’s beginners out-perform Deviant Art’s masters on a regular basis these days.  I have no idea why FractlForums.com should be thriving in such a wasteland, but it is.  Maybe there’s something about the social environment at FractalForums.com that draws in people from the old stuffy places? –and keeps them coming back.  Something nourishing and enticing?  What could it be?

Even I’ve joined in on some of the threads over there and I almost always avoid opening my mouth in a forum these days.  If a place like that can engage someone as jaded as me then there must be something special going on, whatever that invisible quality might be.  I’m even reviewing their contest and I find art contests distasteful.   Based on all that, I guess I ought to say that the first prize should go to FractalForums.com themselves in the category of Most Relevant Fractal Art Community Site.

The email tells me that there’s three categories to the contest and that they’ve been carefully defined.  But the first lesson in judging art is to stop listening to the people around you and ignore the boundaries they’ve constructed.  Trust no one.

I’ve made up my own categories and the first is a general one and I call it the At Last! Something I Wish I’d Made And Could Take Credit For –category.

And the winner is… 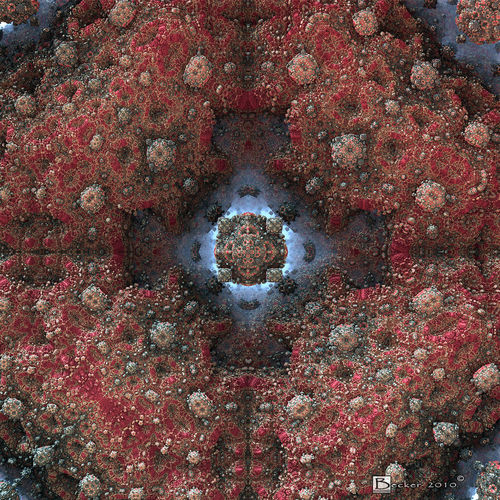 My Secret Garden by SaMMy. Click to view full-size at FractalForums.com.

My next category is one which most fractal artists will immediately relate to.  I call it the Astonishing Thing That I Cannot Describe –category.  The winner is obvious, but only if you view the image full-size.  For that reason I’ve only included a link.  No thumbnail or fair-use version can do justice to this great golden vision.  You have to go there and see it life sized or not at all.

Next, a category for which there was really only one serious contender.  The Best Rendition of Bocklin’s Isle of the Dead I’ve Seen Recently –category.  The author calls it “Mandel-blob” but remember: when judging art stop listening to others even when it’s the artist themself speaking.  I think this one’s my favorite.  But that’s not a category. 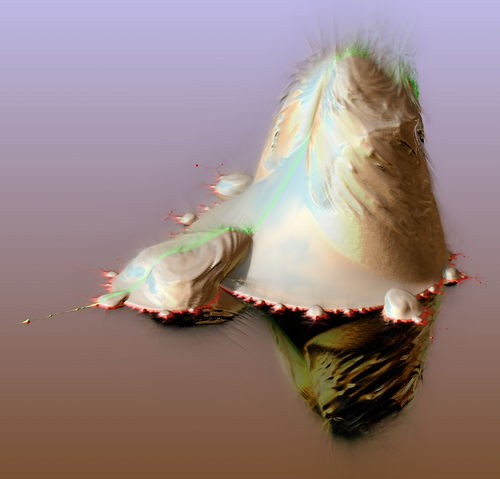 Hey!  It certainly is the year of the Mandelbulb, isn’t it?  My next category is the Best Rendering of the Mandelbulb Formula, Now Let’s Move On To Something Else –category.   This one really is very nice.  I’m not being sarcastic; the coloring and shadows and detailing is very well done.  Congratulations, Kraftwerk, for making something new out of something that’s become rather stale very quickly.  Nice screen name too.  That isn’t a category but might be one worth adding next time. 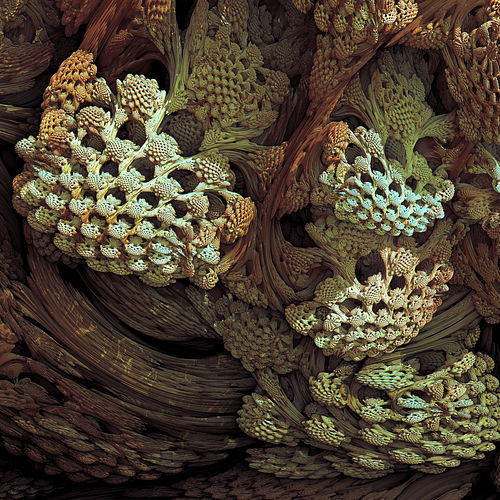 Did I saw let’s move on from the Mandelbulb?  Next category is Second Best Rendering of the Mandelbulb Formula, This Could be a New Genre and the winner is Kraftwerk, again.  Maybe it all depends on how you render these formulas and not the formula itself.  There’s something majestic about this image.  It’s got something impressive and attention grabbing about it.  Back in the old days of vinyl records this would have made a great album cover. 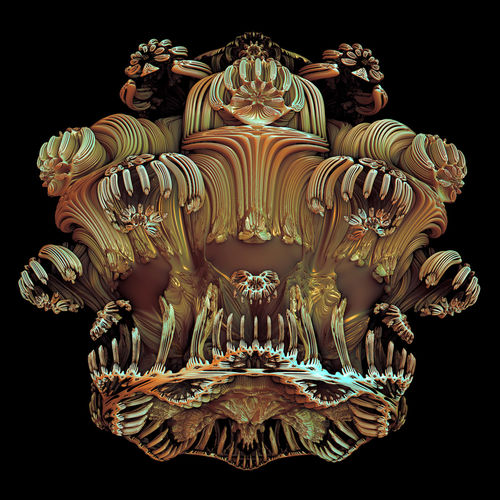 Golden and Delicious by Kraftwerk

Next up is the Hey, I Like Those Colors But I Bet No One Else Will –category.  I don’t know why palettes like this are so uncommon.  There’s a real retro Sci-Fi mood to anything using these sorts of muted colors.  Maybe it just doesn’t appeal to the young folks? (I’m 45). 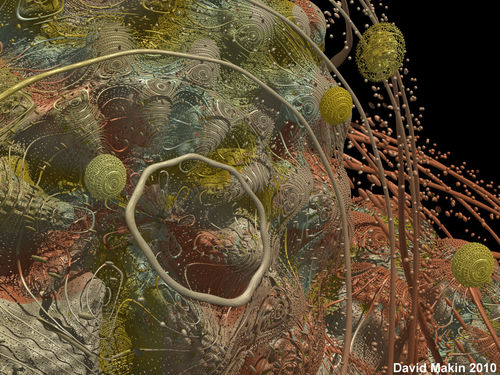 The final category, the You’re A Better Man Than Me Gunga Din –category.  It’s an animation.  Two weeks of rendering?  For me, two minutes to render something is too long.  The winner is Buddhi with Flight Through BulbBox a very detailed and extensive 3d fractal tour.  Two weeks!  He must have more than one computer.

Wait, one more category:  Not Really Part of the Contest But It Should Have Been.  I guess these stills in the animation section were just meant to be placeholders or something, but this one looks great. 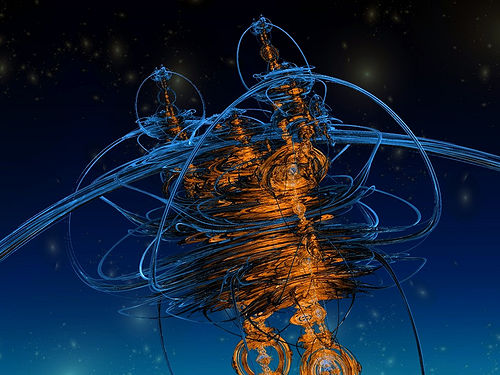 Dangerous Spaceship by "bib" (not bub!). Click to go to FractalForums.com page for video.

I’d say Dangerous Spaceship is one of the top five images.  And I’ll bet it’s not even part of the contest, technically speaking.

Well, contests are like that.  The winners don’t always win.