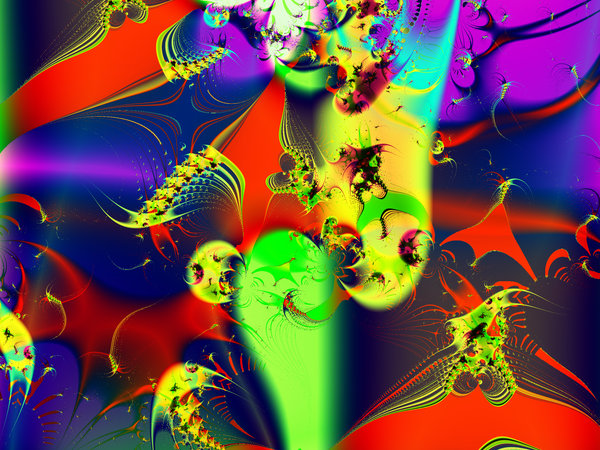 In the same category as room-temperature fusion, perpetual motion and the age-old alchemical quest to turn lead into gold, is added yet another bold and fearful challenge: to make a piece of fractal artwork that rivals the depth of expression of Picasso’s famous painting, Guernica. I threw down this challenge recently albeit in a very off-handed way, via a blog posting and near the end of it, suggesting it was merely something mythical and hypothetical which would be good for one to contemplate and aim at, even if it was out of human reach.

Well, wonder of wonders, here it is — all algorithm and all art.  You could call it an accident, I suppose, but that’s the whole point of the hitherto mythical Fractal Guernica concept: algorithms don’t express anything other than algorithms.  If algorithmic art is just an accident then fractal art is all about chasing ambulances and spotting crash scenes.

For those of you who like big art, or are just getting old and need to see everything large, here’s a large version.

Anyhow, let’s get the discussion of rich, visual symbolism started, the kind which only a really great work of art can provoke.  Hopefully we’ll be able to decode everything the artist is trying to say, because these things can be pretty complex and convoluted.  And that’s without even attempting to psychoanalyze the artist or take a Marxist perspective.

What’s it all about?  Hey, slow down.  How about, what’s that bull with the half-moon head all about?   That’s what I saw first too (foreground, left).  Did the artist rip that right off Picasso or what?  Actually, we ought to get something straight, right off the bat: the artist is the algorithm.  What does an algorithm know about that?

The bull is actually a cow (unimportant) and is an allusion to the cow jumped over the moon nursery rhyme.  But the moon has now obscured the cow’s head and left it confused and blind.  This is a direct reference to the space race and how it got bogged down once it actually landed on the moon subsequently losing it’s direction and which since then has literally gone nowhere.  The strength of the space age has become deluded by it’s own achievements.  The big green thing beside it comes later.

Background, left (top,left) is one of the most shocking off all images.  It represents aircraft and perhaps bears some similarity to the original Guernica.  The airplane has a huge mouth and is attempting to consume the Earth (the blue round thing).  While in most of the world aircraft represent modern, advanced transportation, in other parts of the world aircraft are entirely different and play the role of the most voracious of all war machines.  Don’t think Boeing 747 Jumbo Jet; think Mig-29 or F-18.  If you’ve ever seen, and particularly heard, a modern fighter jet maneuvering in the sky above you, the deep rumble, the sound of the sky ripping apart and your chest reverberating, ear drums rattling — then this image is easily understood.  The aircraft is depicted not as a gleaming white bird, but like a crocodile, an ancient lizard with a long, teeth-lined snout, pursuing the Earth itself.  Snake of the sky, King of the Air.

Bottom, right.  It is modern man himself (herself).  Notice how long the arms are; very long, they’re extended.  Technology has extended the arms of modern man but at the same time weighed them down and reduced their choices.  The golden glow (a recurrent theme, representing technological enlightenment) distorts his face and his head is turned at an angle which is out of sync with the things around him.  There’s more, but it’s obvious.

Middle, right, above modern man.  The volcano has a strange eruption on top of it because it’s not a volcanic eruption at all — it’s an allusion to the Biblical tower of Babel on top of a natural tower, a volcano.  The tall structure is a broadcast antenna.  Broadcasting what?  Babel sounds.  The communication that links and informs so many all over the world is ultimately a source of confusion and something which discourages people from cooperating: propaganda; biased news reporting; stock manipulation, liar-mercials.  Well, it’s a small part of the total work, so let’s not dwell on it.

Above the moon which is on top of the cow’s head is a series of legged creatures enveloped in a golden glow (remember the golden glow?).  Bonus marks to the art history students who guessed, Bruegel’s Blind Leading the Blind.  Except in this case it’s the technologically enlightened who are blindly stumbling, one after the other.

Finally, the main element in this work, the golden glob of stuff dropping down (mid-picture) colliding with the green glob rising up.  The golden glob is filled with things coming down from above — space industry spin-offs — biotechnology, genetic engineering, creatures dark and intriguing.  The golden glob is the descending technological world which should be ascending, but has reversed direction and now comes into sharp conflict with the green movement of environmental responsibility and technological restraint.  (Notice the purity and simplicity of the green glob as contrasted with the complexity of the golden one, although there is something like a red scorpion with his tail sticking out, in the green glob.)

On the large scale, note how the elements are at the same time detached from each other and yet in collision with each other.  It suggests that their movements or trajectories are conflicting but not intentionally conflicting.  Instead, the collisions come from the expression of their nature and not any sort of conscious will — a sort of Babel like manifestation of decay through mental confusion rather than through conflicting or competing desires.  Everything just falls apart because it no longer has any connection.  The modern world is freedoms in collision.

Stepping back even further, there is some irony here that a work that depicts technology as some horrible thing destroying people and their relationships was in fact made using a fractal generator, one of the most technological of all things I would say.  In fact, I’m going to go out on a limb here and say that this artist is in fact a hypocrite; demonizing technology and yet at the same time using it to to make art just for fun.  Is he blinded by that golden glow too?

One thought on “Fractal Guernica”