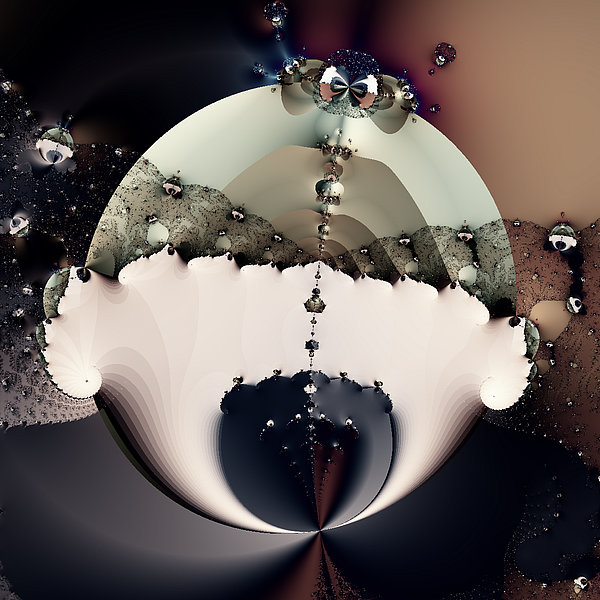 Made in Sterling2
(parameter file: shell01.loo )

That great fractal classic by Stephen Ferguson, Sterlingware, has been been reconfigured by Tad Boniecki (aka Soler7) with 50 new formulas and released for download as Sterling2.  And it’s totally free too.

Now many of you will know me as a sort of Sterlingware sage; the renowned author of Tim’s Sterlingware Tutorial, that classic guide to using Sterlingware 1.7.  I’ve spent thousands of hours experimenting with Sterlingware 1.7, the previous version made in 1997, and learned just about everything there is to know about it.

So you’d think a guy like me would have known that an updated version had been released — a whole 6 months ago!

No.  I only found out about it because I was surfing around and – I forget exactly how – found myself at Paul N. Lee’s list of fractal programs.  My first thought was how old and out of date these listings must be. I could remember visiting this very same web page back in 2002 when I’d first discovered fractal programs and wanted to find and try out every one available.  In fact, I think this was where I originally found Sterlingware 1.7.  So you can imagine how stunned I was to see right below the link to that venerable,  decade-old, SterlingWare 1.7, a brand-new link for SterlingWare “2.0”.

In mid-2007 I contacted Stephen [Ferguson], as I thought that Sterling was an excellent program that lacked one key feature – a formula editor. He told me that adding a formula editor would be a huge job and that in any case the development environment to compile all the parts of Sterling was no longer available, as it is obsolete. However, he encouraged me to do the next best thing, which was to change the formulae in the program. With his help I set up the development environment on my PC and was able to recompile Sterling and to make changes to just one part of the program, ie the formulae. Other parts could not be changed.
(from http://www.soler7.com/Fractals/Sterling2.html)

Tad seems to share my view of Sterlingware (aka SterlingWare, Sterling, Sterling-Ware).  The program does an awesome job of rendering fractal formulas and it lacks nothing in its creative powers except for just more of those formulas to render.  The natural response to this, as Tad already mentioned, is a formula editor (parser,compiler) which would allow users to input whatever formulas they like.

I don’t know all the ins and outs about how Sterlingware was built.  Actually I don’t know any of those sorts of things.  But I do know that Stephen Ferguson has other fractal programs, such as InkBlot Kaos and Tierazon, and they both have formula “parsers” which allow users to input and experiment with custom formulas.  I’ve used the formula parser in InkBlot quite a bit and it really extends the creative abilities of the program although it’s not as fast as the built-in formulas that come with the program.  Sterlingware is different in some basic ways, and this is what I’m sure gives it its special, photo-realistic capabilities.  Sterlingware does things that I’ve never seen any other fractal program do.

More of the story from Tad:

Between June 2007 and August 2008, I spent some 100 to 200 hours changing formulae (that’s the quick part) and then testing them to see which ones produced interesting images. It turned out that creating good formulae was much more difficult than I expected. In the process I made and saved some 1,600 fractals. That’s not counting about 30,000 that I partially made but did not save. I have finished this process, so Sterling2 now has 50 formulae, all different from those of Sterling.

“100 to 200 hours changing formulae”.  It’s a lot of work to produce even just a modified version of a program like this.  If Tad spent that much time just adding new formulas, I wonder how many hours Stephen Ferguson must have spent designing, programming, testing and debugging all the other parts of Sterlingware?  It takes real dedication and devotion to produce software of this quality.

I can confidently say that Tad has done a magnificent job in his selection of these formulas.  I’ve spent at least 10 hours over the last couple of days since I downloaded it (only 437K) and I’m very excited about the potential for making great images that these formulas have.  The image up above was made with one of Tad’s new formulas and it’s precisely the kind of formula that worked so well in the original Sterlingware (1.7) and is the kind of formula I would have hoped a new version of Sterlingware would have.  Tad’s new formulas are right up there in the same category as the original ones Stephen Ferguson included in version 1.7.  A really excellent addition to the previous Sterlingware version.

I want to stress that all credit for creating this program belongs to Stephen Ferguson. My role was restricted to modifying the algorithms. I also want to thank Stephen for helping me to modify his program and for allowing me to release it as freeware, here on my site.
(from http://www.soler7.com/Fractals/Sterling2.html)

Hey, that’s no empty, trifling comment that Tad is making.  Not only has Stephen Ferguson helped him out by providing the source code and help with configuring the “obsolete” development environment to allow for recompiling the program, he’s also allowed Tad to give away the revised program for free from his website!

Three cheers for Steve, man.  He’s made one of the greatest and most creative fractal programs ever, and now thanks to Tad, one  very talented and hard-working fan, it’s just been reloaded with 50 spectacular formulas for a 10-year anniversary encore performance.