What is Fractal Art Missing?

I look at da Vinci’s Mona Lisa and I see something.  I look at just about any piece of fractal art and I don’t see that thing.  What’s fractal art missing?  Why does it always seem to be missing something that other art forms seem to have? 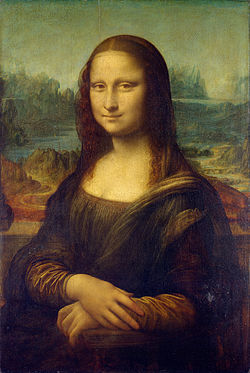 I use the Mona Lisa as an example because it’s well known.  I’m not really a fan of it, in fact my favorite part of this famous painting isn’t the woman’s smile, it’s the landscape in the background; that curvy snake-like road.  But even the background of the Mona Lisa has that “art” thing that fractal art seems to be missing.  It holds the viewer’s eye and just seems to do –that something.

I know what art is: it’s the life of the image.  It’s easy to tell the difference between living and non-living things.  That’s why I’m confident in saying that fractal art is missing something that the Mona Lisa has.

And yet fractals are fun and exciting and I think that’s what keeps us connected to them.  But I’ve been “connected” for almost ten years now and I think that’s long enough to ask: Why can’t fractal artists do what other artists can do?  I mean, why can’t they make art?

I visited the Prado once.  It’s a very large and famous art gallery in Madrid, Spain.  If you like art, any kind of art, you’ll enjoy having a day or two just to wander around the Prado.  I can’t imagine any piece of fractal art ever hanging in the Prado.  It just doesn’t fit with those things.  But why?

That’s the big question and I think I can answer it.  That is, now that I’ve been looking at fractal art of every kind for a decade now.  It’s the reflection that’s important, not the length of time.  But reflection takes time and after ten years worth I’ve arrived at some conclusions.

I think most fractal artists are hopelessly deluded.  But I’m jumping too far ahead.  I’ve divided all this into a series of five blog postings; parts 1-5.  This first one is to simply introduce what I think is the perennial question that pops into my mind whenever I start to wonder where fractal art is going or if it’s possible it will ever take any sort of place in the art world, meaning, will it ever be considered art by anyone other than those who make it and their devoted friends who cheer them on?

Why can’t fractal artists produce anything with the same artistic merit as artists in other mediums like painting, drawing, sculpting and photography?  What is fractal art missing that those other mediums are able to provide?

Maybe some of you don’t think it’s missing anything and that artwork with a similar merit has already been made?  Sure, I’d expect that.  After all, I didn’t say fractal artists were hopelessly deluded for nothing.  I know they are.  I once shared those juvenile notions about fractals until I began to wonder why it all looks the same and there’s never anything significant ever made.  I mean, anything worth hanging in an art gallery.

I don’t believe the hype anymore.  Rather, I’ve burst fractal art’s bubble and now see it as it truly is and how, ironically, I saw it in the very beginning.  Fractals are fun, exciting and sometimes marvelously mysterious and a special world of their own.  But I firmly believe that no one has, or ever will, create a real piece of art just by using a fractal program.  Fractal algorithms just don’t have what it takes to produce anything other than mere decoration or design.  As good as that can be, it’s lifeless when compared to real art.  Not dead; just missing something.

So close your gaping mouth and sit down.  You’ll get over it.  You can still call yourself an artist on Deviant Art.  Nobody will care.  (Or even know.)

Next: Part 2. What Fractals are Good For (upbeat, happy, rah-rah-rah kind of stuff)