Fresh and only recently uploaded to Fractalforms.com, the Times Square of Fractalville, comes this modestly named image, Stable Wormhole.  Created by none other than the author of the famous Mayan-something images, Reallybigname…

~Click on images to view fullsize on original site~ 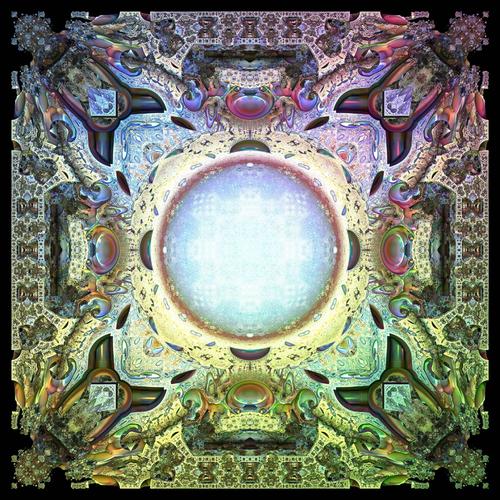 It’s part of the ever enduring mystery of art that images like this rarely seem to receive the sort of online reaction that I think they deserve.  Or is it simply that most viewers don’t see what I see in this image, or see it but don’t get as excited about it as I do?

First is the powerful circular symmetry and majestic structure to the image.  Fractals are particularly good at creating both simple structures and complex detail at the same time.  I can’t think (at the moment) of an image that demonstrates that as well as this one; it’s like a cathedral dome ceiling… 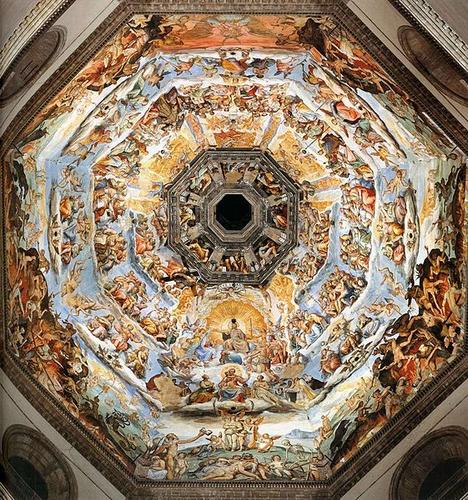 Actually, it’s even more ornate than this cathedral dome ceiling, although the cathedral dome is full of symbolism and tells a detailed biblical narrative.  But both images draw on the “energy” of highly organized geometric design.  On the other hand Reallybigname’s image is completely anonymous and as suggestive of mysterious things and powers as the similarly geometric religious images called mandalas: 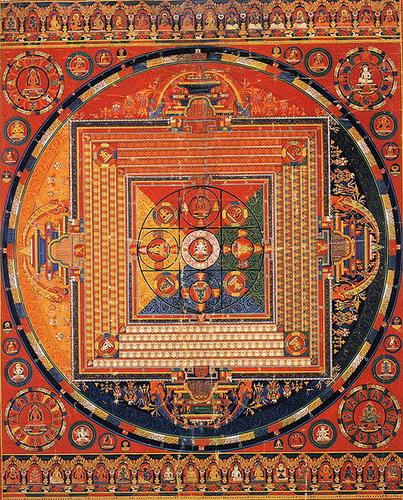 You see how “cosmic” such mandelbox creations can look?  Such imagery is both ornamental and at the same time powerfully symbolic, as if it was a religious diagram or text book chart as well as a piece of artwork.  And fractals often create very similar looking types of imagery (even if they’re not always appreciated right away).

It’s an interesting overlap between mere “beauty” and mystic symbolism.  I could go on: the theme of geometric order and strange, mystical symbolism is one which has always fascinated me about fractals.  Fractals are so simple and “harmless” and yet the multiple mathematical arms that draw them are something of a cosmic wonder themselves if you think about them.

Perhaps math is the one aspect of fractal art that can give it a greater value than that of being mere decoration and ornamentation.  Of course, one needs to be able to identify the mathematical “code” of the image and thereby know what they’re looking at.

I didn’t like the subdued coloring at first especially in the upper part, but I came to see it as very tasteful and sublime the more I studied the enormous amount of detail in the image.  The outer corners are rock like and stoney while the center is almost a hazy, glass like material, a bubble of something undefinable.

There are forests, islands, caves, smooth expanses and little scratches containing mysterious treasure troves that only the parameter holders can know of (the parameters are included on the Fractalforums.com gallery page).

The central parts along the edges look like animal bone cross-sections, but then as one moves towards the center we come across something like a crystal ball sitting in a miniature landscape of mountains and trees.

There have been a number of other mandelbox images like this.  A few I’ve even reviewed here on Orbit Trap before in the early days of the 3D rage, but this one by Reallybigname is a definite refinement of this particular 3D fractal art form.